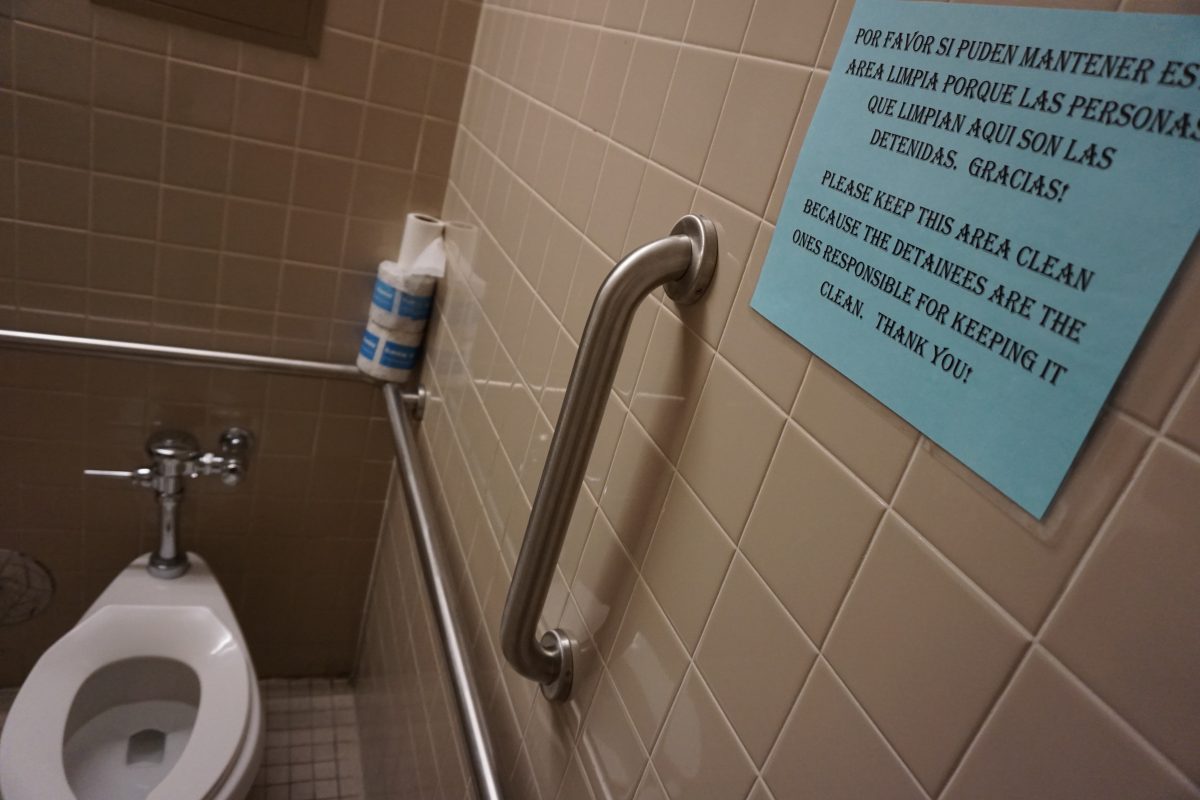 A sign in a bathroom at the Aurora detention center says detainees are responsible for cleaning. (Photo credit: Hannah Leigh Myers)

Attorney General Jeff Sessions traveled to the US-Mexico border in Arizona this week, where he issued new guidelines for ramped up immigration enforcement. He ordered additional charges be brought against undocumented immigrants when possible and directed that repeat entrants be charged with felony crimes. The new guidelines also call for the prosecution of anyone involved in transporting or harboring undocumented immigrants. While the stated goal aims to target people smugglers, members of mixed status families fear that provision could be used against them for things as basic as living together or for traveling in the same car.

Private prison operators are already cashing in on the Trump-era crackdown. The GEO Group announced Thursday it has secured a contract with the government to build a new 1000 bed, $110 million immigration prison in Conroe, Texas – just north of Houston. The contract comes as the GEO Group faces a class-action lawsuit in Colorado, where at least 60,000 immigrants accuse the for-profit detention company of forcing them to work for little or no pay under threat of solitary confinement. Hannah Leigh Myers reports.

The ICE Detention Center in Aurora, Colorado – also called the Denver Contract Detention Facility – is painted a bright blue. It looks very new, not at all like lot of the older government-run facilities. One would assume such a large, kempt looking institution would employ a large staff to keep it so well-maintained. But as it turns out, the detainees themselves may be a non-consenting work crew forced to keep this place spic and span.

In March, a federal judge approved class-action status for a lawsuit alleging at least 60,000 past and present detainees held at the Aurora ICE facility were forced to do janitorial work, clerical work, landscaping and other jobs for free or $1 a day.

Those who refuse are threatened with solitary confinement. A threat immigrants like this former, anonymous detainee say carries a lot of weight: “It was like hell on earth. If you’re not strong enough you’ll want to die in there.”

It’s the first class-action lawsuit in U.S. history obligating a private prison to fight claims of forced labor in court.

The Aurora facility is one of more than 140 detention centers operated by GEO Group, the second largest private prison operator, incarcerating more immigrants than any other company worldwide.

In a statement GEO Group says they “strongly refute” the forced labor allegations, and “intend to continue to vigorously defend [the] company against the claims.” Since the case was filed in 2014, GEO Group has insisted their so-called volunteer work program policies are set by the federal government but judges aren’t convinced.

“GEO filed a motion like that in this case and the judge said no, if you are in fact doing all the things alleged in the complaint that could violate the Trafficking Victims Protection Act prohibition on forced labor,” explains Nina DiSalvo, Executive Director of Towards Justice and one of the attorneys behind the lawsuit. She says the case’s new class-action status gives a frightened and marginalized community the power to fight such a powerful organization.

“These are practices that GEO has engaged in for a very long time, but they have yet to be challenged in the courts which I think speaks mostly to the difficulties that vulnerable populations have accessing the courts in the absence of the class-action mechanism,” DiSalvo points out.

The lawsuit claims GEO Group is unlawfully boosting profits by forcing detainees to do work for which they would otherwise have to hire employees.

Since President Trump took office, GEO stock has risen 98 percent. Just weeks after Attorney General Jeff Sessions was sworn in, he reversed plans to phase out federal use of private prisons. And this week, during a border visit in Arizona, Sessions announced plans to hire 125 more immigration judges as part of the administration’s commitment to increased immigration enforcement.

“For those that continue to seek improper and illegal entry into this country, be forewarned: This is a new era. This is the Trump era,” Sessions said. “The lawlessness, the abdication of duty to enforce our laws, and the catch and release policies of the past are over.”

There’s been a lot of activity outside the Aurora ICE facility. Considering the Trump administration’s plan to ramp up ICE detentions, this location is only expected to get bigger and busier. The facility can hold as many as 900 immigrants a day and they say the plan is to increase capacity here, to hold as many as 1,400 detainees at a time.

DiSalvo says the planned increase in immigrant detentions is all the more reason why this lawsuit is more important than ever.

“The new administration, at the federal level is interested in more aggressively deporting undocumented immigrants in this country that will require more and more people to be detained. Which I think just adds urgency to our case,” explains DiSalvo.

For years, the public has regularly protested outside the Aurora ICE facility and many others nationwide, decrying the unjust treatment of immigrants jailed within.

This week, more than 750 immigrants held in another GEO Group detention center – this one in Washington state – went on hunger strike. Some also called for a work stoppage. Like the Aurora facility, detainees at the Northwest Detention Center are also forced to work for $1 a day.

For the plaintiffs in the Aurora forced labor lawsuit, the class action certification is clearly a legal leap forward. But the case is likely to drag through the courts for years, and most of the detainees bringing the case may never see their day in court.

Yet immigrants and their advocates are hopeful that protests and legal actions will prove to be powerful weapons in the fight against the Trump administration’s policies that are leaning increasingly toward mass deportations.