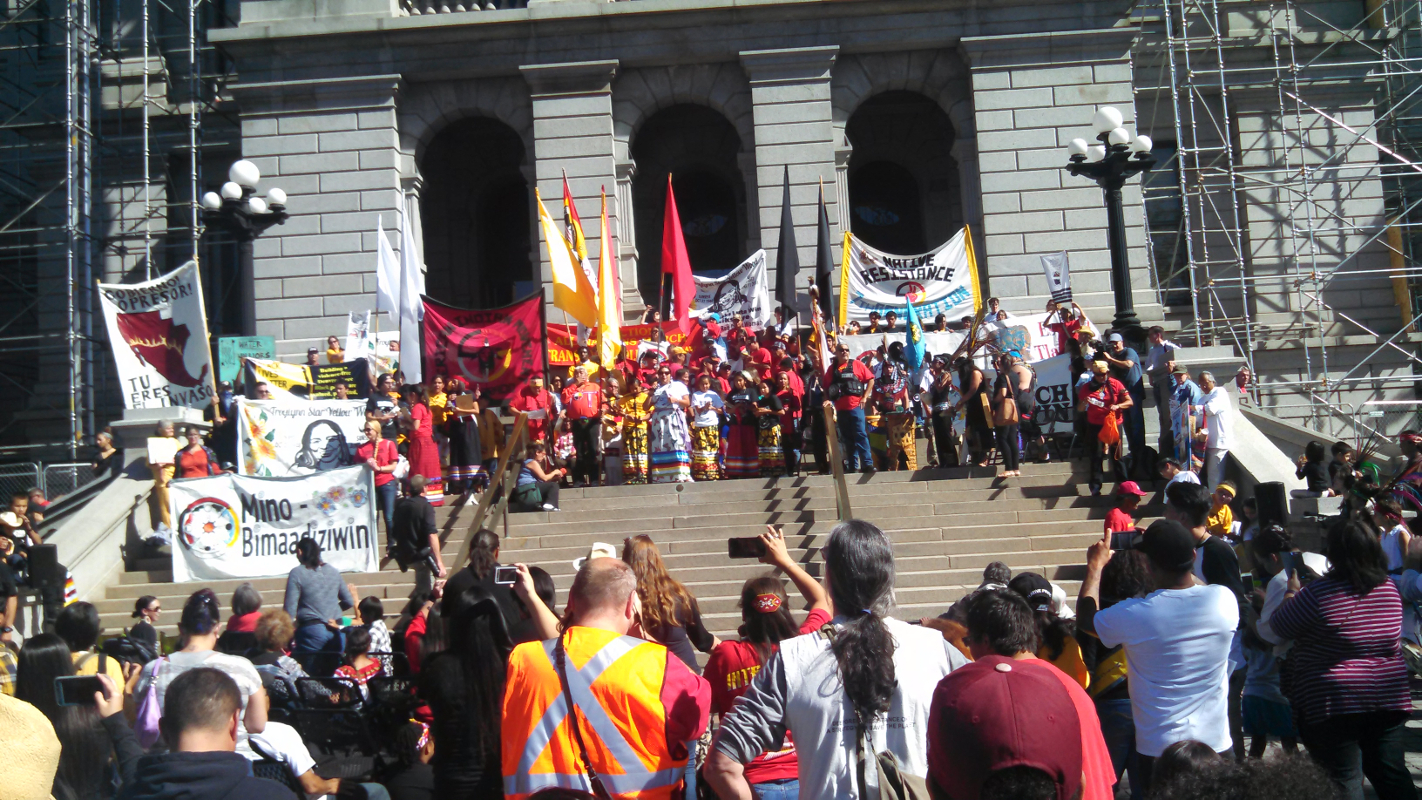 Denver, Colorado today joins a short list of cities that are opting to celebrate Indigenous People’s Day instead of Columbus Day. The change comes after years of protest by Native American tribes and their allies who opposed the glorification of Christopher Columbus due to the harms he inflicted on native peoples and the process of colonization that followed his so-called ‘discovery’ of the Americas. FSRN’s Hannah Leigh Myers reports from the inaugural Indigenous People’s Day in Denver.

In 1907, Colorado became the first state in the nation to make Columbus Day an official holiday, more than 30 years before the declaration of the national holiday. But now – after years of protests led by Native Americans highlighting Columbus’s killing, removal and enslavement of native people – Colorado’s capital is celebrating Indigenous People’s Day instead.

“It’s been a long struggle, a long haul, but freedom is in our DNA. Let me tell these takojas, our grandchildren here, that in a decade there will be no Columbus Day,” said Phyllis Young, longtime activist for native rights and member of the Standing Rock Sioux Nation.

She took a break from the Dakota Access Pipeline protests to travel to Colorado over the weekend to celebrate Indigenous People’s Day with members of the 48 tribes that reside in the state.

“America was founded on an indentured spirit, on slavery, on bondage, conformity. The Seven Council Fires predate the treaties, the agreements. They predate America,” Young noted. “We are the predecessors sovereign of the Western Hemisphere and nobody will take that away from us.”

Young was speaking from the steps of the Colorado state capital to a crowd of around 500 people who had gathered for Denver’s first official Indigenous People’s Day. At the same event, Tessa McLean of the Ojibwe tribe and member of Colorado’s American Indian Movement, traced the colonization process to ongoing violence and disregard faced by its survivors.

“Since 1492 our women have been either murdered, raped, desecrated. They’ve disappeared and I would like to blame Columbus for that,” McLean says. “You know, my cousin was murdered and there is someone behind bars for her death, but really I blame colonization.”

Denver is one of around 20 cities nationwide trading in their celebrations of Christopher Columbus in honor of the hemisphere’s original residents. Other cities doing the same include Boulder, Phoenix, Seattle and Minneapolis.

Earlier this year, Colorado Representative Joe Salazar introduced a bill that would have repealed Columbus Day at the state level. The bill ultimately failed, but Salazar says it didn’t dampen his resolve to end Colorado’s celebration of Columbus.

“We don’t honor anyone who commits genocide, who has engaged in acts of genocide and who promoted a doctrine of discovery which even to 2016 is still involved in genocidal acts against indigenous people,” Salazar says. “We always have known that when it comes to issues of communities of color it’s always a marathon, not a sprint and I knew I was going to have to bring it back again this coming year.”

Colorado has recently taken steps to amend for acts committed during the westward expansion of the United States. In 2014, Colorado’s governor publicly apologized to the descendants of the survivors of the Sand Creek massacre.

Members of the American Indian Movement, like Walter Lee Albo Hawkins, say they’re pleased to see the revision in the historical narrative about the colonization of the United States, but that actions speak louder than words.

“To apologize to a nation of people for the wrongdoing and then to turn around and still continue with different policies that are going to allow pipelines to go through or to allow water to be polluted, they’re empty promises,” Hawkins says.

The Dakota Access Pipeline came up multiple times at Saturday’s rally. Keynote speaker Phyllis Young of the Standing Rock Sioux Nation says she sees the same pan-tribal sense of community and purpose in the indigenous demonstrators in Denver.

“We have begun a new community because we have 9,000 people have come to our homeland. We have started a new community,” Young says. “It is a green community. We are not the Green Party. We are the green keepers of Mother Earth.”

Young told the crowd that pipeline opponents in North Dakota are getting ready for the next stage of the fight against encroachment by the oil and gas interests. This includes not only preparing the protest encampment for winter, but also the development and use of sustainable energy alternatives.

“We are developing, with the scientists, technology that will be green, that will accommodate our communities, and we will have something to offer to the entire world,” Young explains. “And if America wants to come with us, come with us, because you are welcome.”

For many, that invitation implies taking additional steps towards decolonization. And it means healing centuries-deep wounds with more than commemorations and apologies.