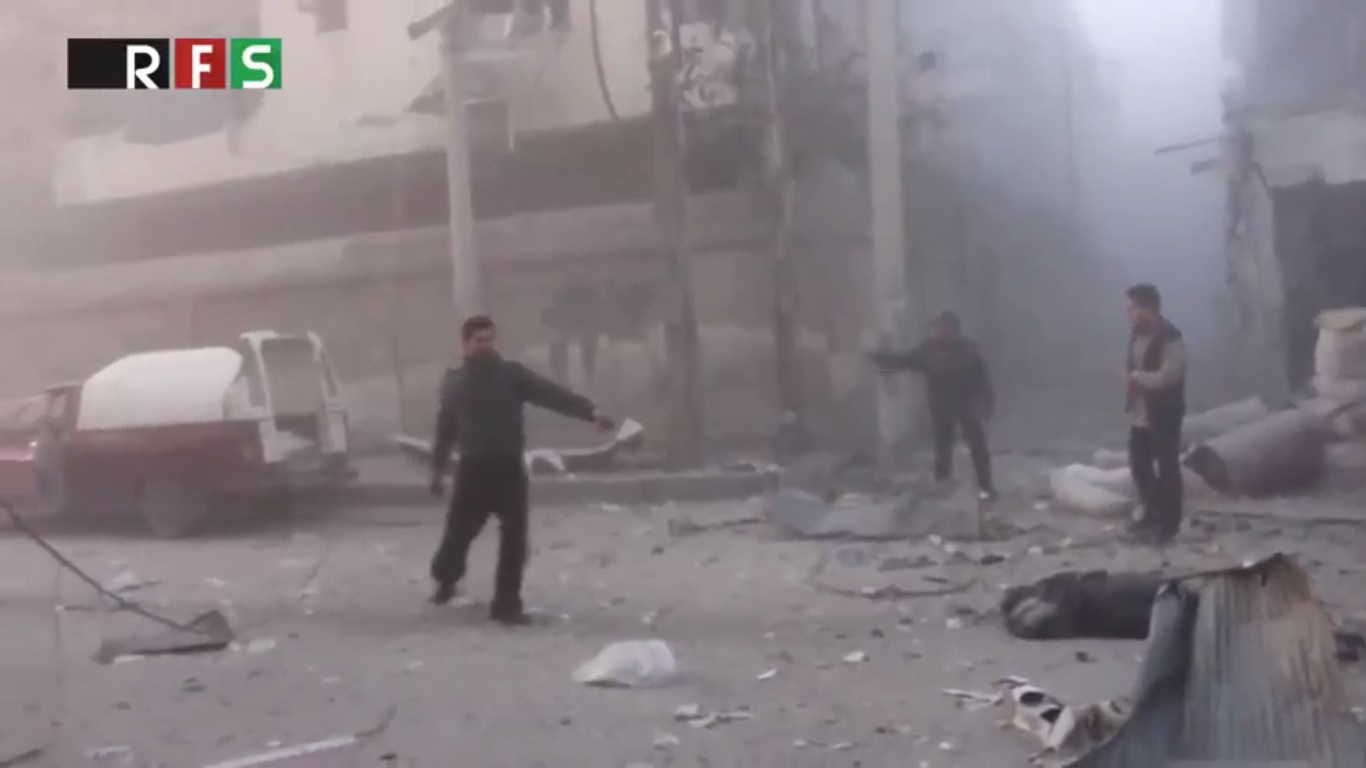 Multiple reports are emerging of what could be the deadliest chemical weapons attack of the ongoing Syrian Civil War. This as regime airstrikes pound rebel-held areas near Damascus with missiles. Shannon Young has more.

Eyewitnesses and foreign-based entities that monitor the Syrian Civil War are reporting mass casualties in a series of strikes in multiple rebel-held areas of Syria. Graphic video purportedly from the Damascus suburb of East Ghouta shows the aftermath of one of dozens of airstrikes that have hammered the area since Monday, reducing buildings to rubble and leaving charred bodies on the streets.

And in the country’s northwest Idlib Province, four on-the-ground sources told the online news site Syria Direct that missiles carrying a poison gas payload hit the area around 6:30am local time Tuesday morning. By afternoon, the province’s top healthcare official confirmed his agency had documented more than 50 deaths and 300 injures. While difficult to verify reports from the war- torn country, multiple sources say many of the dead are children whose developing respiratory systems are more vulnerable to chemical attacks. Some reports put the death toll at over 100, which would make it one the deadliest attacks involving chemical weapons in the six-year-long civil war. It comes on the heels of an attack Monday that used what witness suspect was chlorine gas.

Stéphane Dujarric, Spokesman for the United Nations Secretary-General said the Organization for the Prohibition of Chemical Weapons, or OPCW, is looking into the matter.

When pressed by a reporter if the alleged gas attacks would trigger an emergency meeting of the Security Council, the UN spokesperson replied, “I think you should check with the American presidency – they would let you know.”

President Trump issued a written statement, that read, “Today’s chemical attack in Syria against innocent people, including women and children, is reprehensible and cannot be ignored by the civilized world.”

Trump also blamed his predecessor, noting that after issuing a so called ‘red-line’ with respect to chemical attacks, President Obama failed to take action following a 2013 sarin attack that reportedly killed hundreds.

But that condemnation did not seem to temper the Trump Administration’s basic posture towards the Bashar al-Assad regime and its Russian allies. On Friday, before the start of the recent wave of chemical and conventional airstrikes targeting rebel-held areas, reporters pressed White House spokesperson Sean Spicer to lay out the administration’s position.

For its part, the U.S. State Department has offered no comment on the reports of recent attacks. Secretary of State Rex Tillerson ignored a direct question posed to him Tuesday during a photo op with King Abdullah II of Jordan.

Foreign policy reporters can no longer turn to the State Department’s press briefings for official comments and reactions. Those press briefings were abruptly halted last month and have been discontinued until further notice.

Meanwhile, the prospects of U.S. resettlement for those fleeing Syria for safety continue to narrow with President Trump vowing to double down on finding a way to bar Syrian refugees, despite judicial checks on his power.