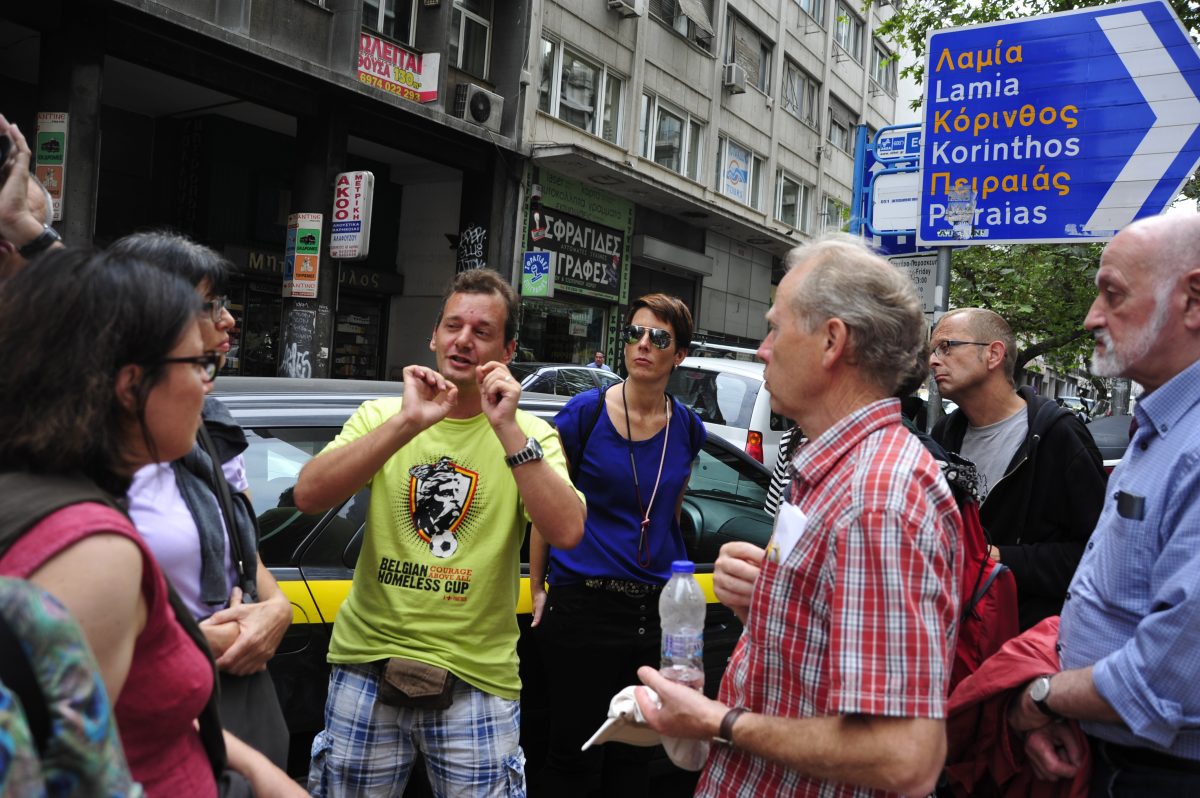 One of the homelessness tours starting at Skedia in Greece. (Photo credit: Heidi Fuller-Love)

Despite three bailouts to the cumulative tune of $370 billion since 2010, Greece’s economic landscape is a desert, with little hope of an end to austerity on the horizon. As the economic crisis bites deep in the capital, countless Greeks, unable to pay their debts, are being forced to sleep out on the streets. For refugees, too, the situation is worsening with the recent news that Greek authorities are cracking down on the temporary squats where many of them are housed. One social enterprise is funding aid by offering tours to meet the city’s homeless. Reporter Heidi Fuller-Love takes the tour.

In a stuffy office in Athens’ downtrodden Metaxourghio district, ex-journalist Chris Alefantis, who began volunteering with Skedia after losing his job, is introducing a new project that allows the city’s homeless to earn money.

“It’s a social tour. We’re not going to take you to the Acropolis. It starts from Skedia and we take this social walk from Omonia Square, where there are many social institutions. We make a few stops, quite discreetly, outside of social institutions, homeless shelters, soup kitchens and social delis that give food to people,” Alefantis explains. “We make these stops, we share information about the services they provide, the struggles they are faced with and how they try to cope.”

While no longer grabbing international headlines, the birthplace of democracy is still deeply mired in the economic crisis, which began in 2010 when Greece took a bailout of 110 billion euros. Youth unemployment has surpassed 60 percent while homelessness has increased 25 percent, although officials suggest that figures are probably higher if you include the refugees who are currently flooding into the country.

“Ninety-nine percent of Skedia vendors are direct victims of the current social and financial crisis, and they are desperate to earn some money in a dignified way, and of course they’re desperate to get back into the workforce,” says Alefantis.

Presentation over, the tour begins with Giannis, a thirty-something guide, who lived in a car for six months before joining Skedia.

The streets of the Metaxourghio neighborhood – once a fairly comfortable working class district of the Greek capital – are now dominated by homeless people and drug addicts.

Giannis notes that, apart from a short lived, housing program funded by a private foundation, very little is done to help the homeless in Greece.

“The hotel that you see behind me – Hotel Ioannis – is a hotel that the municipality of Athens turned into a shelter for homeless people,” Giannis points out. “It has 140 people capacity. It’s full now. There are people who live three four years or five in the shelter.”

A local soup kitchen struggles to keep up with demand. The prospect of a warm meal draws long lines and homeless clients chat to pass the time.

Many people here do not fit the stereotype. They are former professionals whose lives have been upended by financial crisis. Maria, a 40-year-old secretary, has lived in the streets for three years and collects rainwater to drink; Fifty-eight-year-old Giorgos, once owned a own travel company but now lives in a doorway.

And then there’s Lambros: “I was alone on my first night as a homeless person and I started thinking: What happened for me to reach this point? How could someone who, as a child, had a good life, a job, reach the age of 50 and have nothing?” Lambros laments. “I don’t wish this on anyone.”

A few blocks further down, stands the remains of a luxury hotel, which closed in 2011. The walls are black with graffiti and the marble steps are littered with glass pipes. Giannis says they’re used to smoke a drug called Shisha.

“This drug is very dangerous because of the ingredients. The base is crystal meth, but the ingredients it have in side are fluids of battery and chlor. When they use it, this drug is like a small rock, a small stone,” Giannis explains. “They put it in the pipe and they burn it and they smoke it.”

Before launching the tour project, Chris Alefantis grappled with the ethics of taking tourists to areas hard hit by homelessness. Tour participants are given strict instructions to respect the privacy and space of street dwellers and to seek consent for interactions. And the guides, who have all experienced homelessness themselves, are sensitive in handling the dynamics.

“When I look at Skedia vendors I see myself, my family members, my friends. You know, this is the people. And I guess this is one of the reasons why, so far, Skedia has such a big impact on society,” Alefantis says. “Because people have embraced Skedia exactly because they identify with the vendors.”

Organisations like Skedia, Emfasis, Boroume and others are doing their best to cope with the problem caused by the enormous wave of layoffs that started after Greece’s first bailout in 2010. But with unemployment rocketing, increasing numbers of refugees out on the streets and the recent crackdown on the squatted hotels that are one of the few alternatives available to living out on the streets in Athens, the situation for the city’s homeless looks set to get much worse.