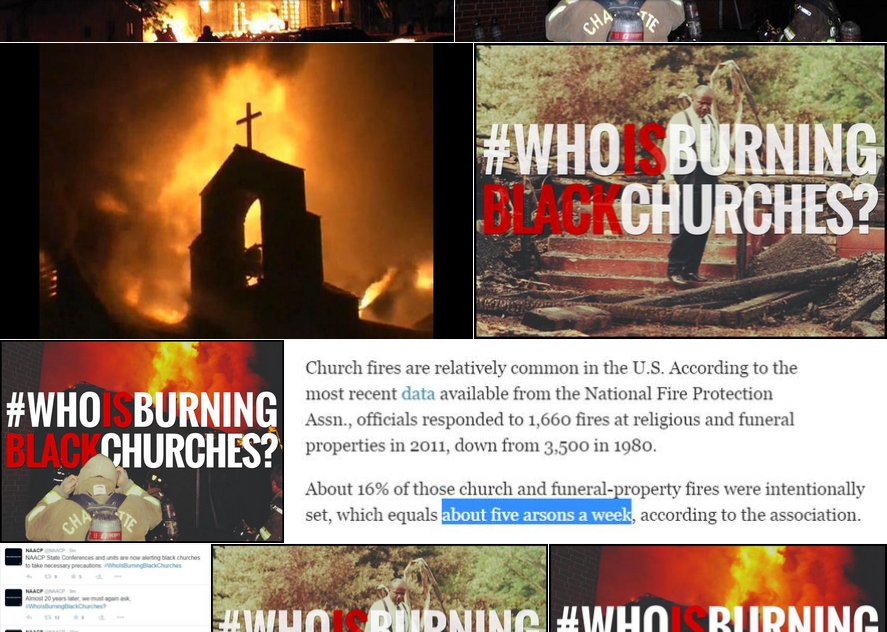 At least seven predominately black churches in the South have burned in the weeks following the deadly attack on the Emanuel AME church in Charleston, South Carolina. Preliminary investigations have ruled some of the fires arson, while others are ostensibly accidental or related to electrical failures. Either way, the fires have many online asking #WhoIsBurningBlackChurches. Lena Nozizwe has more.

The first in a recent series of fires at black churches in the South occurred on June 21st at the College Hill Seventh Day Adventist Church in Knoxville, Tennessee.

Senior Pastor Cleveland Hobdy III says at first he did not believe the fire was racially motivated, “but then you have this thread of fires immediately following and all within a 300 mile radius of the South coupled with the historic nature of violence of African American churches in the South, you have to keep the possibility on the back burner, you have to keep it on the stove.”

Knoxville Fire Department spokesman Captain D.J. Corcoran says the fire at the Seventh Day Adventist Church was definitely arson. However, he says investigators do not believe it was a hate crime.

“The people did not come with that intent,” according to Captain Corcoran. “All the items were on hand it was more of vandalism or arson than a hate crime. Someone just stumbled upon the scene. It looked more like juveniles.”

A manifesto attributed to 21-year-old Roof states he decided to kill in Charleston because of the high numbers of black residents and because there was no, “KKK to help.”

Dr. Delores Jones-Brown is a Professor in the Department of Law, Police Science and Criminal Justice Administration at John Jay College of Criminal Justice in New York. She says she sees a pattern.

“We are once again at an ugly overt racial unrest,” says Jones-Brown. “It seems to me that there is no coincidence. The black church has always been a place for black people to organize. It is not coincide that black churches are a place of white terror.”

Jones-Brown, who is also a former prosecutor, thinks the investigations should include independent oversight bodies like non-profit organizations such as the NAACP or the ACLU.

“We know that governance has worked with groups in the past and to get a stamp of objectively it would be important to have the balance of a non-governmental agency,” she adds.

Fires in black churches can be traced back to the days of slavery when services were often held in private. The Emmanuel AME Church in Charleston was itself burned down in June, 1822 in an effort to quash a slave rebellion. Another wave of attacks hit Black churches in the South during the Civil Rights era and then again in the mid 1990s.

In 1996, then-President Bill Clinton quoted Dr. Martin Luther King when he spoke at Mount Zion church in Greeleyville, South Carolina after the church rebounded and rebuilt after a fire was set there by the KKK.

“As Dr. Martin Luther King said self-centered men have torn down what others-centered men can build up,” Clinton said.

The church was on fire again last week, but reports claim the cause was lightning.

Back in Knoxville, Pastor Hodby says his church will rebuild too, even though insurance will not cover all the losses. And, he says the church will also have to invest in more security.