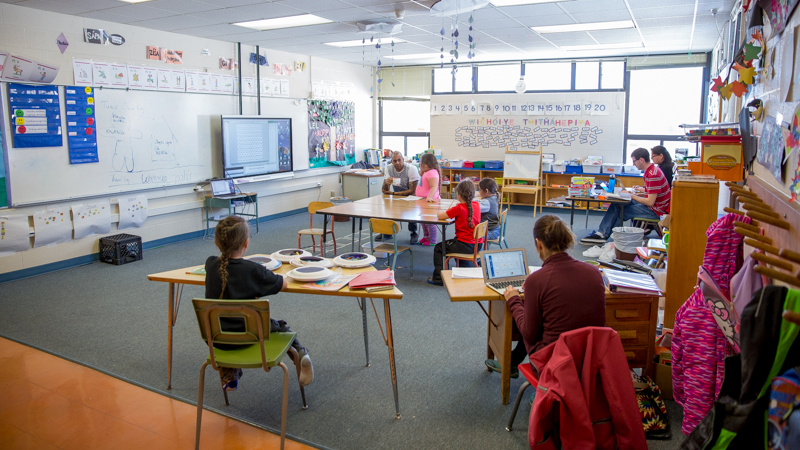 A Catholic school on the Pine Ridge Reservation in South Dakota has introduced its first Lakota language immersion program. The small kindergarten class is the start of a revolving door immersion concept that will see students remain in a culturally-rich environment through the 4th grade.

Jim Kent visited the Red Cloud Indian School to talk with the Lakota language teacher and her young students about the importance of retaining a language in order to preserve a culture.

The Red Cloud Indian School is nestled within the rolling hills of Western South Dakota and lies just a few miles north of the village of Pine Ridge.

Founded in 1888 as the Holy Rosary Mission, its bucolic setting belies a history that saw Lakota children spend half their day taking classes while spending the other half performing domestic duties, such as kitchen work and farming, to keep the mission operating.

While Catholicism flourished in the early part of the 20th century, many Lakota families chose to send their children to Holy Rosary instead of the federal government’s boarding schools.

But no matter which institutions they were a part of, the process of assimilating Native children into the dominant non-Native society resulted in a loss of their language.

Savannah Greseth is one of the teachers at the Red Cloud Indian School’s Lakota Kindergarten Immersion Class. She says although her students have attended a daycare immersion program starting as young as 18 months-old, most come from an environment where Lakota isn’t spoken.

“When they come over to the daycare, most of them do not come from Lakota speaking families. So the children that are here now, a lot of the parents are learning alongside the children with classes that our program offers,” Greseth says. “We do have one little boy, his grandparents are fluent speakers, but…”

But that little boy is the exception. And though the Lakota Immersion class only has five students, the ratio for non-speaking tribal members is much higher than reflected by these numbers. In a population of some 40,000 on the Pine Ridge Reservation, it’s estimated that there are only about 6,000 fluent Lakota speakers.

As a result, this immersion kindergarten class, like the day care school the students have already attended, concentrates on speaking all-Lakota all-the-time.

The results are most readily seen when children from the immersion class associate with their non-Lakota speaking counterparts at Red Cloud, says Greseth: “So, it’s really interesting being here because we do a lot of the same activities with them. So we’ll go to gym with them. We’ll go to arts, library, different things. And so we’ll be with that other classroom. But as teachers we don’t, we don’t break our Lakota with our kids. And it’s interesting because the other children, they really intently listen, they’re like ‘well, I know what that means too’ and they get excited.”

And though Greseth makes a point to use words from the children’s culture and even their home life when instructing them in subjects like basic math, changing times have brought challenges to her job.

“Like robots. We had a book about robots – ‘máza wičháša,’” Greseth recalls. “And, so, the kids get really excited because they’re familiar with the subject, but it’s also interesting because the fluent speakers will say, ‘Well, what’s a good way of describing this.’”

That’s when the Lakota linguistics expert will meet with the natural Native speaker to come up with a new word for a centuries old language.

Of course, teaching Lakota isn’t just about a traditional language keeping pace with the modern world. It’s about the Lakota culture’s survival into the new millennium since the culture and the language are inexorably linked. Red Cloud executive vice-president Robert Brave Heart, Sr. explains.

To that end, the 5- and 6-year-old students in the Red Cloud immersion kindergarten class are taught the traditional way to introduce themselves in Lakota.

“My name is. And my mom and my dad, and my sister and my brother,” the student answers.

Perhaps the most telling aspect of the immersion school’s effects was the unwillingness or inability for the young students to easily shift back to speaking in English when I asked them to translate what they’d said in Lakota.

But that’s a good problem to have, observes Robert Brave Heart Sr., considering the history of Native American children in boarding schools being punished for speaking their traditional languages.