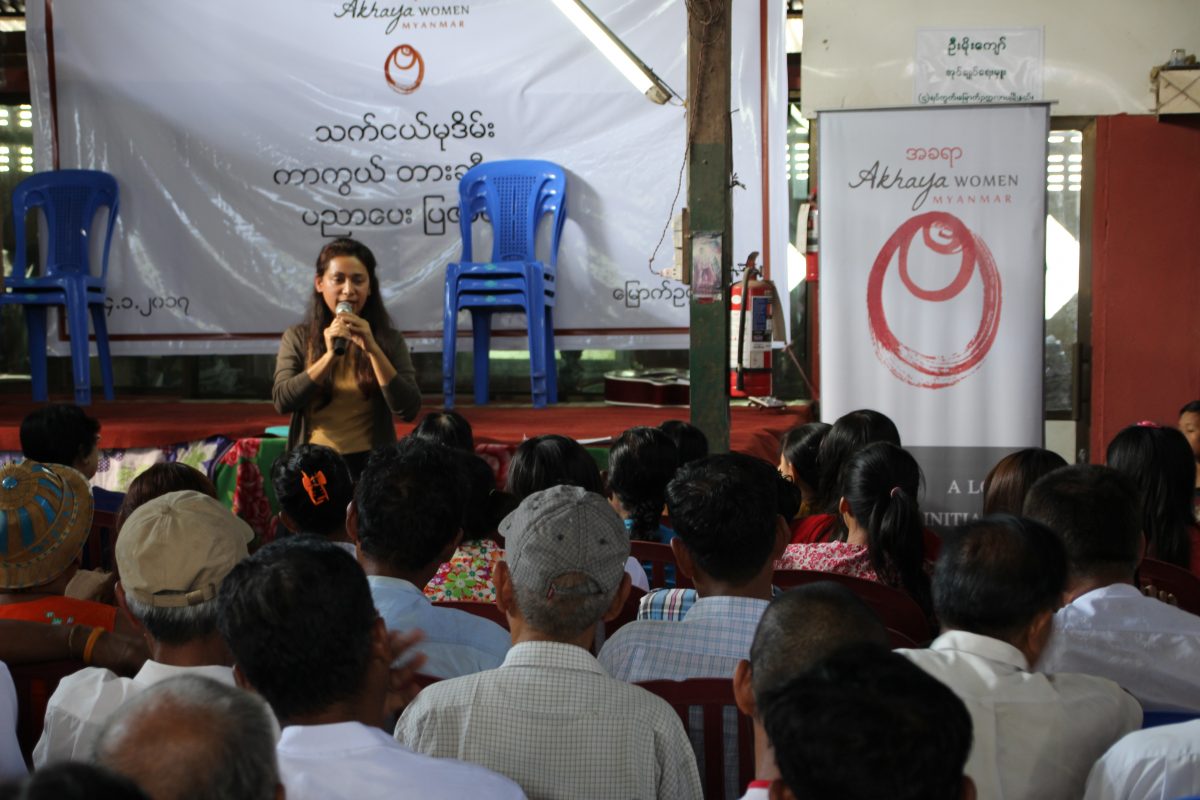 A year ago, citizens of Myanmar – also referred to as Burma – saw their first civilian president take office in a government led by pro-democracy icon Aung Sang Suu Kyi. This major step toward a representative government came after more than half a century of brutal military rule. While for decades, any talk of human rights was banned, the country is now seeing hundreds of civil society organizations mushroom – but human rights advocates say not everyone is benefiting from the new freedoms in the country also known as Burma. FSRN’s Lena Odgaard reports.

In North Okkalapa, a suburb of Yangon, people are gathering in a large tin shack. Music is blasting from two speakers.

It’s the theme song of Akhaya, a local women’s organization that works to promote equality and rights for women throughout Myanmar. Today the organization is hosting a play that aims to shed light on sexual assault on minors.

In the play a young girl is raped by an ice cream salesman. The story is based on an attack that took place in the area a few years ago.

Papa Nan Htwe, program coordinator of the awareness theater, estimates that only about one in three rape cases are reported – and in half of the cases the girl is under 16.

“We believe three in one of survivors are reported to the police,” Nan Htwe says.

Nan Htwe explains that in much of Myanmar, the social construct around rape and even domestic abuse does not view these assaults as violence – and most people – both men and women – don’t consider sexual assault and domestic abuse violations of women’s rights.

She illustrated her point after the play, by asking if anyone in the audience knew of cases of violence against women and girls: “‘Is there any violence in this village?’ They said no. Do husbands beat their wives – yes. They don’t know what is violence.”

For 50 years, while Myanmar was ruled by an oppressive military junta, any call for human rights could lead to years in prison. This started to change in 2011 when the military government introduced a series of reforms that enabled activists and civil society groups to form and work openly. Hundreds of new organizations sprung up. At the same time, restrictions on access to information were eased and in less than five years, internet penetration has gone from less than 1 percent to 20 percent.

A year ago, after a landslide electoral victory, the National League for Democracy, the so-called NLD, took office. Led by the internationally praised Nobel Peace laureate, Aung San Suu Kyi, the victory was hailed as the official beginning of a new democratic era for Myanmar.

In another Yangon suburb, LGBT rights activist Tin Ko Ko works at an office promoting awareness about HIV and AIDS. During the lead up to the landmark election, Tin Ko Ko and his community campaigned to get the NLD elected. They expected that the new government would cancel some of Myanmar’s repressive laws targeting the LGBT community.

While they can now talk openly about homosexuality, they are still waiting for meaningful legislative reforms.

“For us, it means we can work more freely and it’s easier to cooperate with other organizations,” Ko Ko explains. “But homosexuality is still not widely accepted, and even the new government and high level officials say that many issues are more important than LGBT rights.”

Officially, engaging in homosexual acts is illegal in Myanmar according to an old law dating back to British colonial times. It is rarely enforced, but according to Ko Ko police officers and authorities use it as an excuse to harass, blackmail and abuse members of the LGBT community.

“We hoped for and expected more rights with this new government,” Ko Ko says. “We worked actively to get them elected and voted for them ourselves. But we are not satisfied.”

And 12 months later, activists like Ko Ko are starting to wonder how long they must wait to see noteworthy changes in policies and laws.

Thet Swe Win plays with his four-year-old daughter. He has been a human rights activist since 2007 and was a staunch supporter of the NLD.

“We voted for this government because we believed they could bring change for the country, we believed that they were the government of the people,” Swe Win says. “But, it has been one year and there has not really been tangible change that we can see yet. Many are starting getting doubt.”

Echoing a number of international human rights organizations, Swe Win criticizes the government and especially Suu Kyi, locally referred to as ‘the Lady’, for continuing the oppression of minorities, especially the Muslim Rohingyas.

“They don’t really listen to the people,” says Swe Win. “They say they work for the people but, in reality, ‘The Lady’, she keeps quiet for the issues of Rohingya.”

In April, Myanmar will host a small bi-election. Swe Win predicts another landslide victory for NLD – mainly because there is no real opposition. He fears the party’s huge support will make them even more reluctant to move forward with democratic reforms, and that Myanmar’s new democracy is not truly a democracy for all its people.