Families in Mexico launch their own searches for missing loved ones 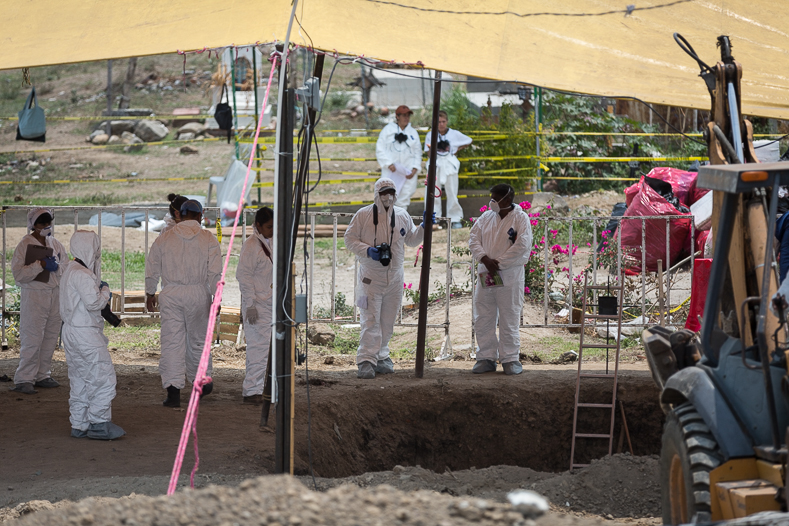 In Mexico, families of the disappeared have been leading efforts to uncover mass graves. More than 300 bodies have been unearthed in recent weeks, and along with the bodies come hints at the answers thousands of families have been seeking since loved ones went missing in the decade of militarized drug war. The graves also expose the tense relationship between the families of the victims and the authorities tasked with solving crimes. Clayton Conn reports from the Mexican capital.

A back-hoe churns up the loose soil of a clandestine grave in the rural Mexican town of Jojutla in the south-central state of Morelos. Thus far, 64 bodies have been found at the site, with signs that many more may still be buried beneath.

Jojutla is only one of the most recent clandestine grave sites uncovered by families of Mexico’s estimated 30,000 disappeared. Teresa Alvardo, who has been searching for her disappeared sister, Minerva, for the last 11 years, has participated in several of these exhumations. She says over the last decade little has changed in terms of the authorities’ attitude and participation.

“The authorities make it seem that they are communicating with each other and that they are searching, but that is not the reality,” Alvardo explains. “No one is searching for our disappeared, rather we the families are the ones doing the investigations and producing information.”

Meanwhile in the violence stricken, Gulf Coast state of Veracruz, a group of mothers have been digging for nine months at a site called Colinas de Santa Fe, considered to be the largest clandestine grave ever found in Mexico. These women have uncovered at least 250 corpses in a lot the size of two soccer fields.

Lucia Diaz, who has been searching for her disappeared son, Luis, and who is the spokeswoman of a group of Veracruz families searching for their missing relatives, laments the overall inaction by both state and federal authorities in recuperating the remains of the victims and investigating the crimes.

Although state authorities in both Veracruz and Morelos are now participating in the excavations of the graves, human rights defenders and the families speculate the sites may contain victims of forced disappearances and extrajudicial murders. If that’s the case, it means the chain of custody of evidence is in the hands of suspected perpetrators.

The families that begin searches based on tips often do so at great personal risk, but many mothers of missing share a common sentiment: that fear takes a back seat to the need for answers.

Diaz and the families in Veracruz have been warned by the authorities to stop their participation, and in one occasion unidentified men threatened them at gunpoint. Yet Diaz says the families are more compelled to provide justice to the victims than to buckle to threats.

Last month, Mexico’s president, Enrique Peña Nieto, acknowledged widespread irregularities when it comes to investigating disappearances and defending human rights in the country. Since the forced disappearance of the 43 Ayotzinapa students in 2014, the president has repeatedly pinned culpability on local level corruption and the infiltration of organized crime groups into municipal and state level authorities. Peña Nieto argues for stiffer laws and greater federal participation.

“Mexico requires strong institutions. Impunity hurts and violates society; it erodes our shared values and undermines peaceful coexistence among Mexicans,” Nieto says. “A country without strong laws and institutions, is a vulnerable country. It is a nation unprotected against crime and violence.”

But pointing fingers at state and local police requires overlooking stacks of evidence linking federal police and military figures to crimes like enforced disappearances and extrajudicial killings. The director of Mexico’s National Human Rights Commission, Raul Gonzalez, argued that impunity, complicity and human rights violations persist, even after Mexico passed a series of anti-corruption and security laws in the wake of the Ayotzinapa case.

“The lack of training, as well as the lack of confidence on the part of the competent authorities, has allowed for such grave practices as torture, enforced disappearances or arbitrary executions to continue. This results in access to truth and justice remaining a mere aspiration for many people.”

In a new report, the Human Rights Commission found conflicting numbers between the official and independent counts of clandestine graves unearthed. According to government numbers, 855 graves with the remains of 1,548 corpses have been uncovered since 2007. This number compares to the independent count of 1,143 graves with 3,230 bodies.

As more graves are unearthed, more families of victims turn out to participate, prompting a glimmer of optimism in finding the disappeared and procuring justice for mothers such as Diaz.

“It may be hopeless at the moment but we have to think ahead, because things need to change,” Diaz says. “Of course it’s not going to happen overnight, but it’s going to take us time and effort, and a lot of fighting with the authorities, but we need to make a change in Mexico, because for us it’s a matter of life and death.”

Mexico’s Congress is currently debating legislation that would clearly spell out forced disappearance as a crime, and provide greater resources to search for victims. At the same time lawmakers are also debating a bill to increase the policing powers of Mexico’s armed forces that have been denounced for human rights violations.