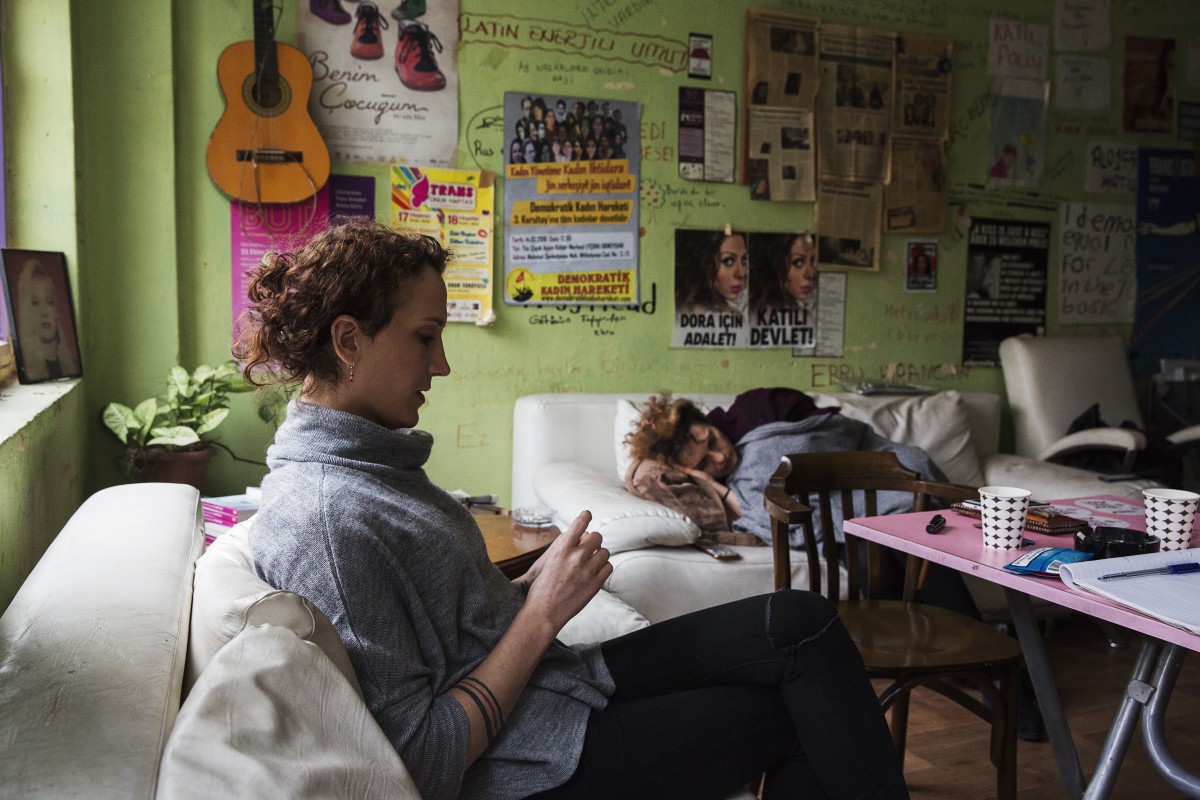 Turkey decriminalized homosexuality in 1858 and gives asylum to lesbian, gay, bisexual and transgender (LGBT) people from other countries escaping persecution, but its modern penal code continues to discriminate, giving lighter sentences to perpetrators who commit crimes against their community. Activists are fighting for constitutional protection and acceptance in a society that considers being gay or trans as taboo. Fariba Nawa reports from Istanbul.

The walls of the LGBT Solidarity Association in central Istanbul are bright green and filled with political graffiti. Board member Kıvılcım Arat sits in front of a pink table, rolling up a cigarette with her slender fingers tipped with bright red nails.

Arat says the struggle for LGBT people in Turkey has a long way to go but since the massive Taksim Square protests against the Turkish government’s overdevelopment and conservatism in 2013, other minorities and mainstream Turks have joined the fight for their rights. One of the main goals of LGBT activists is to have sexual orientation and gender identity recognized and protected in the Turkish constitution.

Arat outlines what this recognition and protection would entail: “The LGBT movement has five fundamental demands for rights. One of them is to include sexual orientation and gender identity terms to Article 10 of the constitution, which defines the equal treatment principle. The second one is to enact a law on hate crimes. This is very important because LGBTs in Turkey are exposed to hate crimes. They get killed in hate murders. The third one is to define sex work as a profession. The fourth one is to remove lighter sentences for perpetrators of hate crimes in the legal system. The fifth one is to open a safe environment for sex workers.”

Activists from different NGOs and groups took a bus to Ankara to voice their demands to the Turkish general assembly last year. The ruling conservative Justice and Development Party, or AKP, doesn’t support them, but two other political parties took on their cause and opened discussion in Parliament for a week. The finale was a blow. The AKP and another party killed the proposal.

Arat believes that is because, “the whole government is so masculine, it’s impossible for them to do something in favor of women or transgender or LGBTs.”

But LGBT individuals have made strides. Reforms in Turkish cities allowing for them to be out and expressive include the opening of many cafes.

The Chaplain Café flies its rainbow flag over its balcony in historic central Istanbul. Posters of Charlie Chaplain adorn the walls and Turkish music blasts from the speakers. This is one of about a dozen cafes openly serving the LBGT community in the city. These cafes, which serve food and drinks, have popped up in the last decade as voices of the community have become stronger.

But that openness is limited to these few public spaces. Attitudes toward the LGBT community have become more accepting, but a deep homophobia lingers. Thirteen years ago, LGBT activists began an annual gay pride parade in Istanbul but last summer, police disbanded the parade with rubber bullets, water canons and tear gas because it was during the Islamic holy month of Ramadan. Many of Turkey’s Muslim population believe Islam forbids homosexuality.

A few blocks from the café where the parade takes place in Taksim Square, street vendors sell sesame-covered bread, corn and roasted chestnuts.

These homophobic attitudes are the real problem, not Islam, says Suma, who fled Egypt to Turkey after he was attacked and his friend was killed for being gay in Cairo. A former businessman and current founder of Tea and Talk, an LGBT group for Arab refugees in Turkey, Suma is waiting for asylum to a third country where he can feel safe as an LGBT member. He says he’s one of about 560 LGBT refugees in Turkey and they all want to go to the West.

“Actually, people are staring in a very aggressive way,” explains Suma. “Nobody likes me to sit near to him in the bus as if I’m a plague. Some people when they look at me, they move away from me. They’re afraid of being infected. One time a very young man was very aggressive to me in the subway. And he tried to beat me. That’s why I step off the subway…and the people were laughing in the car.”

But Suma isn’t deterred. He tries to help his community through Tea and Talk. Just last week, with his organization’s help, a judge ordered police to investigate who assaulted a LGBT refugee man by viewing the street security camera where the incident occurred. The judge told the victim he could sue police for refusing to file a report.

Today, Suma is in an LGBT café and anxious because he received a call and photo text from two Arab lesbians who said they were beaten in Ankara, four hours from Istanbul. The attackers went free but the police targeted the lesbians.

“The police arrested them and they wear handcuffs,” says Suma. “They were beaten and you can tell they are beaten. And later on, the police screamed to their faces: ‘You should go home. Don’t make any problems. You are troublemakers.’”

Police eventually released the women to receive treatment at the hospital.

Suma makes calls to a representative of the United Nations High Commissioner for Refugees. The representative makes sure a police report is filed and the women’s asylum case is expedited.

Suma breathes a sigh of relief.

Whether a refugee or native LGBT person, it’s a daily battle to be out in Turkey. Despite the hard work of activists, legal protection for the community in the country’s constitution will not become reality anytime soon.