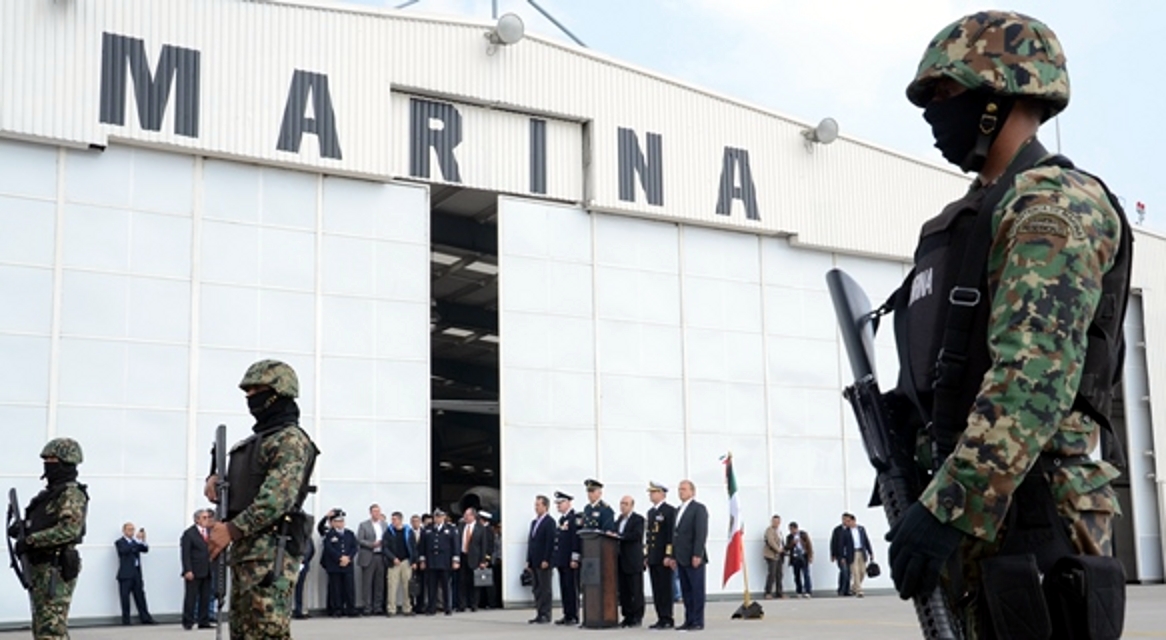 Official photo from the press conference announcing the capture of Joaquín "El Chapo" Guzmán in February of 2014.

High-ranking officials in the U.S. and in Mexico have celebrated Saturday’s arrest of Sinaloa Cartel leader, Joaquín “El Chapo” Guzmán.The man whose nickname means “Shorty” in English is possibly the most powerful drug trafficker in the world. But the celebratory tone seen in official statements about the arrest isn’t evident in Mexico’s streets or among social media users. Years of arrests of cartel leaders haven’t stopped the drug war violence which has killed at least 70,000 Mexicans since December 2006.

Two border cities in particular may have to worry about increases in violence if Guzmán’s arrest destabilizes the Sinaloa Cartel’s control of drug trafficking operations there. Those cities are Tijuana and Ciudad Juárez. Both became turf battlegrounds in 2007 and 2008 respectively when the Sinaloa Cartel decided to move into territories long controlled by local cartels. The resulting militarization of both cities, ostensibly to control the conflict and protect civilians, resulted in even more bloodshed and human rights violations.

In the case of Tijuana, the turf war violence began after the arrests of two leading figures from the city’s Arellano Félix cartel. The arrests apparently destabilized the organization enough to encourage the Sinaloa cartel to make a move for the territory in a time of perceived weakness. The government of then-president Felipe Calderón then sent in the military to participate in policing duties. Many of the reports of abuses against the military stem from the fact that rank-and-file soldiers are trained for combat, not civilian policing or investigative work.

This story, filed from Tijuana on February 25, 2008, is a snapshot of the human and civil rights in the border city at a time in which the Sinaloa cartel was in the midst of establishing its control over the important gateway into California’s drug market… and just after the militarization of the city’s policing operations:

As part of Mexican President Felipe Calderon´s “strong hand” approach to the war on drugs and rampant police corruption, the military presence in Mexican cities has been steadily rising – especially in Northern border cities.

In the last decade, under pressure from the US and other major drug-consuming countries, the Mexican government has viewed the military as a reliable entity.  But last year Calderón increased the military’s role even further, sending federal task forces to Ciudad Juárez, Monterrey, and Tijuana. These units have been compared to the American “Untouchables,” who pursued U.S. mobsters in the 1930s.

But as Mariana Martinez and Alonso Rivera report, civilians – even those who earlier called for a military presence – are now questioning this solution because of its effect on human and civil rights.

These power vacuums left by detained cartel leaders and the spikes in violence they can provoke aren’t immediately clear following the high-profile arrests. Rather, the increase in violence and militarization of policing occurs in a way that becomes evident over months. Time will tell if the Sinaloa cartel will retain its hegemony over drug trafficking in Tijuana and Ciudad Juárez with Guzmán in prison… or if the strategy of going after cartel leaders means more bloodshed for residents of these strategic border cities.