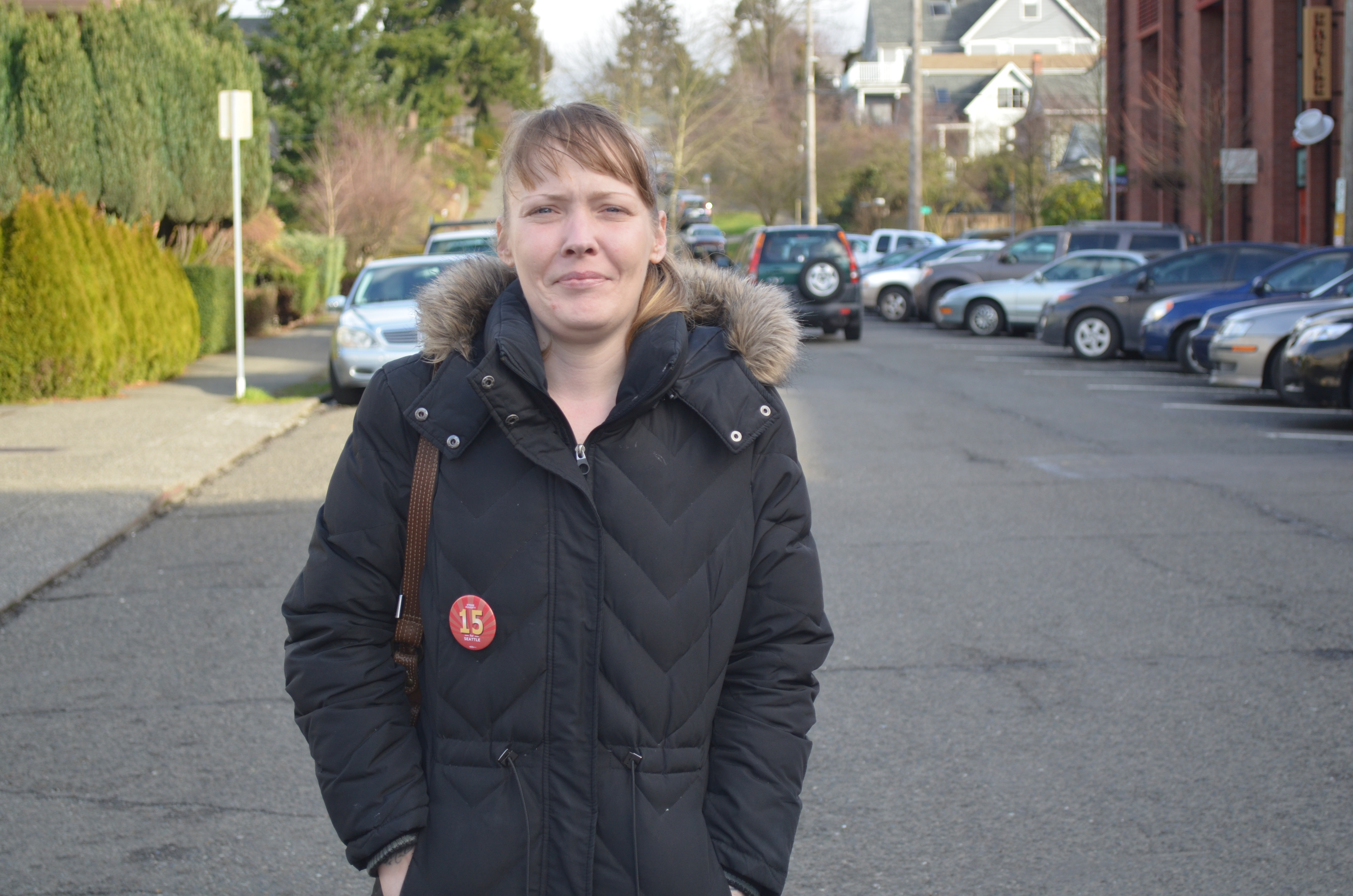 Low-paid workers across the country are agitating for higher wages, and President Obama took up the call in his State of the Union address when he stressed the need for a $10.10 federal minimum. In Seattle, workers are aiming even higher: They’re pushing for a fifteen-dollar minimum, and they’ve gained considerable traction. Eilís O’Neill reports.

Thirty-two-year-old Crystal Thompson lives in Columbia City, in South Seattle, where rents are lower than in the northern part of the city. She works at a local Domino’s, making $9.32 an hour. That’s Washington State’s minimum wage, which is the highest in the country—but it’s still not enough for Thompson to get by. She’s been a single mom for the past four years, ever since her partner, an undocumented immigrant, was deported when she called the police because of domestic violence. She says it’s not easy to raise her autistic seven-year-old son without support.

Thompson and her son get $260 in food stamps every month. They’re also on Medicaid, and the state pays her aunt $2.00 an hour to care for her son while she’s at work. She’s trying to get into a housing assistance program.

Around Seattle, workers aren’t making enough to get by, says Sage Wilson, an organizer and spokesperson for Working Washington, which is at the front lines of the fight for a $15 minimum. In November, Working Washington helped push a successful ballot initiative in the city of SeaTac. Now, the large corporations that benefit from the tourism business brought in by the SeaTac airport have to pay their employees at least $15 an hour.

“On December 5, we had a march from SeaTac to Seattle, which is a 13-mile march, ’cause, after SeaTac, Seattle’s the next stop,” says Wilson.

Twelve percent of Seattleites make under $25,000 a year—and that only counts those who still live in the city, not anyone who has been displaced. Wilson says wages aren’t keeping pace with rising rents in the city of Seattle, so many people who make minimum wage are extremely rent-burdened, or they share small apartments with four or five others, or they’ve had to leave the city entirely. That’s one of the reasons Seattle’s newly-elected Socialist Councilmember, Kshama Sawant, advocates on her website for raising the minimum to $15 an hour.

“$10.10 for the next two years, or $20,000 a year for those who are lucky to get a full-time job is not a ticket out of poverty for working families,” says Sawant. “Fast-food workers, Walmart workers, and others have gone on strike and built powerful protests in cities in every part of the country over the past year for $15 an hour.”

Seattle’s mayor, Ed Murray, has said he supports the idea of a $15 minimum and has appointed a committee to decide how best to implement it. He’s also issued an executive order to pay all city employees $15 an hour.

Marilyn Watkins, a policy director with the Seattle-based Economic Opportunity Institute, says studies reveal that raising the minimum wage about ten percent does not negatively impact businesses or employment and that wealthy cities with a high cost of living can sustain a high minimum wage. That said, she recommends that Seattle raise the minimum wage one dollar per year rather than from $9.32 to $15 all at once.

“There’s a recent analysis that’s been done on the city of San Francisco, where they have a higher minimum wage than the state of California,” says Watkins. “They have had a sick leave law in effect for all workers in the city. And they also require most employers to provide health insurance. So they have considerably higher standards for workplace policies than the rest of the state of California does. And the evidence is pretty clear that employers in San Francisco have been able to make those adjustments.”

“I think it’s legit to say that if one restaurant raised their wages 50% it would be a problem,” says Wilson. “But that’s not what we’re asking for. We’re asking for the floor to be raised for everyone. And that means not just that your costs go up but your volume and demand comes back and goes up. And people’s ability to pay goes up.”

Back in South Seattle, Crystal Thompson says she wishes she made just a little more money. If she did, she would not only be able to support her son better; she might also be able to go back to school to become a medical translator.

“First off, I would possibly be able to move out of a rough neighborhood and live in a neighborhood where my child can actually ride his bike outside and not have to worry about getting in between a drive-by or something,” she says. “And then hopefully a car, transportation and things. Maybe a car and going back to school.”

The Washington State legislature is considering raising the minimum wage to $12 an hour by 2016, while the U.S. Congress is looking at raising the federal minimum to $10.10. This week, President Obama signed an executive order requiring that federal contractors pay employees at least $10.10 an hour. In his State of the Union address, he said raising the minimum wage “could mean the difference between groceries or the food bank; rent or eviction; scraping by or finally getting ahead.”

Correction: The transcript of this report has been changed to reflect the correct job title of Marilyn Watkins. She is a policy director with the Economic Opportunity Institute, but was identified as a policy analyst in the original audio report. FSRN regrets the error.