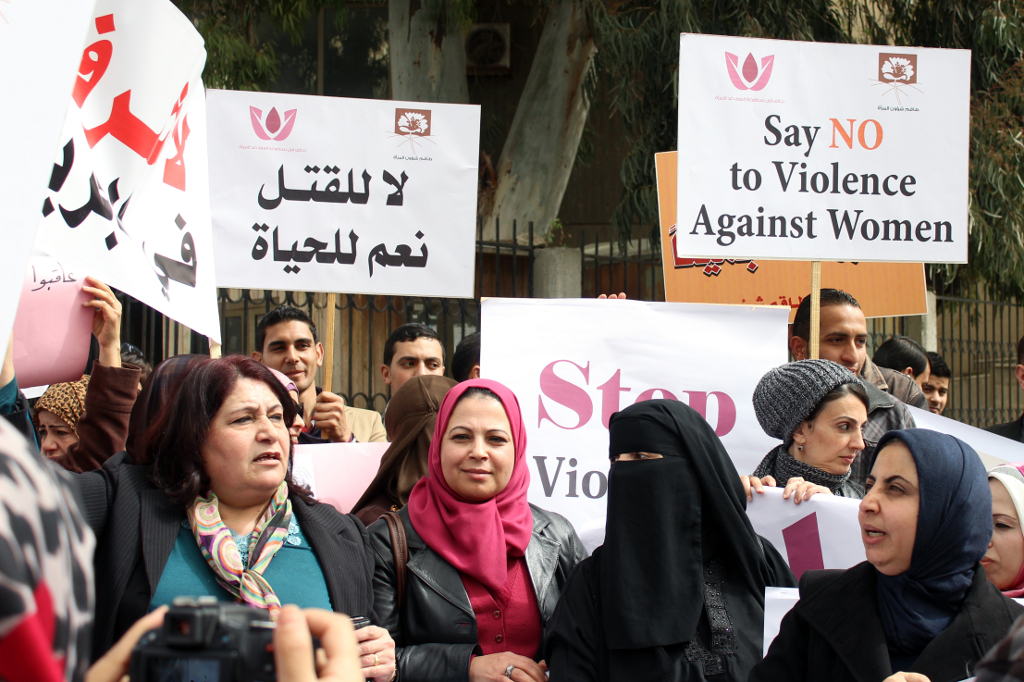 After a surge in killings of women in the Palestinian territories, women’s organizations are calling for an end to legal loopholes which allow men to exercise violence against female relatives with impunity. FSRN’s Lena Odgaard reports from Gaza.

“It was the most difficult day in my life,” is how the middle-aged ‘Im Mohammed’ describes the day she finalized her divorce and had to leave her children behind. As tears run down her cheeks, she explains how her ex-husband would beat her and their children. “When I heard him come home I would feel a pain in my body before I even saw him. Once he came home to us and started shouting that he was crazy.”

‘Im Mohammed’ doesn’t give her real name for fear of the reaction from her family. She explains that for 20 years she faced severe domestic violence. It started a few years after she got married, when at 17 her father-in-law tried to kill her after a cooking accident. She says she never pressed charges against her ex-husband or father-in-law because she was unaware of her options. Today, she tries to help women in Gaza in similar situations. But this is no easy task.

“It’s a man’s society so women don’t have the right to refuse or say no. It’s only the right of men.”

A study from 2012 by the Palestinian Central Bureau of Statistics shows that 37 % of married Palestinian women have suffered domestic violence at the hands of their husbands. Of these, half live in Gaza. According to the AMAL Coalition to Combat Violence Against Women, 28 women were killed on motives linked to “honor” last year alone – a trend, which seems to continue as eight women have already lost their lives since the beginning of the year.

This led to a call for action by the coalition, which is formed by 11 Palestinian civil society groups. “Yes to life – no to killing of women,” was the message chanted by more than a hundred women in front of the Attorney General’s office in Gaza City on March third.

“We have to take a step against this to say no for women killings in Palestine; it’s against religion, against our human rights,” said Mariam Abu Al Atta, coordinator of the AMAL coalition. “Criminals should be punished by the law.” She explained the protest was a response to two recent cases in which teenage girls were killed under the pretense of honor. According to Atta the perpetrators often argue mitigating circumstances of the women having brought shame on the family’s “honor”; for example, by having sex before marriage or cheating on her husband.

Naser Al-Rayyes is a legal consultant at the Palestinian Human Rights Organization, Al Haq. Speaking to FSRN in Ramallah he explains president Mahmoud Abbas issued a decree in 2011 annulling two previous articles that allowed for reduced punishment For men who kill female relatives in cases of adultery or protection of family honor. But perpetrators still use honor as a motive.

“The problem is not the two articles but the whole law,” says Al-Rayyes. He explains one article allows fathers to use force to discipline their daughters, which in extreme cases has led to death. Another law allows for lighter sentences if a homicide is committed while the perpetrator is in a state of extreme anger – an article often used by uncles or brothers of female victims, he says. “There is nothing called honor killing in the law. It is used it to create an atmosphere of sympathy for the murderer and his family to mitigate the sentence.”

Al-Rayyes says investigations show that in 90 percent of the cases honor is not the real motive. Instead, women are killed because of inheritance issues, for being an economic burden to the family, in cases of severe domestic violence, or to hide another crime, such as rape or incest.

Al-Haq has pushed for a new law that calls for harsher sentences in cases of honor-related crimes. This aims to protect women and discourage people from taking the law into their own hands, Al-Rayyes explains.

A new draft Penal Code was presented to President Abbas in 2011, but has never been signed. And even if Abbas approves it, it won’t do the women in Gaza any good.

Since the violent political split in 2007 the Fatah-dominated Palestinian Authority controls the West Bank while a de-facto Hamas-led government rules Gaza. The two territories are therefore run according to two different laws creating a sort of legal limbo. Adding the pressure of years of Israeli siege causing lack of jobs, frequent electricity cuts and unaffordable food and fuel, Gazan women end up as the biggest losers, says Heba Zayyan from UN Women.

“The fact is that there is a sense of lack of punishment as well as maybe it’s an issue of law and order as well,” Zayyan says. “And in Gaza also a number of socioeconomic factors that never has a one-to-one correspondence to violence but research has proved that the more poverty and unemployment there is in an environment the higher the percentage of violence in that environment.”

Although legal guarantees to protect women from violence inflicted by relatives aren’t currently a priority for officials in the West Bank or Gaza Strip, these small grassroots initiatives are at least shedding light on the sensitive issue and creating public debate.