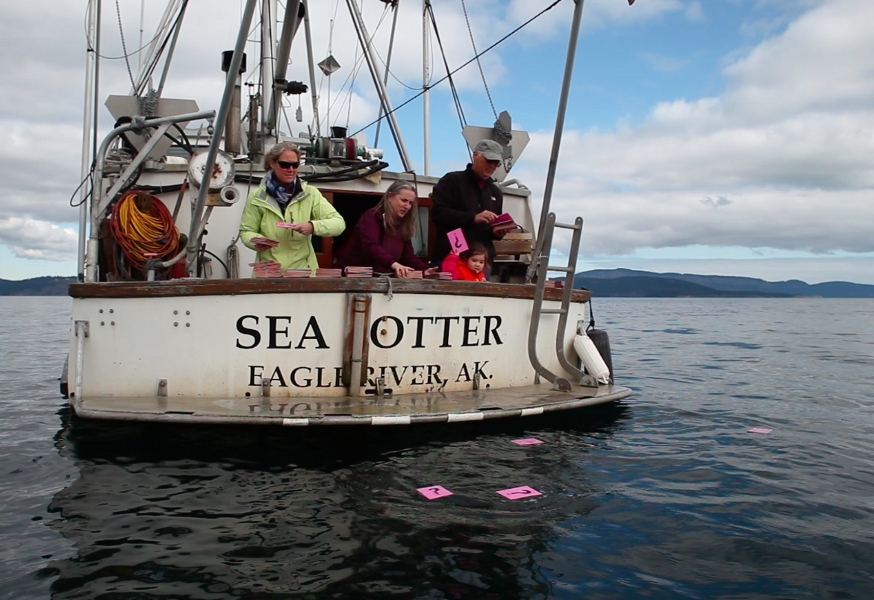 This week marked the 25th anniversary of the Exxon-Valdez disaster, the second largest oil spill ever in U.S. waters. The effects of the spill can still be seen today on the Alaska coastline and in wildlife populations.

Last weekend, another spill – this  time  in the Houston Ship Channel – dumped more than 180,000 gallons of heavy oil into Galveston Bay, threatening environmentally sensitive habitats of migratory birds and reproductive grounds of species important to the Gulf’s commercial fishing industry.

In the Salish Sea, at the northwesten tip of Washington state, a proposed pipeline is expected to increase by 600 percent the number of tankers carrying tar sands oil. Concerned residents of the San Juan Islands have launched a drift card study to simulate the route of a potential oil spill in the Salish Sea. Martha Baskin reports from the San Juans.

Captain James Slocomb navigates his boat, the Sea Otter, through near shore waters of the San Juan Islands, northwest of Seattle and south of Vancouver, Canada. The Captain and crew are on a unique mission, dropping drift cards into the water to simulate what would happen in the event of an oil spill. Tar sands oil from Canada is on the rise at refineries on the coast, adding to already heavy tanker traffic. If Kinder Morgan’s proposed Trans Mountain pipeline is approved, the company estimates its tanker traffic would increase from 60 tankers a year to over 400.

Oil spill preparedness in the Northwest has traditionally been modeled on crude from Alaska’s North Slope. The effects of tar sands, or diluted bitumen, on these waters are unknown. How it sinks depends on ocean currents and flooding from rivers which would increase sediment or mud and add to the weight of the bitumen.

“Here in the Salish Sea, we’re sloshing around twice a day with some significant tidal variations and that can move oil around very quickly,” says Stephanie Buffum of Friends of the San Juans, a conservation group active since 1979. “If our beaches are covered with oil, we will be decimating the primary food source for not only marine mammals, but fish and birds as well.” One of Washington’s most popular attractions, the San Juans are home to resident orcas, seals, salmon and marine life and represent a significant source of revenue from tourism.

Captain Slocomb, a retired Exxon Valdez first responder, was in charge of the Global Information System database for spill reports. “It was sort of something out of an apocalyptic movie with thousands of people crawling on the beach,” he recalls. “It was very other worldly and it smelled like hell.”

Slocomb checks navigation charts as the Sea Otter enters Rosario Straits between the San Juan Islands and the mainland. This is where a majority of roundabout traffic carrying Kinder Morgan tar sands and all matter of freight, including coal and crude from North Dakota’s Bakken shale fields, is offloaded at nearby refineries. “Right at the moment, there’s a tanker anchored on either side of it and there’s another one down here at the March Point refinery,” he says while pointing to the small island of Vendovi.

Gary Shigenaka is a marine biologist with NOAA who are members of the region’s well-regarded Regional Response Team for oil spills. He’s tracking the growth of tar sands shipments in the Northwest and has done long-term recovery studies of Prince William Sound. He’s also studied the nation’s biggest inland oil spill when a pipeline owned by Enbridge spilled a million gallons of tar sands oil into Michigan’s Kalamazoo River in July 2010. The EPA directed Enbridge to complete clean-up by the end of last year but extended the deadline to October of this year.

How would tar sands impact the ecosystem of the Salish Sea, San Juan Islands and Canada’s Gulf and Queen Charlotte Islands? Shigenaka describes that as “sort of the 64 million dollar question.” First affected would be biological communities on the surface of the water. As it sinks, Shigenaka says it creates a “third dimension of dealing with organisms both in the water column and potentially on the bottom, so it expands the potential for effects pretty substantially.”

The challenge for the Salish Sea and the Northwest coast is the huge increase in expected volume of oil to be transported, says Shigenaka. Whether by pipeline, rail car or vessels there are significant new sources in North America coming through the region. “These are just naturally multiplying the risks just by the virtue of the fact that there’s more coming through,” says the marine biologist. “I’ve always used the analogy of a lottery ticket. You can buy one ticket and be in the game, but if you buy a thousand tickets, your odds are better at winning. In this case, it’s a bad outcome.”

The Friends of the San Juans released 200 drift cards into the Salish sea this week. Each card has a question mark on one side and website on the other, www.salishseaspillmap.org to report the time the card was found and where. The forest certified pink drift cards state that they’re part of a study to quote “inform our knowledge of ocean currents, potential oil spills and raise awareness regarding oil spills from shipping in the Salish Sea.” They’re already getting calls from people finding the cards. They hope they’re won’t be anyone reporting a major oil spill. Ten days ago, 6300 gallons of crude oil spilled at Shell’s Puget Sound Refinery in Anacortes, but was contained.