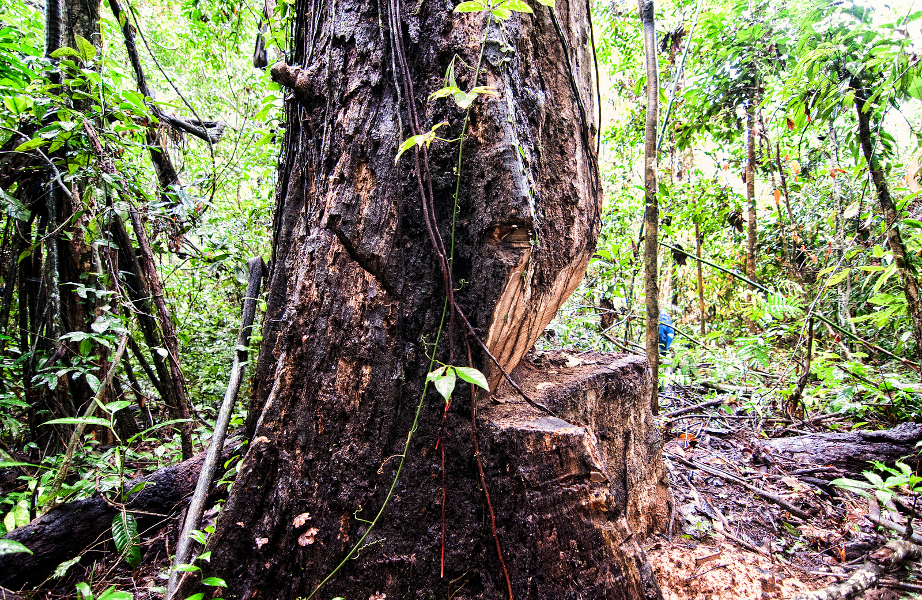 The Amazon rainforest is another imperiled carbon sink — one of the most crucial in the world. But deforestation – much of it by logging – is severely affecting the complex ecosystem. Logging activities are also taking a toll on the Amazon Basin’s indigenous communities. News broke this week that a leading forest defender and indigenous rights activist was murdered earlier this month with three members of his community in the Peruvian Amazon region near the border with Brazil. Shannon Young has the details.

Indigenous Ashéninka leader and prominent rainforest campaigner, Edwin Chota, and three other leaders of the Alto Tamaya Saweto community; Jorge Rios, Francisco Pinedo and Leoncio Quinticima were murdered September first, but news of the crime took several days to travel out of the remote Amazon region.

Prior to his murder, Chota received death threats from illegal loggers.

In a 2013 video interview posted to YouTube, Edwin Chota says institutional abandonment – from basic services to public safety – has created a dangerous vacuum along the border in which the region’s indigenous populations are left to fend for themselves against illegal loggers operating within their ancestral territories.

Henderson Rengifo, a leader of the Interethnic Association for Development of the Peruvian Jungle (AIDESEP), says that last week’s murders in Saweto are a result of the Peruvian government’s foot-dragging on granting indigenous groups legal control of their territories. “This unfortunate incident occurred because the state doesn’t see to the demands of – or its historic debt to – indigenous people to grant titles to their territories so that indigenous people can manage their own lands, forests and resources.”

While the Peruvian government granted concessions to two forestry companies to legally log within parts of Edwin Chota’s homelands, David Salisbury, Associate Professor of Geography and the Environment at the University of Richmond, says that’s not who is logging there. “Both of them have over 50 thousand dollars in debt and they’re not operating,” he told FSRN by phone from his office. “What you do have are illegal loggers who are sort of separate outfits who take advantage of the open space and the lack of legal logging taking place to log indiscriminately.”

A free trade agreement between Peru and the United States requires certification of wood sourced in Peruvian forests to show it has been legally logged. However, a multi-year investigation into the industry by the non-profit Environmental Investigation Agency found evidence of extensive fraud and little meaningful oversight.

“What happens is the loggers use falsified papers to present their timber as coming from somewhere else legally,” says Salisbury. “If you had oversight in these areas, then you could clearly see that the logging was illegal and that’s one of the things that Edwin Chota did was he geo-referenced using a GPS where all the timber was coming from and was able to map this out and show loggers were operating with impunity within his ancestral territory despite the forestry concession being inactive for the last several years.”

Salisbury worked with Edwin Chota for ten years as part of a project to obtain land titles for Saweto’s indigenous Ashéninka residents. He says that just days before the murders of the four community leaders, investigators from Peru’s forestry supervisory body traveled to Saweto to probe the allegations Chota and the others had so diligently documented.

And Saweto isn’t the only community that’s been affected.

In July, members of a so-called “uncontacted tribe” – indigenous populations that live in voluntary or circumstantial isolation – made international headlines when they crossed a river from Peru into Brazil, driven from the rainforest by illegal loggers.

Henderson Rengifo of the AIDESEP says the pressure comes from illegal loggers and also from others entities with vested economic  interest in the area’s natural resources, like mining and oil companies. “Our territories and the territories of the uncontacted peoples are being threatened. That’s why along the border between Peru and Brazil and in the Loreto region along the Peru-Ecuador boundary, the uncontacted have been emerging to cross over to the other side of the border.”

Until then, companies with official concessions have legal weight to harvest and mine Peru’s natural resources in disputed lands…and  illegal groups like loggers and drug traffickers are able to operate with apparent impunity.