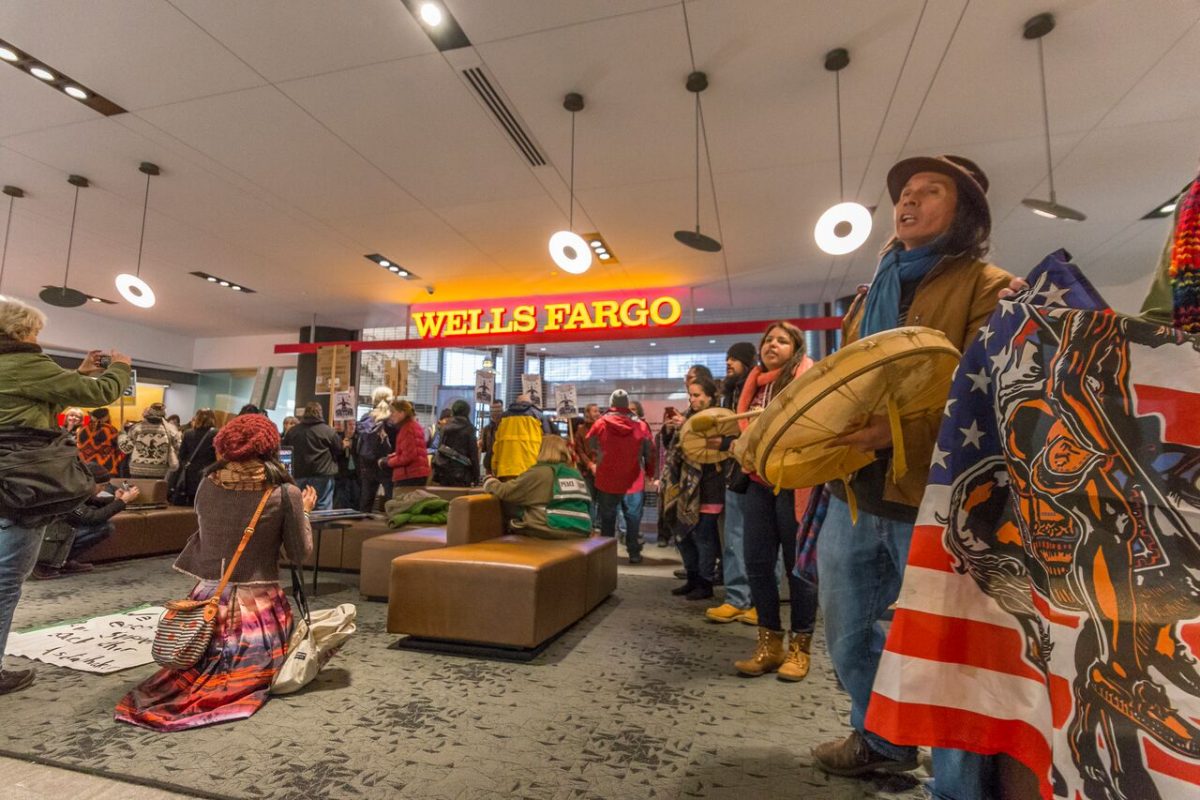 Since the fossil fuel divestment campaign began on university campuses in 2011, institutions worth $2.6 trillion have pulled their investments in coal, oil, and natural gas. The movement to demand financial institutions divest from the Dakota Access pipeline, which began late last year, is still in the early stages. Seventeen banks, including Wells Fargo, SunTrust and Citibank, are backing the pipeline.

A recent protest in Seattle, lead by native leaders and water protector allies, targeting Wells Fargo, shows the movement is gaining momentum. Wells Fargo has close to $500 million invested in the pipeline. Martha Baskin has our report.

“I believe in the power of each and everyone of you to create change and that’s why we’re here, to send that message to this bank, to send it to all the people that we are part of the changers, part of the doglee bah, part of the creation,” Paul Cheoketen-Wagner with the Saanich tribe told the crowd, saying it was time to change the bank into something peaceful and good. “We will create something beautiful out of this that is threatening our future.”

The “doglee bah” is the supernatural being many Native Americans believe created all things. Referred to by various names, it’s called upon to enlist support in confronting challenges in the natural and social world.

In this case, the “doglee bah” is being called upon to urge Wells Fargo to divest $467 million from the Dakota Access Pipeline.

“We’re all part of the doglee bah. We all have the same ability to create change,” Cheoketen-Wagner explained. “So I raise my hands to each and every one of you for that strength that you carry.”

As Wells Fargo security personnel watched from the sidelines and made sure no one else entered the bank, the crowd formed an oval and continued to chant.

Imagine you’re stepping over a stone, said Cheoketen-Wagner: “And that stone, she represents our Mother Earth, and that’s where our DNA lives.”

Wells Fargo Seattle referred media inquiries to corporate offices in San Francisco. The bank is one of 17 financial institutions world wide involved in financing the pipeline. In a statement, Wells Fargo said they were “contractually obligated to fulfill commitments under the credit agreement so long as the customer is meeting all of its terms and conditions.”

The Dakota Access pipeline, which would run from the Bakken oil fields in North Dakota down to a terminal in Illinois, is nearly complete — save for a small, crucial portion that would cross underneath the Missouri River. In early December, the Army Corp of Engineers announced it would deny an easement which would have allowed the pipeline to go under a crossing of the river at Lake Oahe and would prepare an Environmental Impact Statement. The tribe is still awaiting publication of a notice of intent to prepare the EIS in the Federal Register.

This week the Standing Rock Sioux Tribe filed a motion with a U.S. District Court in Washington, D.C. asking the court to throw out a Dakota Access Pipeline lawsuit filed against the Army Corp of Engineers late last year. The lawsuit came on the heels of the Army Corp announced the EIS would consider both the tribe’s treaty rights and alternative routes.

Meanwhile, the Wells Fargo protest in Seattle moved outside as a mock funeral procession circled the building with a 35 foot long plastic blow up pipe with the words “RIP DAPL.” Becca Lips played the part of the funeral director and was “basically giving a eulogy to the death of the pipeline.”

She also noted positive things surrounding the pipeline protests such as “giving the people a chance to unite behind the leadership of the Standing Rock Sioux, to shed a light on some of these really terrible injustices that are happening at the hands of fossil fuel companies.”

As darkness fell the protest moved to the federal building where a light box displayed the words “Defund DAPL” and “Dump” beside the neon letters of Wells Fargo, the building across the street.

“We’re just brothers and sisters, you know, trying to protect the water, our most sacred medicine,” says Roxanne White, from the Nez Pierce, Yakima and Nooksack tribes, who journeyed to Standing Rock many times last year. “It’s always the reason.”

The fight to stop the pipeline will continue, she says, but the focus needs to include divesting.

“We have to divest from these big corporations, corporations like Well Fargo because they’re the ones that are supporting and keeping Dakota Access going,” White says. “So, this is the part that we get to do apart from the front lines of Standing Rock.”

Matt Remle, a member of the Standing Rock Sioux who lives in Seattle, says divestment is focused on individuals as well as cities. Wells Fargo currently manage the city’s $3 billion employee contract.

City Council member Kshama Sawant recently introduced an ordinance that would change the process by which the contract is selected to include social justice considerations.

“If it passes, that’s a $3 billion hit that Wells Fargo will be taking over funding this pipeline,” Remle points out.

Remle says the divestment effort has already seen success. Indigenous peoples from Norway who visited Standing Rock last year, the Saami, were successful in getting Norway’s national bank to divest from the pipeline.

A recent report from the Institute for Energy Economics and Financial Analysis predicts more weakness in companies behind the Dakota Access Pipeline. The report concluded the pipeline is an example of overbuild in oil infrastructure in the Bakken region and as such risks becoming a stranded asset.