Impunity still an issue in Brazil, 50 years after military coup 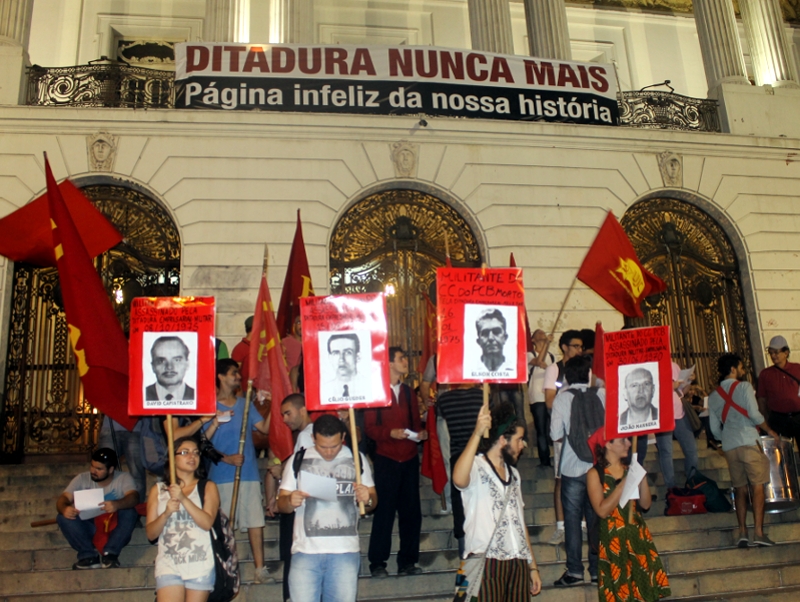 This week marks 50 years since a military coup in Brazil paved the way for 21 years of dictatorship. During the regime’s rule, around 400 people were murdered or disappeared. From Rio de Janeiro, Sam Cowie reports on how the dictatorship is seen now.

A small protest took place Tuesday after a memorial was inaugurated outside of the military club in downtown Rio de Janeiro, widely considered to be the epicenter of sympathy and apologism for Brazil’s military dictatorship.

Police dispersed the demonstration with tear gas after a protester threw a can of red paint at the building.

The memorial and the protest marked the 50th anniversary of the April 1st 1964 when a US-backed military coup ousted Brazil’s democratically-elected president, Joao ‘Jango’ Goulart.

Jean Marc, at the time a pro-coup supporter who would later go on to be arrested and spend time in prison for taking part in anti-military government activities, was 18 and downtown with a friend that day in 1964. He recalls seeing an officer fire into a crowd of protesters gathered outside of Rio’s naval club. “I was very shocked with the cowardly attack against unarmed people by the officers,” he said. “I thought these were supposed to be my people, my partners.” Marc says he saw 5 bloodied bodies fall to the ground.

Around this time, in an attempt to stop the coup, then-president Goulhart flew to Brasilia. But he lacked the support necessary to make the military stand down and the presidency was declared vacant. Goulart left the country within 24 hours. In 1966, the Military Dictatorship decided to not hold elections.

During the 21 years of military rule, some 400 people were murdered or disappeared. Thousands more were tortured, including Brazil’s current president Dilma Rouseff. In some cases, even the children of regime critics were targets. Military rule ended in 1985 and elections were held four years later.

Years before relinquishing power, the regime created an amnesty law to shield all military officials from prosecution for abuses committed.

Mauricio Santoro, a political scientist and human rights adviser to Amnesty International Brazil, says one of the strongest legacies of the dictatorship is a culture of impunity for crimes committed by state agents. “We are not a democracy as strong as we want to be, as we should be,” he commented. “We still have to move forward and one of the ways to do that is to face the ghosts of the past- to punish the people that committed these very serious crimes, crimes against humanity during the dictatorship and to punish them in order to turn the page and build a strong democracy in Brazil.”

The Brazilian chapter of Amnesty International is working to overturn the dictatorship-era law. Regional neighbor, Argentina, has already overturned their amnesty law and successfully prosecuted some former officials and torturers.

The government of Brazil established a Truth Commission in 2011 to investigate human rights abuses during the dictatorship.

Despite the harrowing stories of torture and authoritarianism, a small but noticeable hardline tendency still exists in Brazilian public opinion. In a survey published last week, a 14% claimed that dictatorship is best the form of government.

The Brazilian Military Party, a fringe political group is expected to run candidates in the 2016 municipal elections. There are also several prominent Facebook groups dedicated to restoring military rule, mostly under the pretext that Brazil’s current ruling Worker’s Party is a pseudo-communist organization.

In the run-up to the anniversary of the coup, sympathizers of the Military Dictatorship reenacted 1964’s ‘March for Family, God and Liberty,’ a march that took place 2 weeks before the junta seized power. The original march – widely seen as one of the catalysts for the coup – attracted over 200,000 marchers in both Rio and Sao Paulo. This year’s reenactments in those two cities reportedly only brought around 150 people each- a sign that, while Brazil may not be quite ready to punish the crimes of the past, it’s certainly not eager to repeat them.