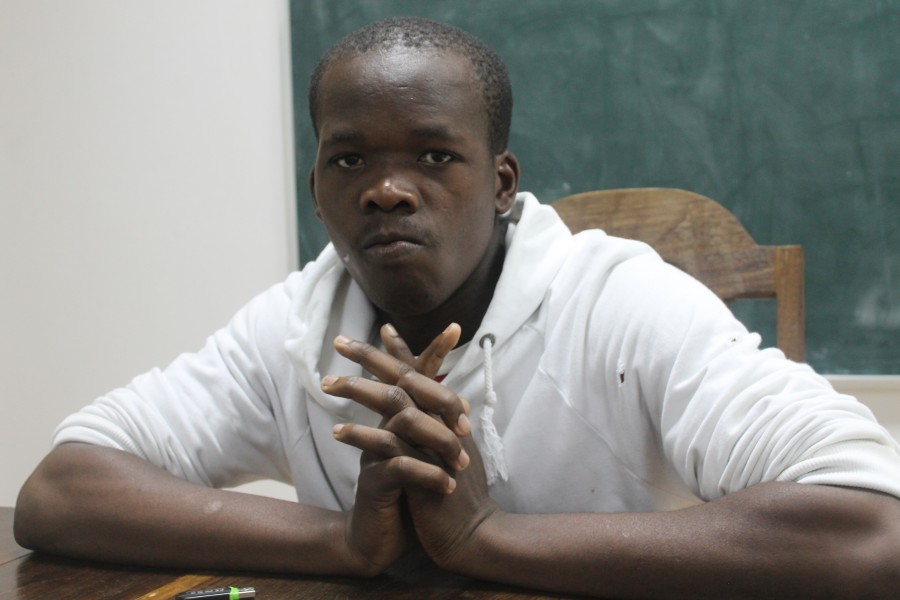 Mozambique is one of the fastest growing economies in Africa thanks to an abundance of natural resources like coal and gas. But the impressive economic growth on paper belies a serious youth unemployment crisis as young people – who form the majority of the 25 million population – struggle to find work. From Maputo, FSRN’s Sam Cowie reports.

Twenty-year-old Beto Magumane Cossa is finishing up a two-year sentence for burglary at Boane juvenile prison, about 20 miles from Mozambique’s capital, Maputo. Cossa became an orphan at 14 and for a while lived off remittances his brother sent from working the mines in neighboring South Africa. But when his brother returned home sick with HIV/AIDS and unable to work, Cossa became head of the family. His brother died shortly after he started his prison sentence.

Cossa says that he committed the burglaries because he couldn’t find a job. He says that when he is released, he will follow in his brother’s footsteps and go to South Africa to work the mines. “With South African wages, I will be able to save enough to buy the materials to build a house,” he told FSRN. “In Mozambique, you can only earn enough to buy the roof.”

Cossa’s story is a familiar narrative for many young people in Mozambique.

The Southern African nation records impressive economic growth on paper – the result of billions of dollars of foreign investment, thanks to an abundance of natural resources like coal and gas. However, it also faces a dire youth unemployment crisis – a 2012 report by the Open Society Foundation estimated that 70 percent of citizens under 35 years of age lack stable employment.

Mozambique’s huge natural resource extraction projects run by multinational firms create few jobs for locals because they rely on heavy machinery as opposed to manual labor. The few jobs that they do create tend to be highly specialized and filled by foreigners. Due to tax breaks granted to the firms which extract and export natural wealth, the impact of these projects on public revenue is small and Mozambique remains one of the world’s poorest and least developed countries – still heavily reliant on foreign aid.

National industry was all but decimated during the country’s 16-year civil war and today’s private sector creates just 18 thousand jobs per year, while 370 thousand youth enter the labor market annually. As a result, many young Mozambicans like Cossa’s brother head to neighboring South Africa – the continent’s richest country – to work in the country’s mining sector, which is still dependent on manual labor.

According to Cremilde Domingo, project coordinator at the Boane juvenile prison, the majority of inmates are serving time for poverty-related crimes, such as theft and robbery.

Twenty-one-year-old Ozisus Marachava spent two years at the Boane prison for stealing a woman’s cell phone. Marachava, who is fully literate and speaks fluent English, says he’s never had a job and has only ever earned money by running errands and washing cars. He says that the same is true for his friends. All of his family went to South Africa to work and he mentions that his brothers make their livings by traveling back and forth between the two countries, buying and selling goods.

Marachava, however, wants to go to college and is working towards completing his high school diploma. “In Mozambique if you don’t study, if you don’t go to university, if you don’t have a connected family in a company that can get you a job, it can be too difficult to find a good thing to satisfy you,” he said in an interview at the prison.

While Marachava sees university as his only route to a good job, in reality, it’s no guarantee.

“We create and develop this mentality that only with a university degree you are someone important,” scoffs Fernando Lima, a Mozambican analyst and CEO of independent media group Mediacoop. He employs several interns and says that students often leave universities totally unprepared for the workplace. “Every week we have kids coming here from university and two weeks later, they are out, because they couldn’t adapt or they weren’t trained properly.”

Connections also factor highly when trying to find a job and middle class Mozambicans complain that stable public sector jobs are reserved for those close to the ruling FRELIMO party, which has governed Mozambique since independence from the Portuguese in 1975.

During last year’s election campaign, President Felipe Nysiu promised to tackle nepotism in the workplace, which he described as a barrier to Mozambique’s development.

Analysts like Fernando Lima and members of the UN Food and Agriculture Organization say that strengthening Mozambique’s undeveloped agriculture sector – through investment in family farms and youth-specific training programs – is key to sustainable job creation for young people.

With one of the world’s fastest growing populations that is far out-pacing the growth of industry, Mozambique’s youth unemployment crisis will only get worse unless action is taken.