Proposal for a new mining law meets opposition in Bolivia 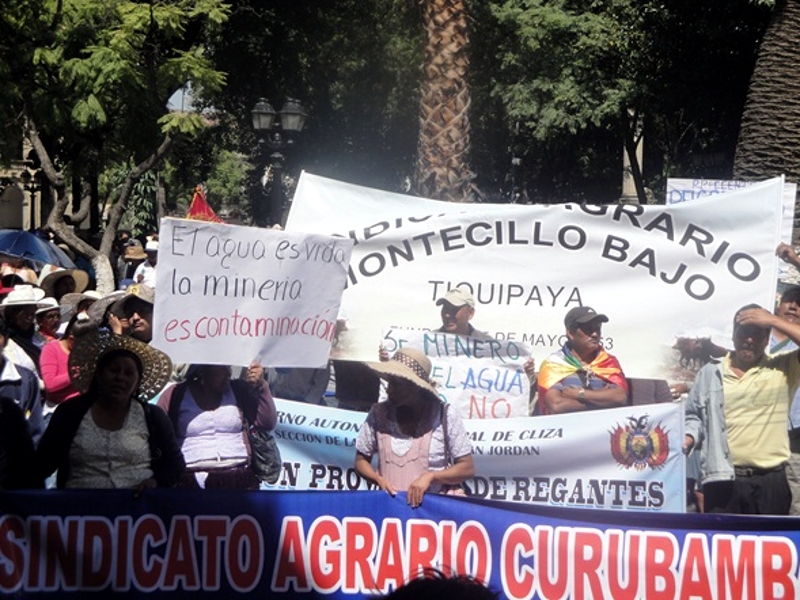 A proposal for a new mining law in Bolivia has sparked protests from various sectors of society; from independent miners organized in cooperatives to grassroots organizations of indigenous people and farmers. While these groups oppose the legislation for different reasons, all are from sectors that have been in the past – and some that still are – strong supporters of the government led by President Evo Morales. Aldo Orellana has more on the story from Cochabamba.

In throwing his administration’s weight behind a proposal for a new mining law, President Evo Morales is facing tough opposition from different sectors of civil society, including former close allies.

It’s the first major overhaul of the country’s mining sector since 1997.

Associations and cooperatives of independent miners want to be able to enter directly into mixed contracts with mining companies without having to obtain congressional approval. When the lower house of Congress passed the bill without this concession, thousands of independent miners blocked national highways.

Marco Gandarillas, director of the Center for Documentation and Information in the Cochabamba, says mixed contracts would make it easier for private mining companies to dodge labor, environmental and tax obligations by subcontracting with independent mining cooperatives. “For many companies, it’s no longer profitable to operate the mines by themselves,” contends Gandarillas, adding that many companies find it more profitable to subcontract the work out to mining cooperatives which take on all of the risk. “All of the costs and conflicts they’ve offloaded onto society and the workers in the mines. In the coming years, we’re going to see a shift from large scale mechanized production to one that’s much more manual with far greater risks to the health and occupational safety of the mine workers.”

Bolivian mining cooperatives account for around a third of the country’s mining output. They are tax-exempt organizations and pay royalties at lower rates than mining companies. Negotiators from the cooperatives argue direct partnerships would allow them to acquire new technologies and know-how and to share risks in the event of major price drops in world markets.

Congressman Jaime Medrano, who has roots in the mining sector, says that what the cooperatives are demanding is unconstitutional because, “the state cannot turn over mineral-rich areas for companies to commercialize as private property.” He clarifies that the Constitution allows the cooperative sector to partner with private companies to sign mixed contracts, but with approval from the state.

The bill has been stalled in the Senate, but debate is expected to resume next week following a breakthrough in official negotiations with the miners.

Independent miners are not the only sector of the population unhappy with the proposed mining law.

“Mineral resources, like other natural resources, are the property of the Bolivian people,” says Marco Gandarillas, the Cochabamba-based researcher. He describes the state as a mere administrator of the wealth. “That the government negotiated the mining law with only the mining sector, without consulting anyone else is unconstitutional. This law transcends social boundaries and the population has the right to know more and weigh in with opinions. The demonstrations against it are, in essence, demanding compliance with the Constitution.”

Bolivia’s Constitution – approved by referendum in 2009 – is the result of a two-year-long process of public consultation. Article 349 states the Bolivian people are the owners of the country’s natural wealth. The new Constitution also specifically recognizes the rights of Bolivia’s indigenous majority and their territorial rights.

The Council of Communities of Qollasuyu – CONAMAQ, the largest indigenous organization of the Bolivian Andes, says the proposed mining law puts mining rights ahead of collective land and water rights, fails to comply with consultation requirements and criminalizes those who attempt to block mining activities.

“We’re really just an extractivist country,” says Nilda Rojas Huanca, one of CONAMAQ’s leaders, referring to the economic model based on resource extraction for export. “The government doesn’t have public policies for indigenous people. The wealth just leaves and the local communities don’t benefit at all. We continue to live in extreme poverty.”

Access to water is another contentious issue. In Bolivia, at least half of all water sources overlap with mining concessions and, under current law, mining  companies don’t need special permits to access them. Farmers who depend on irrigation to grow their crops want legal protections for water for human consumption and farming, something the proposed new mining law does not do.

Carlos Camacho, leader of a large organization of irrigation-dependent farmers in Cochabamba says the mining law, “doesn’t doesn’t just threaten water resources, but also Mother Earth.” During a recent march, he told FSRN that mining companies are able to divert water resources wherever they operate, without without it mattering that the water is being used for farming or for human consumption. “As farmers who depend on irrigation, we will not allow them to walk all over our laws and customs nor will we allow them to dominate our sources of water,” he said.

Many Bolivians consider the Constitution to be one of the most important gains of the Morales administration, particularly with regards to indigenous rights and environmental protections. However,  Bolivia’s most valuable resources on international markets are precisely its natural gas and minerals. Finding a balance between economic self-sufficiency without angering the country’s influential social movements can be tricky. Morales should know this well… because the sectors now critical of his mining law are the same ones which put him in power.