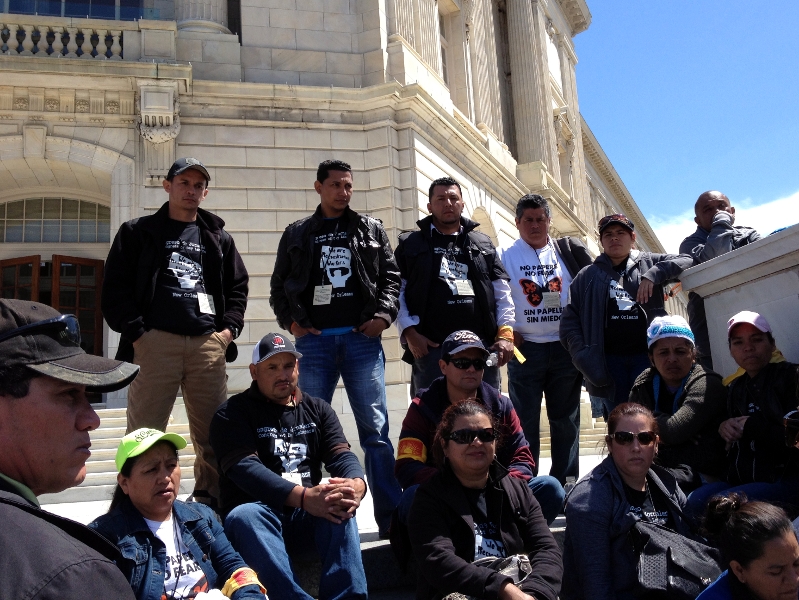 Undocumented families and their allies have been holding a vigil and hunger strike outside the White House for most of April, to put pressure on President Obama to sign an executive order putting a stop to his Administration’s record pace of deportations. Groups from Texas and Arizona came last week to protest on behalf of family members who have either been deported or are currently in immigration detention. This week, delegations from Massachusetts and Louisiana took their place, and shared their stories with our Washington correspondent Alice Ollstein.

Marina Velazquez (Massachusetts):  I’ve been on hunger strike for the last three days because my husband was arrested in our home four months ago at six in the morning. He’s currently detained in the state of Connecticut.

My message for President Obama is that it’s time to stop deportations. In Massachusetts there are so, so many families who are impacted by deportation and so many kids who are being left without their parents. In Massachusetts, I’ve seen many cases of people who are stopped while driving on their way to work and, simply for not having a license, are arrested and deported. And their children are left without a father or without a mother. That’s why I’m bringing this message to President Obama, that it’s time to stop deportations.

Stephanie Mendoza (New Orleans, Louisiana): I came here because I’ve been seeing a lot of kids who… they’ve deported their parents. They cry a lot. And I’m in process of deportation and I don’t know what’s going to happen to me in the future. I would tell President Obama to stop the deportations because he wouldn’t like to not be with his daughters, so he has to stop deportations.

Gustavo Bonilla (New Orleans, Louisiana):  I’ve been in the U.S. for 15 years and my children were born here. My motivation for being here in D.C. is that I was affected by an immigration raid that detained people who are racially profiled. I was held for 22 days in immigration detention, but with the help of the New Orleans Congress of Day Laborers, I was released. But I’m facing a deportation hearing in two months. So, we’re asking President Obama to please stop destroying our families and not to keep deporting more people.

Jenny Aguilar (Springfield, Massachusetts): I came to DC with a purpose, that purpose is to come and support my Mom and all of the families out there that are in the same situation as me because having your Dad not by your side right now is really hard. My message for Barack Obama is – if he hears this message – please help my Dad, Victoriano Aguilar, out, that he has done no harm to anybody. All he did was drive without a license and there was really no need for him to be passed on to immigration. I just really want him to stop all deportations for all families because it’s really hard.

Cesar Vargas (New York City): I’m the director of the DREAM Action Coalition. I came to the U.S. when I was five years old and, ever since then, I’ve called New York City my home. I consider myself a New Yorker. I went to the New York City public school system, graduated college, graduated law school and I’m still right now in the process of being admitted to the New York State Bar as one of the first undocumented immigrants to be able to practice law.

I got involved in 2010, during my second year in law school, for the DREAM Act, came out publicly, shared my story. Through that, just as other DREAMers inspired me, other DREAMers were being inspired by me.

I have met with the President of the United States, with DHS Secretary, with congressional members. We organized the White House hunger strike to elevated the stories of not just the DREAMers, but the families who are going through the crisis of deportations. We have made definitely an impact to that point that we realize that we may not have the money, but we do have the compelling stories of people, of gaining the hearts and minds of the American public and I think that’s something that scares any politician.