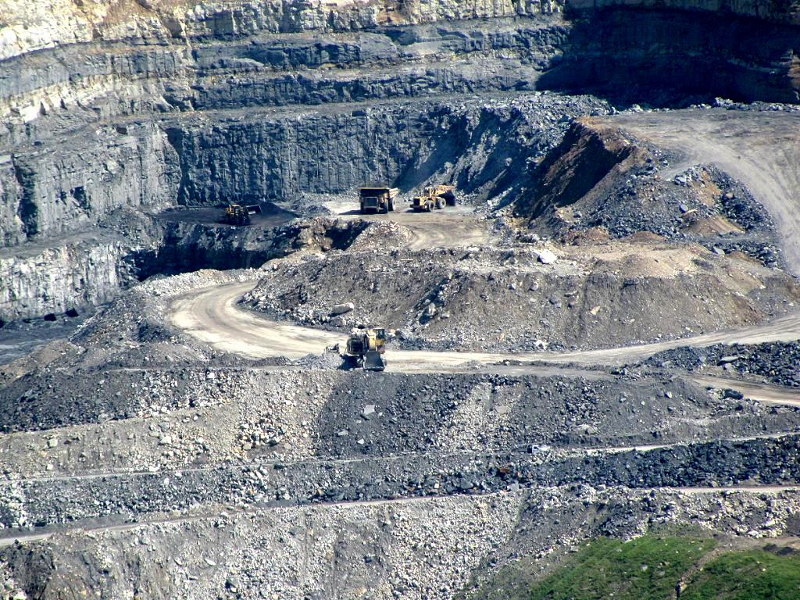 Fourteen activists with Hands Off Appalachia made their fifth court appearance on Earth Day, April 22, in Connecticut Superior Court in Stamford. Their arrests stemmed from an action last November where some of them locked down inside and outside the Stamford corporate offices of financial services company UBS, to protest the bank’s support for mountaintop removal coal mining operations. Others scaled a construction crane and unfurled a banner condemning UBS’s role. This comes as the share price of stock for some coal companies has dropped and the industry faces an uncertain future. Melinda Tuhus reports from Stamford.

The 14 are charged with trespass, breach of peace and conspiracy to commit both. The individuals who scaled the crane are also charged with “trover” – a common law action stemming from the appropriation of private property. The crane company was seeking to recover $30,000 in damages for the down time allegedly caused by the banner drop.

Dustin Steele is from Mingo County, West Virginia, and was one of two people who put intertwined U-locks around their necks and locked down last November to a railing inside the UBS corporate office. “UBS funds companies like Arch, which is presently trying to destroy Blair Mountain and also Patriot, which has just succeeded in stealing working people’s pensions and health benefits,” Steele told FSRN while awaiting arrest. “So, we’re here at least for one day to hold them accountable for the really damaging practices they fund. They’re the silent partner. They get no pressure but without the money that UBS facilitates, mountaintop removal would not be possible. And we gotta make sure that banks like UBS know that people of Appalachia won’t stand for this.”

Earlier this month, UBS downgraded both Arch Coal and Alpha Natural Resources from “neutral” to “sell” and lowered the target price for both from $5 to $3 a share. Lower prices for natural gas have pushed down coal’s profit margin, but some investors in coal are also concerned about the stricter environmental regulations currently under consideration by the Obama administration.

Ricki Draper, who locked down with Steele during the November action, spoke at a small rally before their court appearance on Tuesday. “UBS just recently downgraded Arch and Alpha holdings, and that actually had a big effect on those companies,” she said. “And we understand that’s mostly for economic reasons; coal right now is not doing well. At this point, we want to say for economic reasons you’ve done this, but now issue a policy because of the human cost of coal, and issue a policy saying you will not fund these companies or support these companies financially again.”

A UBS spokesperson responded to requests for comment with an emailed statement in which the company, “recognizes the potential environmental, social and human rights impact” of the mining industry sector. According to the statement, in 2010 the company adopted “an enhanced due diligence and approval process [which] is triggered whenever UBS engages in a potential transaction with a coal mining company that uses MTR as an extraction method.”

Activists counter that while UBS’s policy on mountaintop removal also claims to take into account regulatory compliance, federal regulators say that Alpha had “a long history of noncompliance with the Clean Water Act.”

Joanne Sheehan, a Connecticut peace activist and supporter of Hands Off Appalachia, went to the UBS corporate office Tuesday morning with two others to try to deliver an unsealed letter. She said Hands Off Appalachia wrote a letter to UBS, “reminding them of all the people in Appalachia who have been harmed through the coal mining process; mentioning to them that this month JP Morgan Chase updated its environmental policy that will be ending their financial support and relationships around mountaintop removal and asking UBS to do the same.”

Sheehan told FSRN a guard directed them to the mail room and “by the time we got there, there were several police cars that pulled up, and detained us. They wouldn’t let us leave. And then the bomb squad came.” Police took their bags and patted them down before taking the letter. The three were released with a warning that they would face arrest if they returned to the property.

Several recent peer-reviewed studies have shown a significantly elevated risk of both cancer and birth defects for those living near mountaintop removal sites. Both water and air contamination are serious problems.

The letter to UBS also referenced three coal-related disasters since January. One was the contamination of drinking water for 300,000 people in West Virginia by a coal-processing chemical. That was followed by a coal ash spill in the Dan River in North Carolina, followed by a spill of more than 100,000 gallons of coal slurry into a river in West Virginia.

The UBS 14 left court on Tuesday with a date to return on June 11 for yet another appearance. Ricki Draper says the almost monthly trips have eaten up a lot of time and resources that could be better spent organizing in southern Appalachia. And while the activists recognize the decline of coal, she says the industry still owes a big debt to the region: “We want to target them and make them accountable while they’re still in these communities, while they still have open permits so that they are accountable to the land, instead of just leaving and we just want to make them clean up their mess.”

While communities struggle with illness and environmental destruction, organizers are pushing for passage of a bill in Congress called the ACHE Act – the Appalachian Communities Health Emergency Act – introduced last year, with 46 co-sponsors. It would put a halt to mountaintop removal coal mining while government health studies are done to determine the impacts of the practice on local residents.