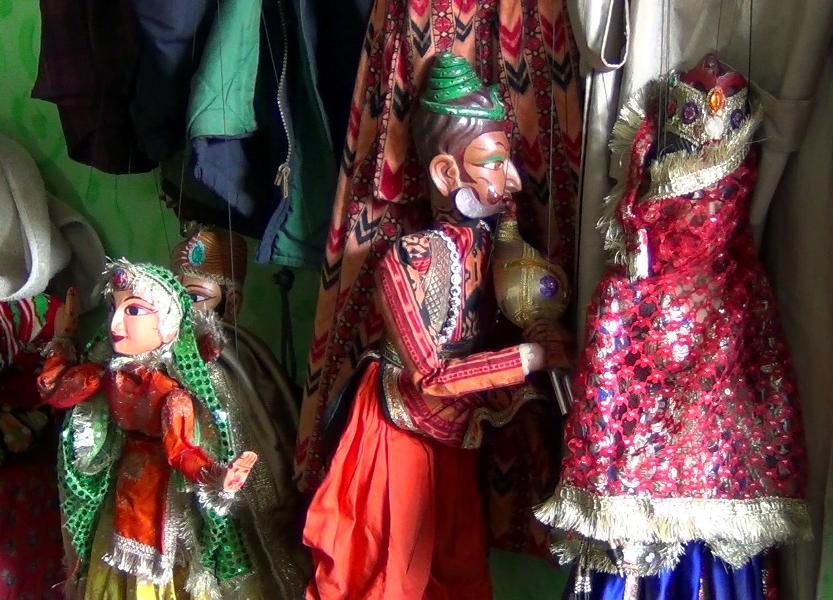 The colony takes its name from the Hindi word for wooden puppet.

Thousands of street performers and traditional artists are at risk of losing their homes as authorities in India’s capital New Delhi plan to raze a slum to make way for an upscale housing development and shopping mall. More than 3000 families living in New Delhi’s Kathputli or Puppeteers’ Colony have been told to vacate the area. But as Bismillah Geelani reports, the community is resisting the move.

Sitting in a small room on the roof of his house, 65-year-old Puran Bhat –  one of India’s most famous puppeteers, is busy preparing for an upcoming puppet show. He looks worried. Like other residents in the area, he has recently received notice that his house is slated for demolition.

“We have been completely kept in the dark about all this,” he said of the notice. “It’s only recently that we came to find out that this land has been sold to a developer. They have been deceiving us all along. The notice calls us squatters while in fact we have been living here for 50 years.”

Bhat lives in Kathputli Colony, a slum area in the western part of New Delhi.

The local government has entered into a partnership with a private developer for a huge construction project that is to include high-rise apartments and a large shopping mall. The government says the project is part of its plan to make the capital slum-free.

“We are temporarily shifting them to a transit camp for two years and after that they will be brought back and they will be accommodated in the buildings that will come up here,” says Omvir Singh from the Delhi Development Authority. “We have given the builder just two acres of the total land. What he does with that is his headache but what we want to do is to give them a better life.”Singh insists  the current residents will eventually receive housing at the same site, but with service hook-ups like electricity, water, wide roads and a proper drainage system.

Residents, however, voice strong skepticism. “They’re all excuses, they are misleading people, they just want to displace us!” warned one resident at a recent public meeting. “They will throw us into the transit camp and we will all rot there, nobody is coming back, there’s no such agreement!” The residents cite several past examples where slum dwellers were promised resettlement but were totally forgotten once the demolition took place.

Magician Aziz Khan is among the most celebrated artists in the Kathputli neighborhood. One of his claims to fame is that he holds a Guinness World Record for the great Indian rope trick, but he’s upset with the way artists like him are treated in India. “When the government wants to showcase Indian culture to the world they look to the Kathputli colony and we are presented as the cultural ambassadors, but when they have to make deals and dollars they conspire against us and displace us,” he told FSRN. “Culture is of no consequence for them when compared to making profits.”

Kathputli is home to more than 3000 families of puppeteers, magicians, acrobats, dancers and musicians. Some say they make up the world’s largest community of street performers. But with narrow streets, no garbage collection and lack of basic services like safe water and proper sanitation, the settlement also has an extremely unhealthy environment.

Bhagwan Das is one of the earliest settlers in the area. He says residents want their living conditions to improve, but their vision differs from the government’s plans. “We gave our sweat and blood to this land and nurtured it, and now we are being driven out after 50 years,” says the 75 year-old Das .”Even if they give us flats in high rise buildings what will we do with that? We are traditional artists; we have a different lifestyle and work culture. How can we fit in there?”

Traditional puppetry was once the main occupation of most of the residents here. But over the years, it has experienced a rapid decline. However, a handful of dedicated puppeteers like Puran Bhat are still struggling to keep alive what is now largely considered to be a dying art.

“The art never dies but the audiences die and when an art form does not attract audience we say it is dying,” clarifies Bhat, adding that the difference in the way his art is received abroad and at home brings tears to his eyes. “The foreigners say it is magic and what I like most about them is they appreciate and respect their art forms and ours equally. But here we reject our heritage and accept with utmost warmth whatever comes from the West. If this is the attitude, our art forms are sentenced to death.”

Bhat says the electronic media, especially television, is partly responsible for keeping audiences away from traditional arts like puppetry. But at the moment, his main concern is the eviction notice that has cast an impending sense of doom over the Kathputli colony.

Bhat calls the resettlement effort an attempt to wipe the colony out. “The government’s approach is to make a large building, put the artists in there and put a large gate over it and lock the artists inside,” he says. “Let the artists lose their livelihood, let them starve and let the art and the culture die. And all this has to be done because a developer has to earn a profit from the land.”

While the authorities are not yet using force to remove people from the area, the residents say the officials are trying to divide them and weaken their resistance using harassment, intimidation and – in some cases – even bribing locals.