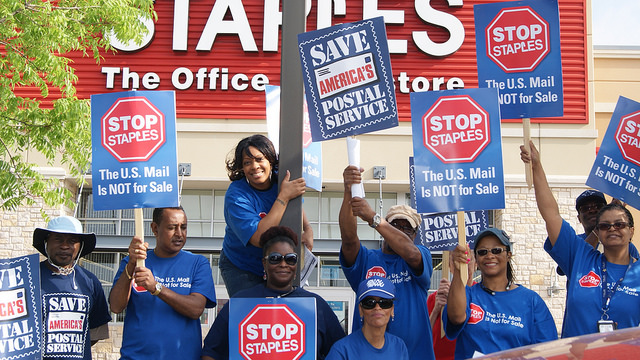 Unionized postal workers and supporters recently took to the streets in 56 cities across 27 states to protest an agreement allowing Staples office supply employees to handle the mail. The Postal Service says the Staples partnership will help ease its debt. But the public-sector American Postal Workers Union says the plan will accelerate the death spiral of America’s postal system and that the only way to save it is through Congressional action to remove a line item that’s been crippling the institution for nearly seven years. FSRN’s Larry Buhl reports from Los Angeles.

A pilot program to operate 82 quick service postal counters at Staples locations in four states has been running since last November, and Staples plans to expand to all of its 1,500 locations by September. Counters staffed by Staples employees provide most of the same shipping services as post offices.

The Postal Workers Union says this amounts to privatizing an essential public service to a for-profit company, and they want these outlets to at least be staffed with trained postal employees. They say the poorly paid and poorly trained Staples workers would take their jobs and that the deal would open the door to similar partnerships with other large private businesses.

“If this happens, and our workers are not used there and the postal service decides to expand to the over 1500 stores of Stales and their employees then we’re going to be looking at job loss,” says California’s United Postal Workers Union President Michael Evans. “And 40 percent of our unionized jobs are done doing retail and windows.”

The Postal Service says the Staples partnership is nothing new, and that 40% of postal revenue already comes from online purchases or private retail partners like Walmart, Costco, and Walgreens.

Postal Workers Union spokesperson Sally Davidow says the partnership is unique, and an ominous sign for the future. “There are many other outlets that sell stamps, there is nothing like the services provided in staples stores,” she said. “They’re replacing good living wage jobs, with low wage high turnover jobs.”

Most Americans know that the post office has been operating in the red, and they assume it’s because of declining mail volume, email and e-commerce. But the union says the Postal Services’ real woes are a direct result of the 2007 Postal Accountability and Enhancement Act that WAS signed into law by President George W Bush.

The USPS doesn’t actually receive a cent in tax dollars, but it still needs Congressional approval to make any changes to its structure. Last year, the agency lost $5 billion — an improvement over the record $15.9 billion in 2012.

The Postal Service has tried other ways of saving money. It reduced hours at more than 7,000 post offices nationwide and consolidated 143 mail processing centers. In 2013, the post office stopped delivering first class packages on Saturday. But even with those measures, it’s facing a one hundred billion dollar shortfall.

Last year, Postmaster General Patrick Donahue placed the blame for its record 2012 loss squarely on Congress. “And of the 15.9 billion dollar loss, 11 billion is due to the amount we were obligated to pay the treasury to pre-fund retirement benefits,” he explained. “We had to default on those payments because we did not have the funds.”

An analysis by the Postal Service last year showed without the requirement to fund future retirement benefits, it would have a $1.5 billion surplus. Some post office supporters and union members say that the 2006 law is working as planned: to send the Postal service into a death spiral. They say the Postal Service, WHICH has America’s largest unionized workforce, is up against competition like FedEx and UPS, and against big contributions from those organizations to members of Congress.

The postal workers union says instead of privatizing services, cutting jobs and eliminating post offices, the U.S. Congress needs to step in to undo the damage started in 2006. There have been committee hearings for two years, but no legislation. Solutions generally fall along party lines. Republicans like Representative Darrel Issa of California are pushing for more post office closures, cutting jobs and eliminating collective bargaining rights.

Democrats recommend actions such as moving to five-day delivery and allowing the U.S. Postal Service to recover over-payments into the federal pension system. The union says nothing short of removing the pre-funding retirement benefit mandate, and helping the institution modernize and innovate can save it.

It’s an election year, in a sharply divided Congress, and that makes passage of any sweeping laws unlikely. Until Congress acts, the Postal Service will continue to look for potential cutbacks and partnerships like the one with Staples.

Union members point out another issue with partnership. According to Stacy Davidow, Staples is in financial trouble too. “Staples just announced in March that they plan on closing 225 stores.” Further, she explains, “because they are a private business they have every right to go ahead and do that, they don’t have to answer to anybody, they don’ t have to give the public any opportunity for input. The difference is that the postal service is accountable to the American people.”

Davidow says the partnership could result in reduced access to mail services nationwide if more Staples stores go under. In fact the site of one of the recent protests, the downtown Los Angeles Staples, is projected to close this year.