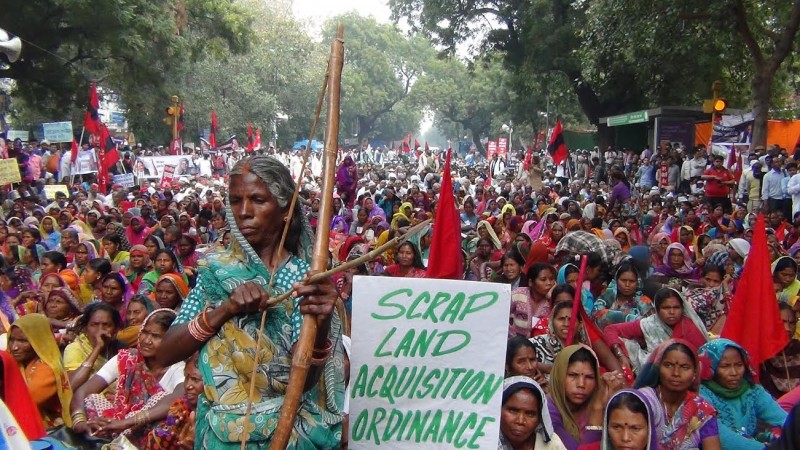 Lawmakers in India are considering changes to the law that governs land acquisition – or eminent domain. Today the lower house of India’s Parliament passed a bill to reverse restrictions placed on land acquisitions that came after nationwide demonstrations by farmers in 2013.

The rollback of these farmer-friendly protections prompted the main opposition party to walk out in protest during the vote. The bill now heads to the upper house where the ruling BJP party does not have an absolute majority.

Government take-over of private land for corporate and industrial development has been highly a sensitive issue in recent years – and is often met with strong resistance from farmers and other groups who depend on the land for their livelihood. Bismillah Geelani has the story from New Delhi.

Fifty-five year-old Ram Gopal is a farmer from the Central state of Madhya Pradesh. Until a few years ago, he owned 17 acres of land that allowed him to earn a comfortable living. But in 2011, the government seized his entire property for a Canal project and life has become difficult for him and his family. He found work as a construction laborer, but his now meager income can’t even feed his family properly.

“There were 20 farmers in the village whose land was taken away. ,” Gopal explains. “ We didn’t oppose the project, but we wanted land in return.  The government said they would give us ample compensation. But what we were actually paid as compensation was less than what we would earn from our land in a year.  I married off my two daughters and the compensation money finished with that.  Now I have to travel almost 20 miles every day to find some work. I have two sons, the days I get work –  we eat, the days I don’t –  we go hungry. This is grave injustice to farmers. They are taking away our lone source of livelihood so mercilessly.”

Forty year-old Devraj Sharma’s family was first displaced 50 years ago, when the construction of India’s highest Bhakra Dam began in their ancestral village in Himachal Pradesh. His father bought 2 acres of land in a neighboring village and settled there. Now the government plans to build a new highway that will pass through their new home village and Sharma has been served a notice to vacate the land.

“This is dictatorship,” Sharma says. “They are doing everything arbitrarily. Everything is being done for the rich to make them richer and the poor are just being finished off. When we were evicted from the Bhakra area we were told that we would be rehoused and allotted an equal amount of land. To this day we haven’t seen that and now we are being chased away from here. We are completely dependent on then land, we get everything from it and it’s being snatched away from us. Where will our children go, what will happen to them?”

Both Ram Gopal and Sharma are victims of India’s controversial Land Acquisition Act, a British-era law that governs the process of eminent domain – under which the government can expropriate private property for development projects, industries and special economic zones.  The law is stacked against farmers and land owners, and does not allow them much input if their land is selected for takeover to make way for a project.

The recent years of rapid economic growth in India have brought large scale land acquisitions across the country, threatening their existence. In 2013, farmers, tribal people and other groups dependent on the land organized nationwide protests. As a result, the government introduced some amendments that radically changed the eminent domain law.

“The first thing was about consent, no land was to be acquired without the written consent of farmers,” explains Bhupendra Rawat of Bhumi Bachao Andolan or Save the Land Movement. “The law also required a social impact analysis -that studied the possible effects the acquisition of land in a particular area would have on different sections of the society and environment.  Then there was a ban on the acquisition of agricultural land producing multiple crops to ensure  food security.  And finally there was a provision that if the land has not been put to any use after five  years, it would be returned to the farmer.”

But when the new BJP government took over last year, without any discussion in Parliament, they amended the law again, striking down all of these changes. Finance Minister Arun Jaitley says the changes were necessary because the law was hampering development by making land acquisition almost impossible.

Jaitley says in order to strike a balance between private use and public benefit “the provisions related to payments higher compensation, relief and rehabilitation will remain untouched [while] the procedural rigors will be loosened or eased.”

While corporate and industrial interests welcomed the changes – opposition parties and farmers are up in arms against the move. Joined by politicians and social activists, thousands of farmers from across the country recently marched to the Parliament in New Dehli demanding immediate revocation of the new Land Acquisition Law.

Noted anti-corruption activist Anna Hazare addressed the crowd: “What this government is trying to do is to snatch away poor farmers’ land and give it to the industrialists. This is something that even the British did not do. They were not as unjust as this government has turned out to be. Before the election they sought your vote saying that they will bring good days, now you know who the good days have come for, it’s for the industrialists.”

India is currently the world’s fasts growing economy. But the country’s agricultural sector that has been the backbone of the economy – providing livelihood to more than half the population – is in dire straits. In last last two decades, nearly 300,000 farmers have committed suicide and more than 15 million have left farming.

Analysts say agriculture, and by extension the plight of farmers, has already dropped to the bottom of the government’s priority list and that any legal changes that make land grabs easier will push the sector – and those who depend on it – to the brink collapse.