Russian government cracks down on independent media and opposition websites 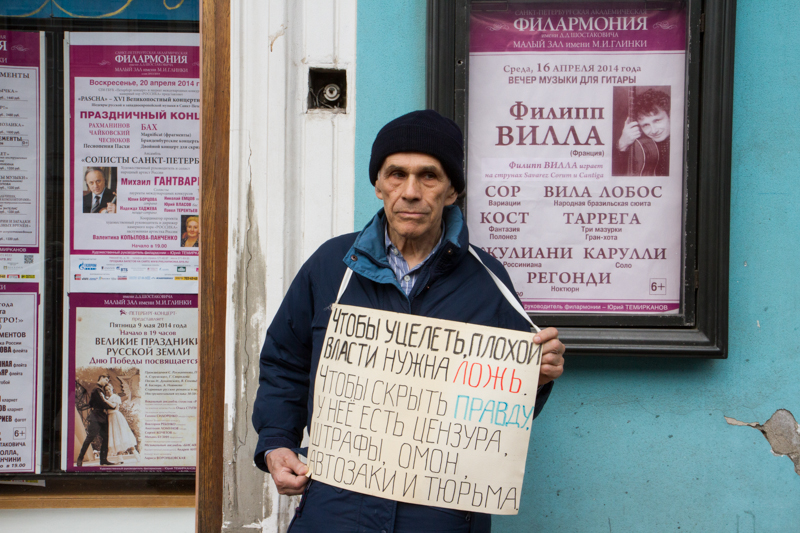 Vitold Zalesskiy, an 85-year-old member of the "Solidarity" movement and the NGO "Memorial", is holding a sign which says, "Bad power needs to lie to survive. To hide the truth, it has censorship, penalties, special police forces, police vans and prison".

News websites, blogs, and a television channel that have served as independent sources of information and aired voices of the opposition in Russia are being shut down, either under direct order of the government or through indirect official pressure. Media censorship in Russia has surged since the start of the crisis in Ukraine and has been accompanied by an increase in official propaganda on state-owned television stations. Russian opposition activists and independent media are now organizing to maintain their hard-earned rights to free expression. Ekaterina Danilova reports.

A Russian federal agency has blocked the independent opposition outlets Grani.ru, Kasparov.ru, Ej.ru, because it said the sites encourage illegal activity and incite riots. The blog of Alexey Navalny, a leading opposition activist and anti-corruption campaigner, has also been blocked. The stated reason is that he is currently a suspect in a criminal case.

Roskomnadzor, a federal executive body responsible for the control and supervision of media, is carrying out a law enacted in February which allows federal prosecutors to block any website without judicial oversight.

“This law is so wild, barbaric, anti-constitutional and contradictory to all international standards, that almost everything can come under its elastic criteria,” says Julia Berezovskaya, General Director of Grani.ru. “This law was passed to create some kind of special club for unwanted websites. Now that they’ve enacted it, we were the first to get hit with the blow. And this blocking measure is in fact permanent. According to the law, it is valid until we delete the offending content, but we don’t know what to delete. The situation is absurd; we would have to delete all the content on our site.”

In addition to websites, Dozhd – an independent news channel carried on cable and satellite networks – is facing possible closure under indirect political pressure. Nearly all networks have dropped the station after a controversy erupted over a question it posed to people about the blockade of Leningrad during World War II, during which many people starved. The station asked on its website, “Would it have been better to surrender Leningrad to the Germans in order to save people’s lives?” Many officials and veterans considered the question to be offensive and demanded the closure of the channel.

Another free speech casualty is Lenta.ru, an internet news outlet that fired its editor under government pressure. The site ran an interview with a Ukrainian right-wing opposition leader about the protests in Kiev. Most of the site’s journalists resigned in solidarity.

Berezovskaya connects the wave of media censorship with the ongoing pressure on civil society, as well as the state’s invention in Ukraine. “In the logic of war; crackdowns, increases of repression, and limitations on the use of public space are all part of a single process,” she says, adding that she thinks military censorship of Grani.ru’s coverage of events in Ukraine is what prompted the blocking of its website. “Measures targeting digital media were taken mostly at the peak of those events, the crisis, and during Russia’s intervention in Crimea.”

Another aspect of the crackdown on independent media is the increase in propaganda on state-run television channels, which fill the remaining media space.

Boris Vishnevskiy, a representative in the St. Petersburg Legislative Assembly, came out to a recent street protest against censorship of the media and internet. “I see how the mechanisms of political censorship and political pressure work,” he said. “I see, for example, that on federal TV channels it is practically impossible to express any critical attitude concerning the actions of our government in Ukraine. That means political censorship. I don’t believe that journalists themselves, of their own will, refuse to hear other opinions. I think that it’s the result of certain pressures on them.”

Many activists say the official TV channels are inciting hatred in society with their propaganda. According to Natalya Tsymbalova of the Democratic Petersburg coalition, “95 percent of the so-called information in state media is false and aims to dumb people down, to pull the wool over their eyes, to create the image of an enemy, to set people against each other and so on.” She says censorship in Russia is increasing to levels not seen since the Soviet Union and even worse. “The state is afraid of truth, it’s afraid that people will know what is really happening. It’s actually a sign that the state is increasingly going down the path of totalitarianism, like during the Soviet era, but in even more detestable ways than before, because now there is much more hatred and aggression on TV.”

Journalists and media outlets impacted by the ban’s censorship are organizing to fight back. Some plan to open new media outlets. Others are working to unite the journalist community to start an anti-censorship campaign with the assistance of international organizations and foreign colleagues. “We don’t know how broad this campaign will be,” says Julia Berezovskaya, “but it’s necessary to make people aware of this problem and it’s very important to spread the information about how to keep the government from jumping down our throats and dictating what we should and what we shouldn’t see on the Internet.”

The Russian parliament is now discussing legislation that would force popular bloggers to register as accredited media, which many consider to be another step in the crackdown on free expression. Social networks are also expected to be targeted in the future.