Journalist James Risen: will he be jailed for not revealing source? 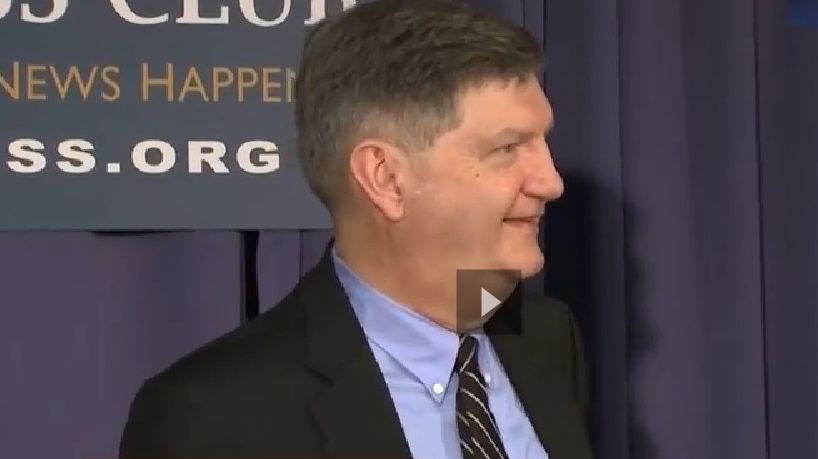 While President Obama and U.S. Attorney General Eric Holder have asked this week for law enforcement in Ferguson, Mo., to not jail reporters for doing their jobs, press advocates are asking the administration and the Justice Department to stop prosecuting a New York Times national security correspondent for doing his. As Ashley Westerman reports from Washington, DC, the years-­long case of James Risen has had a chilling effect on journalists and whistleblowers.

A New York Times journalist and author is still waiting to find out if he’ll face jail time for not revealing a source. Federal officials have long sought to force James Risen to reveal where he got information for his 2006 book “State of War,” in which he chronicled a bungled C.I.A operation intended to undermine Iran’s nuclear program. The federal government suspects former C.I.A. officer Jeffrey Sterling, and wants reporter Risen to testify against him.

Last week, journalists and press freedom groups presented a petition to the Justice Department, calling for an end to all legal action to compel Mr. Risen to reveal his source. Risen faces steep fines and even even prison for refusing to testify.

Risen says the government turned this into a fight over press freedom when they said in a court brief that there was no such thing as reporter’s privilege.

“And so they turned this case into a showdown over the First Amendment and over the Freedom of the Press in the United States,” Risen said at a press conference after the petition was presented. “And so I’m happy to carry on that fight, but it wasn’t me who really started it.”

“They’re criminalizing journalism basically,” according to Marcy Wheeler, author of the Right to Know column at ExposeFacts.org. She says citizens deserved to know about the botched C.I.A. program. “And he did a really important thing by telling us about it and, yet, the government wants to prosecute Sterling and is threatening to throw Risen in jail for trying to defense his own journalism.”

Her article this week entitled “A Tale of Two Alleged Iran Nuke Leakers” looks even deeper into the Risen case and analyzes the stark contrasts between how Jeffrey Sterling is being treated and how another alleged leaker – General James Cartwright – was handled. Cartwright, whose been named Obama’s favorite general, was reportedly the source for a separate story by David Sanger, also about a botched effort to thwart Iran’s nuclear program, but no one in that case has been charged.

“I don’t think either one of them should be prosecuted, but I think that the Obama administration really is very selective about which leaks they choose to prosecute and which leaks their behind and that’s a problem,” which Wheeler says raises questions.

Jesselyn Radack, director of National Security and Human Rights at the Government Accountability Project, says neither Risen nor Sterling have done anything illegal.

“I don’t think either of them has done anything wrong,” Radack says. “Both of them have done what whistle blowers always do, expose fraud, waste and abuse and what reporters do, which is to report on that.”

“These prosecutions are occurring based on so­-called leaks, which more often than not, are acts of whistle blowing that get reported in the media,” she says. “And journalists have always relied on a reporter’s source privilege that exists in almost all 50 states.”

Radack and other press freedom advocates want federal legislation to protect journalists and whistle blowers. But so far, proposed measures have included big loopholes carving out exceptions for national security and intelligence personnel.

According to the AP, Attorney General Eric Holder has said no journalists will be sent to prison for doing their jobs for as long he oversees the Justice Department. But the department has also not moved to withdraw its subpoena seeking to compel Risen’s testimony.

For now, both Risen and Sterling are in a holding pattern – but the case is expected to move forward soon.