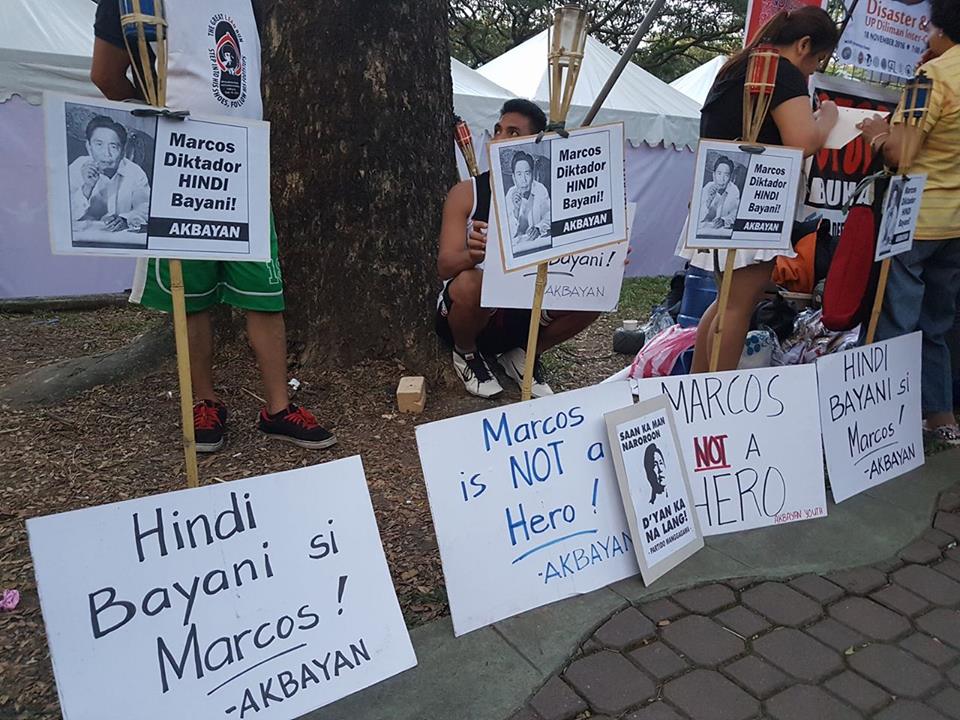 Thousands in Manila and various parts of the Philippines are protesting the burial of former president-dubbed-dictator Ferdinand Marcos at the nation’s Heroes Cemetery. Madonna Virola has more.

The family of ousted former President Ferdinand Marcos secretly moved his remains to the national Heroes’ Cemetery in mid-November after the Supreme Court ruled in favor of a petition from his relatives.

Marcos ruled the Philippines as a strongman for 20 years before he was toppled by the People’s Power revolution in 1986. His U.S. allies flew him to exile in Hawaii, where he lived until his death three years later.

Under his decades-long rule, over 3,000 political opponents and dissidents were killed and tens of thousands tortured. Around 100,000 people have died in an armed conflict he started in a Muslim-majority region of the country that only recently reached a peace accord. And his corruption-riddled administration incurred a US$25 billion debt.

For many of those protesting the burial, it’s a sign that current leaders are returning to a not-so-distant authoritarian past.

“We will continue to engage President Rodrigo Roa Duterte on his discourse about historical grievances,” says human rights activist Mags Maglana, a rally leader from the current president’s hometown of Davao City in the southern Philippines. “We will remind him that he cannot rail against the historical injustices committed by colonizers against Filipinos, particularly the Bangsamoro and indigenous peoples, without acknowledging and also standing against the large-scale and systematic abuses and violations during the time of Marcos.”

For many years, the waxed remains of Marcos were housed in a mausoleum in his hometown in Vigan, northern province of Ilocos Norte.

The movement of the former strongman’s remains have sparked more than street rallies. On Tuesday, chairperson of the National Historical Commission of the Philippines Maria Serena Diokno resigned from her government post in protest.

The Commission is an agency under the Office of the President and responsible for the conservation and preservation of the country’s historical legacies.