Traditional healers in Africa and the global market for indigenous medicine 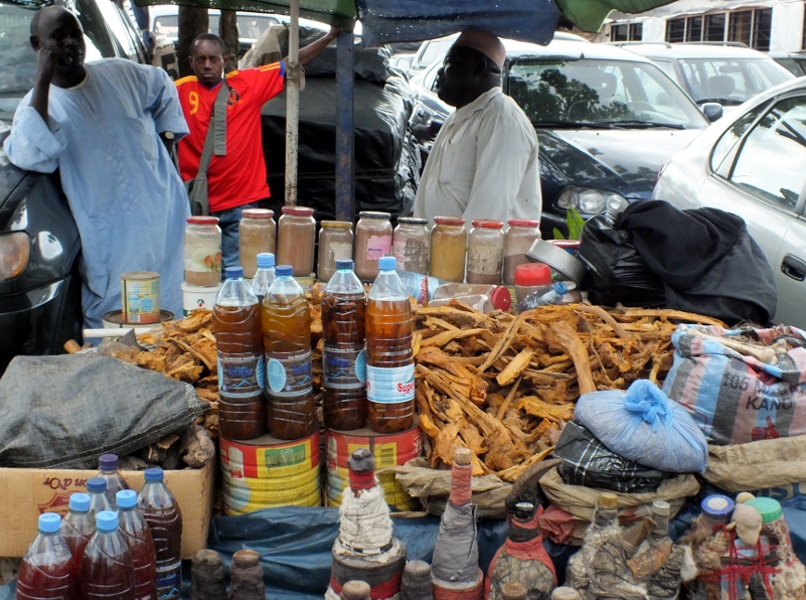 While dwarfed by the profits of the patented pharmaceutical industry, trade in traditional and alternative medicine generates billions of dollars worldwide each year. China, India and Korea have been particularly successful at marketing and selling traditional medicine products on an international level. Now, some Afican associations are pushing for standardization of their traditional medicine in order to break into the industry’s global market. FSRN’S Ngala Killian Chimtom Reports from Yaounde, Camaroon.

David Chinda slits the neck of a rooster and sprinkles the blood on a mixture made from medicinal plants. The plants were gathered from deep within the Kilum-Ijim Mountain forests in the Oku, a rural community in Cameroon’s North West Region renowned for traditional medicine. After obtaining the plants, Chinda sliced the herbs and boiled them in a clay pot to create a medicinal mixture. His patients drink the mixture to treat their ailments.

“This can treat a variety of diseases, like stomach aches, rheumatism, headache and malaria,” said Chinda.

In this particular case, the patient is suffering from stomach disorders. There is no specific scientific diagnosis, but the herbalist determines what herbs to use based on her symptoms. The rooster blood adds mystery to the treatment.

“The rooster is a sacrifice to the gods to ensure that they bless the treatment, and ensure that it works. Our fathers used this and we are using this today and people get better.”  He adds that traditional healers can only treat, “but the cure comes from the gods and we must therefore get them on our side.”

It is not the first time Chinda has treated Elizabeth Fru, who says, “He is a wonderful herbalist. He removes stomach aches the same way a mother removes a chigger from a child’s foot.”

Chinda claims that traditional African medicine is better than Western medicine because it uses a holistic approach to treatment. He says some illnesses are mysteriously caused, adding that if the spirits and the gods are not invoked it will be difficult to treat the patients.

The World Health Organization defines traditional medicine as “the knowledge, skills and practices based on the theories, beliefs and experiences indigenous to different cultures, used in the maintenance of health and in the prevention, diagnosis, improvement or treatment of physical and mental illness.”

“This business is worth almost $90 billion globally,” according to Odumodou. “It is a lot of money and we shouldn’t play with that.”

Mr. Odumodou says Africa can only benefit from this market value by standardizing the continent’s traditional medicine. Odumodu defines standards as a set of criteria that both practitioners and patients accept as quality control, saying “Africa must make use of its abundant flora and fauna to make sure that the rest of the world buys our traditional medicine.”

Many of the drugs Africans buy from the West at exorbitant prices have their origins in Africa, and have been used traditionally for ages. As a case in point, Amanda Gabanda of the Traditional Medical Association of South Africa cites Pelargonium Sidoides, commonly referred to as Umckaloabo or South African Geranium. The plant used to treat bronchitis in South Africa.

“In 1827, there was a German prince who was sent to Africa, as was the culture at the time, because he had tuberculosis. When he got to South Africa, he was taken to a traditional healer in the Eastern Cape of South Africa who gave him this medicine and he was cured of his TB.” Gabanda continues, “He then took the formulation back to Europe. And it was about 1927 that the University of Vienna started to analyze it when they realized that it actually does work. Today, they’ve registered it as a medicine which works for bronchitis treatment. What they did was just standardizing what was originally there and that’s it, and it’s now a global bestseller.”

According to Mrs. Gabana, such an effort will require incorporating Western scientific concepts into African traditional practices. The example of Asian countries could however act as a guide.

“What they have done very well is that they are focused on their practice as it is,as well as trying to fulfill Western criteria. So in China, you’ve got standards for traditional medical practice, you’ve also got standards on how to identify the active ingredients in plants which starts fulfilling the Western criteria. But what they’ve also done,” continues Gabanda “is teach people how to do observation and document their own results for patients which starts building up the body of knowledge and evidence as to whether things work or not. As with us our own evidence is words. We haven’t documented. What we need to do is to teach people how to document..

She insists that African traditional medicine should maintain its traditional values. “We shall not extract chemicals and form them into drugs,” she said.

Odomodou deflects concern that Chinda’s killing of a rooster as part of treatment could be interpreted as witchcraft, saying “When we encounter problems of witchcraft, no problem. What do you think about airplanes? We can make witchcraft also to be beneficial to society.”

For Chinda, it is a culture handed down from  the forefathers and he will not part with that,  he says, “because it works.”