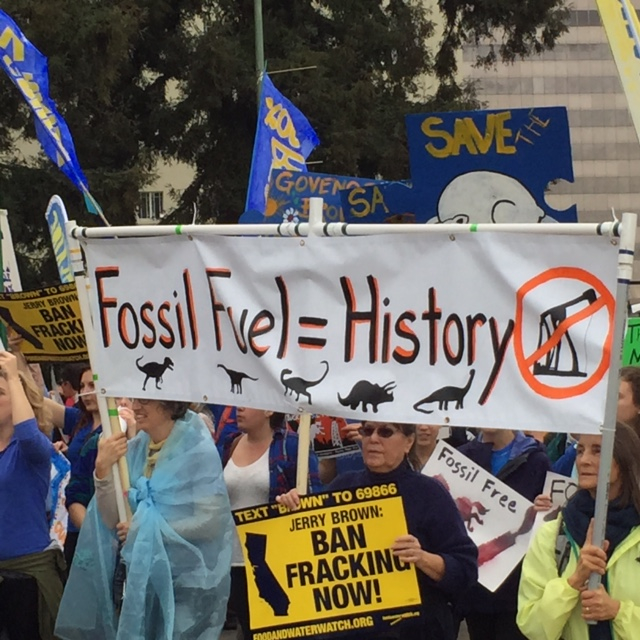 About 8,000 Californians took to the streets of Oakland on Saturday calling on Governor Jerry Brown to follow the lead of New York Governor Andrew Cuomo and issue a statewide ban on fracking. Fracking, or hydraulic fracturing, is an oil and gas extraction process in which water and chemicals are injected into the ground at high pressure. Activists and environmentalists say fracking contributes to climate change, pollutes communities and wastes a massive amount of water — a particular concern for a state in the midst of a historic drought. Though Governor Brown has embraced some environmental issues while in office, participants in Saturday’s march insist that a real climate leader would not support fracking. FSRN’s Andrew Klein reports.

The thousands of people who turned out for the March for Real Climate Leadership in Oakland were in a festive mood as they called for a statewide fracking ban.

Voters in two California counties, San Benito and Santa Cruz, passed their own local bans during last year’s elections. The bans passed despite hefty spending by the oil and gas industry which portrays fracking as a key to energy independence.

“The oil industry has tremendous power in California,” according to Sacramento-based investigative journalist Dan Bacher who focuses on environmental politics. “Most people don’t know it’s the most powerful corporate lobby in the state.”

Much of the oil lobby’s spending last year helped defeat a fracking moratorium bill in the State Legislature. That legislation would have replaced Senate Bill 4, which Governor Brown signed into law in 2013 after taking nearly $2.5 million from the oil lobby.

Activists and scientists alike have criticized the 2013 bill for codifying weak fracking regulations.

Andrew Grinberg of Clean Water Action says the Brown administration has failed to rein in an industry that uses millions of gallons of water each day.

While fracking creates competition for scarce water supplies, there are also other environmental concerns.

“The more oil we extract through fracking the more we burn, the worse global warming, and the more global warming induced droughts we’re going to have like the one scientists are saying we’re having now,” says Adam Scow, California Director of Food and Water Watch. “So the solution is to ban fracking and transition away from fossil fuels.”

That transition is already happening under Governor Brown, who vowed in his inaugural address this year to place California on the path to 50 percent renewable energy by 2030. But participants in the march say this benchmark is too modest and want Brown to ban fracking now. But so far that hasn’t happened. Instead, under Brown’s leadership fracking is spreading especially in the Central Valley.

“Communities in the Central Valley have long been impacted by a whole bunch of different environmental issues: pesticides, poorest earth quality in the nation and now fracking,” according to Juan Flores, a community organizer with the Center on Race, Poverty and the Environment who lives in Kerns County, the county with the most fracked wells in the state. “We are here, walking and marching and protesting in the hope that Governor Brown, as Governor Cuomo, believes that fracking must be banned.”

Whether Governor Brown will heed this call and follow the state-wide example of New York Governor Cuomo remains to be seen. But in the meantime, activists will continue to fight on the local level. The next battle comes March 3rd when residents of La Habra Heights will vote on a fracking ban in their town.