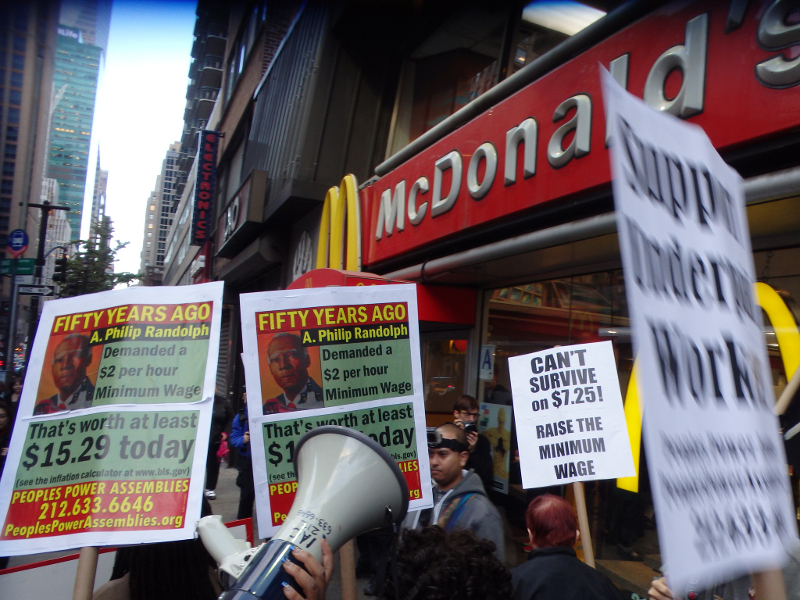 Fast food workers across the U.S. went on strike Thursday, staging sit-ins and walk-outs to bring attention to a years-long campaign to raise industry wages to $15 an hour and allow workers to join unions. The demonstrations spurred several arrests and the disruption of business at fast food restaurants in many major cities.  Ashley Westerman reports from Washington, D.C.

Fast food workers in more than over 100 cities staged acts of civil disobedience Thursday, part of a nationwide movement for better wages. They rallied in front of Burger King in Miami, walked out from behind counters at Bojangles in Charlotte, and staged sit-ins in front of  McDonald’s in New York City’s Times Square. In at least six cities, home healthcare workers joined “The Fight for $15” call for a higher minimum wage.

In Glendale, Wisconsin – just south of Milwaukee – twenty-year-old McDonald’s cashier Natasha Carson spent her day off supporting her colleagues who participated in the demonstration there. “I’m struggling right now so I know they are struggling, so why not support each other?” she said.

Carson, who works two part-time jobs and still lives at home, helps support her mom as well as several family members. She says she’s in debt but can’t climb out because working part-time at $7.60-an-hour, she’s living paycheck-to-paycheck “and I don’t even catch up with my bills, I put my Mom’s bills in front of mine. So $15 an hour I would say would help out ten times more than $7.60.” Carson says she doesn’t understand why she and other workers have to live this way, while McDonald’s makes billions of dollars a year.

Leaders of “The Fight for $15” movement want to know the same thing. A study released earlier this year by Demos found the average fast food CEO earned almost $24 million in 2013.

Average pay for fast food workers is around $9 an hour, or less than $19,000 a year. Christine Owens, Executive Director of the DC-based National Employment Law Project, says that’s just not enough to support oneself, much less a family. “The demand for $15 is what hardworking adults feel legitimately that they need to earn in order to be able to make a living for the work they do.”

Owens says while $15-an-hour would amount to only about $30,000 in annual wages, it would be enough to help people start saving – especially in a multi-income home.

However, opponents say $15-an-hour is an unreasonable amount that would hurt job growth and raise consumer prices.

Peter Morici, an economist at the University of Maryland, says wages that high would only help workers who manage to keep their jobs. “So much unemployment would be created that overall as a class they’d be worse off,” he told FSRN. “There would be a lot more poverty in America and it would actually cause the economy to shrink.” Morici noted a study by the Congressional Budget Office released in February estimated the minimum wage hike would cost the economy 500,000 jobs.

However according to the Center for Economic Policy and Research, all but one of the 13 states that raised their minimum wage on January 1st saw employment gains. Further,  longer term analysis of jobs and wage data since 2000 shows “little or no” relationship between modest wage increases and available jobs.

Matt Haller, Senior Vice President of the International Franchise Association, says “The Fight for $15” is all part of an orchestrated effort by the Service Employer’s International Union to boost their membership. The SEIU, which represents about 2 million workers in the U.S., Canada and Puerto Rico, is a leading advocate of the movement. According to Haller, the fast food strike is “a special interest campaign to grow their steadily dwindling coffers and their membership which has been declining for decades.”

The National Employment Law Project’s Christine Owens says these claims crop up every time a wage hike is debated. And she says while “The Fight for $15” is separate from the federal minimum wage debate, there’s no ignoring that fast food workers have had a real impact on public opinion by “raising the issue of low wages and what it means not only to the workers themselves and their families, but to the community they work in. You know, we can’t really build strong communities and a sustained economy on low wage jobs.”

While a proposal pushed by President Obama to raise the federal minimum wage to $10.10 stalled earlier this year, advocates are hoping Congress makes the issue a priority when they return to session next week.