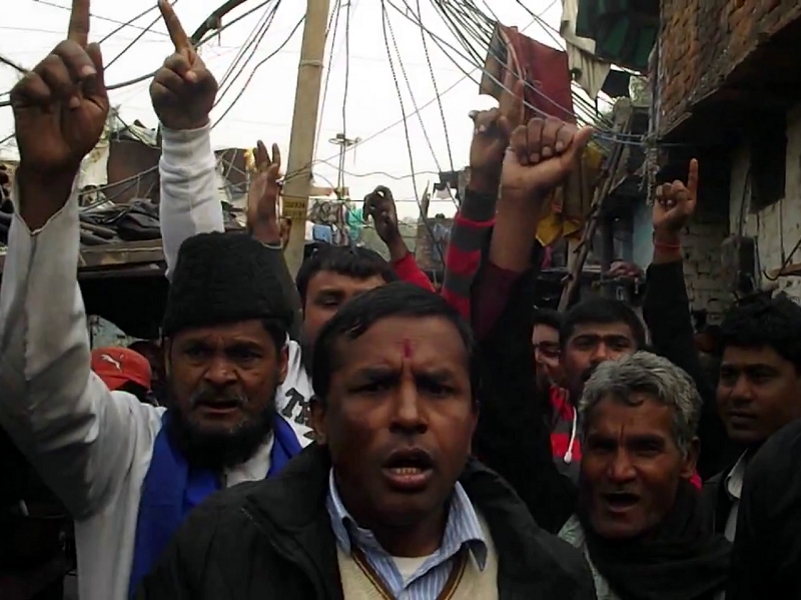 Many resident oppose plans to move them and cite past examples in which developers promised resettlement but forgot displaced slum dwellers once the demolition took place.

A warm greeting from the FSRN team. Today’s program is our first since FSRN fell silent seven months ago.  This return to the airwaves is the result of months of hard work behind the scenes and online.

In February, we debuted a new website at fsrn.org. There you’ll find both the audio and print versions of the stories you hear on the air, as well as additional content like photo essays and articles. We hope you’ll visit the site and let us know what you think.

Many listeners and stations have told us our daily newscast is sorely missed. While resuming daily production isn’t yet a reality, we are pleased to be able to self-distribute this weekly edition of dispatches from our network of grassroots reporters from across the country and around the world.

Protests and rallies took place across the US around the world on May first to commemorate International Workers’ Day. In Turkey, demonstrations erupted across the country after the government banned labor rallies in the center of Istanbul. Riot police fired tear gas, pressurized water and plastic bullets at demonstrators who came out to defy the ban. This, on the same day the Washington DC-based think tank Freedom House released its annual press freedom report, downgrading Turkey’s media from ‘partly free’ to ‘not free’ in the context of what critics say is rising authoritarianism in the country. FSRN’s Jacob Resneck has more from Istanbul.

Unionized postal workers and their supporters recently took to the streets in 56 cities across 27 states to protest an agreement allowing Staples office supply employees to handle the mail. The Postal Service says the Staples partnership will help ease its debt. But the public-sector American Postal Workers Union says the plan will accelerate the death spiral of America’s postal system and that the only way to save it is through Congressional action to remove a line item that’s been crippling the institution for nearly seven years. FSRN’s Larry Buhl reports from Los Angeles.

A passionate debate has erupted in Connecticut over the treatment of transgender juveniles under the care of the state. It focuses on one 16-year-old who was under the care of the Department of Families and Children but was transferred to the Department of Correction because of violent behavior, even though she has not been charged with, much less convicted, of a crime. The trans community nationwide as well as other supporters in Connecticut have demanded that Jane Doe, as she is known, be placed in a therapeutic setting to deal with severe childhood trauma. Melinda Tuhus reports from Hartford.

Thousands of street performers and traditional artists are at risk of losing their homes as authorities in India’s capital New Delhi plan to demolish a slum to make way for an upscale housing development and shopping mall. More than 3000 families living in New Delhi’s Kathputli or Puppeteers’ Colony have been told to vacate the area. But as Bismillah Geelani reports, the community is resisting the move.

Zimbabwe media have nothing to celebrate on World Press Freedom Day

May third is World Press Freedom Day, but members of the media in Zimbabwe say they have nothing to celebrate, because the country’s laws continue to criminalize the practice of independent journalism. At least five journalists were arrested in the past week on charges including illegal possession of broadcasting transmission equipment, publishing stories which allegedly incite violence and destroy the character of prominent business people. From Harare, Garikai Chaunza reports.