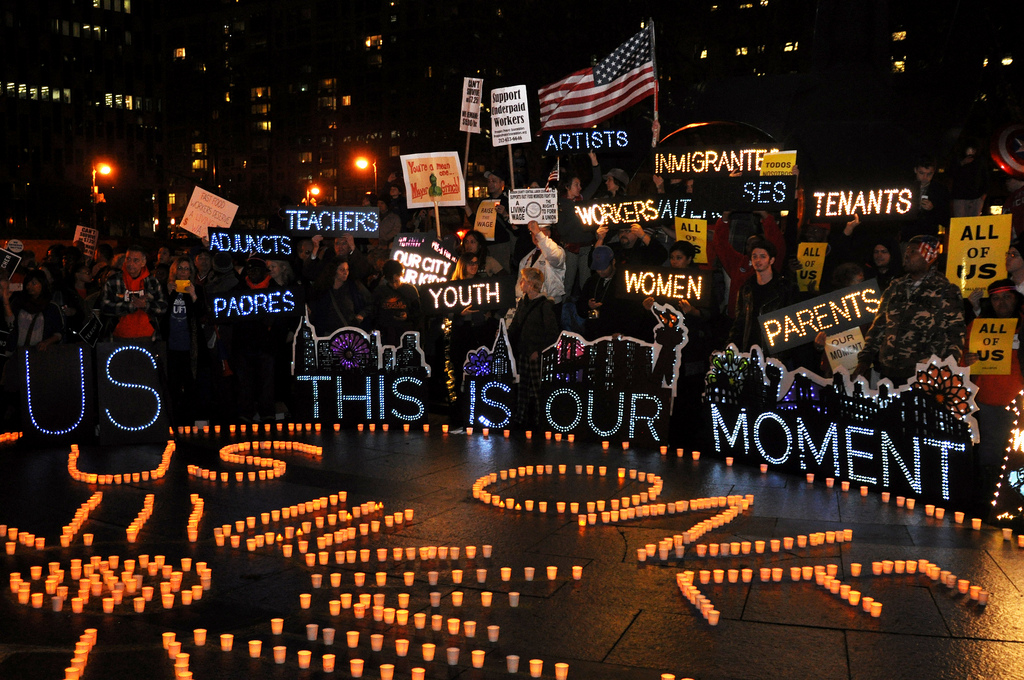 Efforts to raise the minimum wage at local and state levels are gaining traction. In Seattle, the City Council is expected to pass a measure today that would raise the city’s minimum wage in phases to $15/hour. A similar proposal is before Chicago’s city council, where the mayor has given an advisory board 45 days to come up with draft legislation. And California’s Senate has also sent a bill to the state Assembly that would raise the state’s minimum wage to $13/hour. At the same time, fast food workers have been organizing their own nationwide campaign to pressure employers for a living wage. Jessica Desvarieux has more.

With a membership of about two million workers, the Services Employees International Union, or  SEIU, has been organizing fast food workers for the past two years.

Historically, fast food workers have not had organizing potential, the number-one reason being that the majority of fast food workers used to be teenagers with no long-term plans of staying on the job. But that face has changed.

A report by the Center for Policy Research found that only 30 percent of fast food workers are actually teenagers. The vast majority are adults, with more than 25 percent of them raising at least one child. John Smith, one of the authors of the report, says another surprising finding that challenges the stereotype “is that at least a third of fast food workers have some college or even a college degree.”

SEIU organizer Kendall Fells adds that this changing face from a transient teenager to a breadwinner mother means a new direction for organizing. Fells says the union is “focused on winning the campaign and getting the industry to the table.” Details like whether the workers will organize in an international union or a local union or pursue a national contract are secondary.

But whatever unionization looks like, it certainly won’t be easy, says former union organizer Roger Crowther. He helped organize the first McDonald’s in North America in the 1990s. They received enough signatures to start the union, but they ran up against the giant of the fast food industry —  McDonald’s. Crowther says after an initial signup and application for certification, McDonald’s was “able to delay the campaign through various tactics.”

“And we did move towards a collective agreement,” recalls Crowther. ” It took us about a year. But they never accepted the recommendations of a mediator. And so in time we lost the certification.”

The unionization effort eventually failed in Canada, and until today there are no unionized McDonald’s franchises in North America.

Executive Director of Harvard Law School’s Labor and Worklife Program Elaine Bernard says the law is the true obstacle getting in the way of fast food workers’ ability to organize.

“Our labor law was set up at a time where, you know, the assumption was that physically where you are is also your employer of record,” remarks Bernard, adding “of course, in fast food we’re looking at franchises. So in one sense you might work for McDonald’s, but you don’t actually work for McDonald’s, the big multinational corporation; you work for the local franchise. And so who is your employer? Well, your employer is actually whoever owns that franchise. The lack of power between, say, an individual fast food worker and a massive corporation is just total asymmetry in power.”

Though the fast food industry may seem like a Goliath, with billions in profits last year, CEPR senior economist John Schmitt says past organizing movements can be of inspiration, specifically the Justice for Janitors movement in the 1980s. It allowed for one contract in a certain market to apply to all janitors across that market.

“It’s possible to see at least part of what’s happening in the fast food business in a similar sort of way, you have similar kinds of circumstances,” commented Schmitt. “You have a fairly high turnover labor force that works, often, not for McDonald’s directly or not a fast food company directly, but they work for a franchisee. And the franchisee is extremely constrained in terms of what they can do with respect to how they operate their business. And the real power is not with the franchisees in most cases; it’s with the corporate management that sets the structures for both the franchisees and for the employees.” Schitt says the real challenge in the fast food context is to bring the large national corporations directly to the table and into the negotiations.

There is certainly momentum growing towards fast food workers and increasing the minimum wage. Michigan is poised to become the next state to raise its minimum wage. It will raise it over the next four years to $9.25 an hour. This move by the Republican-controlled legislature would block a November ballot which would have raised it to $10.10 an hour, mirroring the federal bill, which still waits for a vote in Congress.

This report was produced in partnership with The Real News Network. See an extended, video version of this story here. Photo credit: Michael Fleshman via Twitter. Licensed under Creative Commons.