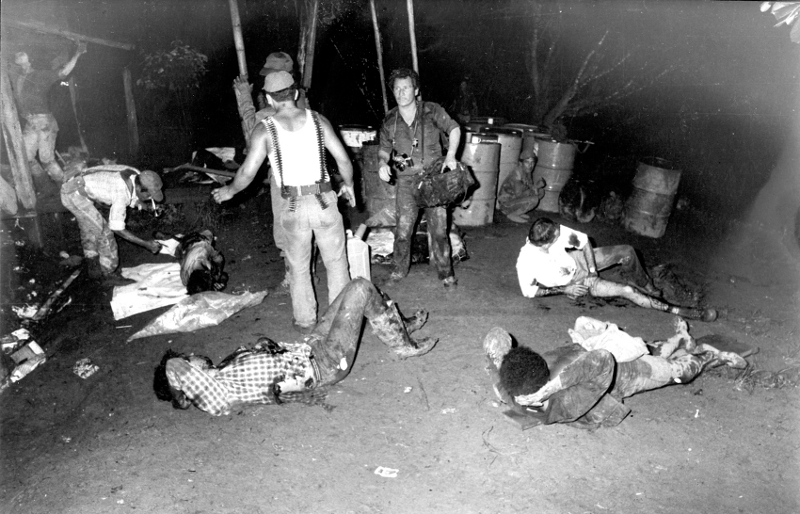 Thirty years ago today a bomb went off at a press conference in Nicaragua during the height of the Contra war. Today, journalists in Costa Rica remember the bombing and look for answers to the still unsolved crime. FSRN’s Norman Stockwell brings us this report.

Download
May 30th is “The National Day of the Journalist” in Costa Rica. It marks the anniversary of a 1984 bombing that took place in La Penca, just across the northern border inside Nicaragua. Four people were killed, another 15 severely wounded during a press conference called by guerrilla leader Edén Pastora.

The bombing killed three journalists, Costa Ricans Jorge Quirós cameraman for Canal 6 TV, and his assistant, Evelio Sequeira, and US reporter Linda Frazier of the Tico Times. Her husband Joe Frazier who was then Latin America Bureau Chief for Associated Press, remembers that day:

“I’d come back from dinner,” he recalls. “I got to the Intercontinental Hotel, and the clerk whom known for many years, since the ‘79 revolution said ‘Señor Frazier, there’s been a…there’s been an explosion on the San Juan River.  You need to know this.’”

Costa Rican journalist Nelson Murillo, now retired, was a few feet away, asking Pastora a question when the bomb exploded.

“I ended up burnt, injured, fractured, I was two months in physical therapy in a Mexican hospital,” remarks Murillo, who was left with one shorter leg, progressive deafness, PTSD and spinal problems because of the shortening of the leg. “I’ve already had 30 surgeries because of problems beginning in La Penca, they took 70 shrapnel pieces out of me, metallic pieces of the bomb; since it was homemade it had everything: screws, BBs, thumb tacks, etc. It’s been a pilgrimage through the hospitals over 30 years.” Murillo says other survivors had to live with visible maiming and amputations, but of those alive today, he has the most serious health problems.

Edén Pastora, also called Comandante Cero (“Commander Zero”), was a charismatic former Sandinista who was leading a rebel army against the Nicaraguan government headed by Daniel Ortega. Pastora was forming a southern front based out of Costa Rica. Stephen Kinzer, New York Times bureau chief in Managua at the time explains Pastora had fallen out of favor with the CIA, which was funding operations to overthrow the leftist Sandinista-led government.

“The CIA was eagerly recruiting people who were not tainted by collaboration with the old dictatorship,” explains Kinzer.  “Pastora was perfect for that. He was not only untainted by collaboration with Samoza, he had lead one of the greatest operations that helped bring down Samoza.” Kinzer says the idea that Pastora was then going to make himself available as an anti-Sandinista fighter was thought of as a great coup for the CIA. “They tried to establish him in southern Costa Rica, and at the beginning I think had very high hopes for him. The people who were the main Contra force up in the north, like Bermúdez, were really based in the old National Guard of General Samoza. They hated Pastora, and Pastora hated them.”

The split between Pastora and the Nicaraguan government had come came as many former rank-and-file guerrilla fighters criticized what they saw as an opportunistic power grab by President Daniel Ortega and his closest associates.

Eden Pastora, now 77, says he called the press conference to, “tell the world that I was not joining the counterrevolution, from my stance as a revolutionary, from my stance as a Sandinista.” In 1984, he was at odds with the National Directorate of the Sandinista National Liberation Front. Pastora currently works with the Ortega-led government as Minister of Development of the Rio San Juan Basin.

To date, no group has taken responsibility for the press conference bombing.

Former ABC cameraman Tony Avirgan, who survived the attack launched an investigation together with his wife, journalist Martha Honey to uncover the identity of the bomber. Honey is now the director of the Center for Responsible Travel based in Washington, DC.

“Tony was injured and was operated on in Costa Rica and then taken to a hospital in Philadelphia,” she recalls. “As I was preparing to go up I was contacted by the Committee to Protect Journalists and another press organization and asked if I would be willing to undertake an investigation as to who was responsible for the bombing. And of course I had lots of reasons for wanting to get to the bottom of this, and so I said yes and went up and met with them and thought that this would be a couple of weeks or possibly months of investigation and we would learn what had happened, and literally until today we don’t know the full story.”

A separate investigation eventually determined that the bomber was Vital Roberto Gaguine, an Argentine citizen and Sandinista sympathizer who had entered the press conference on a stolen passport, posing as a Danish journalist to plant the explosive device. Gaguine later died in 1989 in a failed assault on La Tablada barracks in Argentina. An Interpol warrant for his arrest remained open until last Fall when the Argentine government provided Costa Rican authorities with DNA evidence of his death.

Although the bomber has been identified, the intellectual authors of the crime remain unknown. “Especially after the death of Don Roberto Cruz, who fought long to find the truth of these things and fought against the scandalous impunity of the case, I began to turn into an activist for this cause,” says Costa Rican journalist Nelson Murillo. He sees an international trial though the Inter American Court of Human Rights as the the only remaining hope for justice, adding “there is a pending complaint presented by the Association of Journalists, placed in August of 2005 when the case of La Penca already had 21 years of impunity. It has now been 30 years, more than 8 years of waiting and the paperwork is still being processed. They have not yet said yes or no officially.”

Jose Rodolfo Ibarra, also a victim of the La Penca bombing, is now president of the Journalist’s Association of Costa Rica. He feels it is very important to keep the memory of that day alive: “I would hope that this 30th of May, the 30th anniversary of that act, that the new generation of journalists do not forget what happened there. We have to learn from what happened there. May they not forget the dead and the injured. It’s necessary to be aware of what happened there so that it does not happen again.”