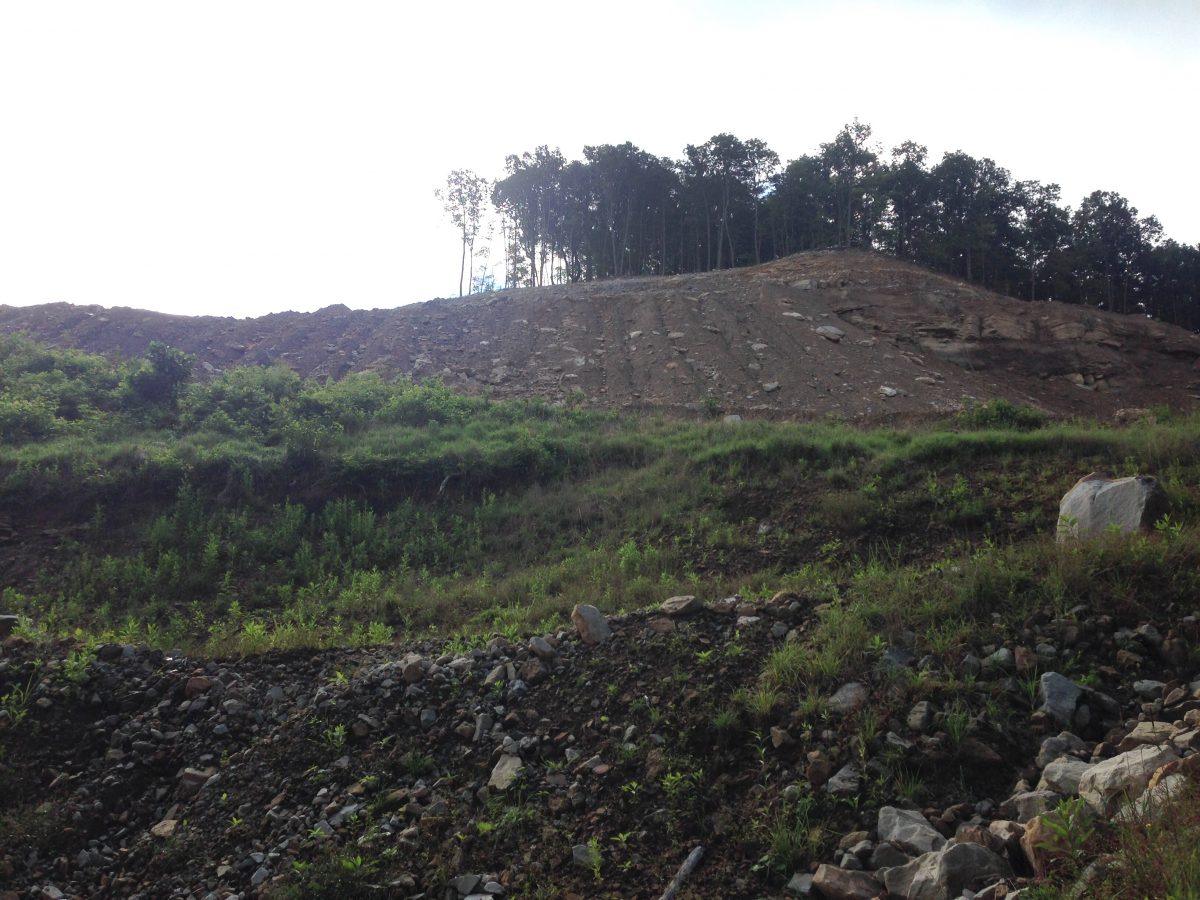 In West Virginia’s coal country, a wellspring of citizen opposition to a mountaintop removal mine has caused the state to put the brakes on the entire operation. As FSRN’s Melinda Tuhus reports, residents say they hope this will set a precedent against the environmentally destructive technique.

On a recent hike up a mountain ridge in West Virginia’s coal country, the lower elevations are awash with wildflowers, butterflies and other wildlife. But upwards toward a former blasting site, the plateau opens up to a contaminated wasteland.

That’s the legacy of mountaintop removal mining. It’s the process by which a mining operation literally blows off the top of a mountain ridge to extract the coal seams beneath. Debris is often dumped into the valleys below, smothering miles of streams.

This is coal country. An old axiom is that the West Virginia’s Department of Environmental Protection – known here as D.E.P. – has rarely met a mountaintop coal removal operation it doesn’t like. And it’s D.E.P. which historically has rubber-stamped these kinds of destructive operations.

But that’s starting to change – thanks to organized opposition from a citizens group that challenged a nearby mine less than 600 feet from Kanawha State Forest.

“I got tired of feeling like my state government and the West Virginia DEP was telling me that our lives were the cost of doing business in West Virginia, and that was okay. I disagree,” says Daile Rois, the nearest neighbor to this idle coal mine.

She says when Florida-based Keystone Industries applied to start mining here, she asked reasonable questions about impact on her home’s well water which she and her family drink every day. But she got nowhere.

“They had an opportunity to say, ‘Hey, here’s this coal mine that’s under this bright spotlight; we’re going to show them how to do it right,’ and they absolutely did not,” Rois says.

The D.E.P. had approved this mine, called Keystone Development #2, and coal extraction began in early 2014. But concerned citizens like Rois banded together to create the Kanawha Forest Coalition.

Keystone Industries filed data with the state D.E.P. showing there would be no harm to surrounding streams or aquifers. But Chad Cordell of the Kanawha Forest Coalition said citizens gathered their own field data to refute the mining company’s filings.

One of the assumptions that was made in the application for this permit, where the company had to come out and survey and certify the amount of groundwater and the location of groundwater sources and springs and seeps on the mountain, and they claimed on their application that there were none on the entire mountain, which is just false,” Cordell explains. “There are springs all over this mountain.”

Cordell said coalition members gathered their own field data to refute the mining company’s filings. They tested the water sources’ conductivity and the pH to measure acidity, both indicators of stream health. They also took photos of streams clouded by sediment from mine runoff. It was this evidence, sent to the D.E.P. over many months, that convinced the agency to temporarily halt operations more than a year ago.

Coalition member Jim Waggy said the D.E.P. appeared set to ignore the mine’s harmful impacts before the citizens got involved: “D.E.P. in this case had abundant evidence that granting this permit would produce uncontrolled acid mine drainage, but they went ahead and issued the permit anyway. Once this problem of acid drainage is established, it’s difficult to impossible to correct this problem.”

Faced with overwhelming evidence, the D.E.P. did something unprecedented: it permanently closed the mine and ordered the company to repair damage already inflicted from past operations over the next nine months. The coalition was able to save three-quarters of what had been permitted for blasting and coal removal.

Critics say past efforts at economic development on former mining sites have almost all failed, and companies’ claims that they will restore the forest are rarely successful.

That’s worrying as this Appalachian hardwood forestland is one of the most diverse ecosystems in the temperate world. Many of these plant species won’t recover. From the view along summit, it looks like the ridge-line got a partial haircut: it’s bare on one side and forested on the other.

But there’s optimism here, as citizens say they’re glad the D.E.P. is finally enforcing its own rules. And that leaves hope that the Keystone Development #2 mine will set a strong precedent for the future.