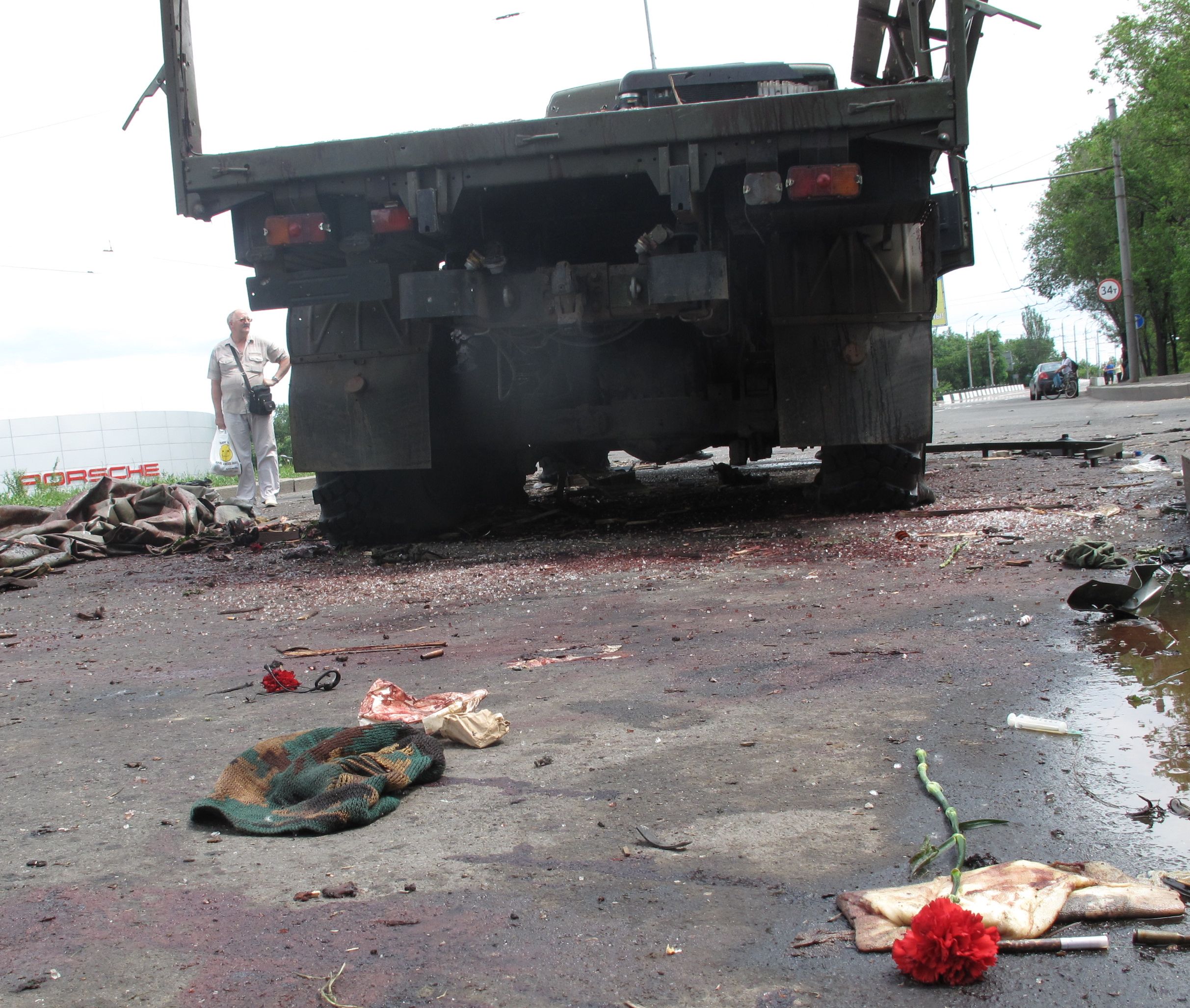 A red carnation is left amidst shell casings, broken glass and human remains following a pre-dawn attack on a separatist vehicle by a Ukrainian helicopter gunship. (Jacob Resneck/FSRN)

Billionaire Petro Poroshenko gained more than 50 percent of the vote eliminating the need for a second round of voting. But the elections were disrupted by armed separatists in Ukraine’s restive eastern regions following an unrecognized referendum earlier this month as the country slides further toward civil war. FSRN’s Jacob Resneck reports.

Since armed separatists ousted the regional government to proclaim the Donetsk People’s Republic in April, the international airport had been an island of central government control.

So when armed separatists shut down local polling stations, the central government announced it would facilitate voting in the terminal under the watch of Kiev-loyal police.

“The school’s doors have been sealed since yesterday. Even the students weren’t able to get inside,” said 57-year-old Tamara, adding that her local polling place, an elementary school, had been shut down by separatists.

But it wasn’t to be. Fearing armed clashes inside the passenger terminal, the election authorities canceled voting at the last minute and Tamara and others were turned away.

“It’s important for us because it’s the future of our country,” said a disappointed Stacy Rud from Donetsk. She hoped to have a say, adding “It’s very important because we make something for our future, to make it better.

Would-be voters weren’t the only ones frustrated. In the corner of the terminal, six election observers from the Florida-based Committee for Open Democracy were waiting to leave on the next flight out of Donetsk. According to 45-year-old election observer John Mraz of Toronto, the team couldn’t find a single polling station open in the city and decided to leave the region after being threatened earlier in the day.

“At the second polling station that we checked we were met at, say 25 yards, by a group of about 20 separatists, all armed including one with a pistol another one with an AK slung over his back,” he described. “The young separatist pointed his pistol at our vehicle – we backed out and left that area.”

At another polling station in the suburb of Andreevka, 40-year-old Eugeniy Sulepen claimed that 90 percent of the town had voted to secede as part of the Donetsk People’s Republic. So he saw no reason for people to vote in Ukraine’s election.

“I see a real risk for war,” he warned. “The situation is getting out of control. It’s chaotic, there’s no security and the ordinary people will ultimately suffer.”

The Ukrainian military response was furious. Helicopter gunships and warplanes pounded separatists in air strikes and landed troops. Poroshenko vowed the operation would last hours, not months, but 24-hours after the fighting began gunfire could still be heard from inside the airport.

Separatists continue to fight back. Early Tuesday a semi truck laden with wounded fighters was struck by a helicopter gunship. The bodies had been removed by midday but the carnage was evident with shattered equipment, bone fragments and flesh scattered across the roadway. Separatists claim more than 50 of their fighters had been killed in what was the worst violence Ukraine has seen since the crisis began early this year. But they haven’t given up. The leadership has appealed for Russian intervention as fighters erect checkpoints using heavy dump trucks loaded with sand and masked gunmen stand by with rows of beer bottles filled with gasoline – molotov cocktails – in case the Ukrainian troops in the airport try to move into the city center.

In anticipation of more wounded, a call went out this week for blood donors across the city and hundreds flocked to blood banks.

“We didn’t have enough time to process all the people who wanted to donate blood because we need time to screen and process it,” explained Julia, a 36-year-old volunteer who said they were forced to turn people away but pleaded with volunteers to return the next day. “Tomorrow starting at 8 o’clock we’ll again be asking people to come and donate blood.”

Until this week life in Donetsk – a bustling city of 1 million people – had been pretty normal. The Donetsk People’s Republic was a movement that occupied a few buildings but until now hadn’t disrupted normal life. But now it’s much more somber. A church procession of Orthodox faithful parades past as dusk falls and people hurry off the streets.

Many people here say they are terrified at the the prospect of street fighting, fearing urban combat between heavily armed separatists and the Ukrainian military, as the threat of outright civil war looms closer than ever in Ukraine’s restive east. 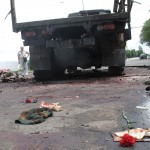 A red carnation is left amidst shell casings, broken glass and human remains following a pre-dawn attack on a separatist vehicle by a Ukrainian helicopter gunship. (Jacob Resneck/FSRN) 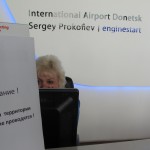 yes there is no voting: A posted notice at the Information Desk states that voting had been canceled at the central government-controlled Donetsk International Airport. Many citizens had flocked to the terminal Sunday to vote after separatists used threats and intimidation to keep city polling places from operating in the city of Donetsk. (Jacob Resneck/FSRN) 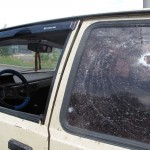 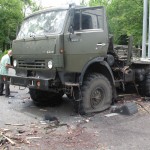 destroyed: Local residents inspect the remains of a separatist vehicle that completely destroyed early Tuesday in a dawn attack by a Ukrainian helicopter gunship. (Jacob Resneck/FSRN)