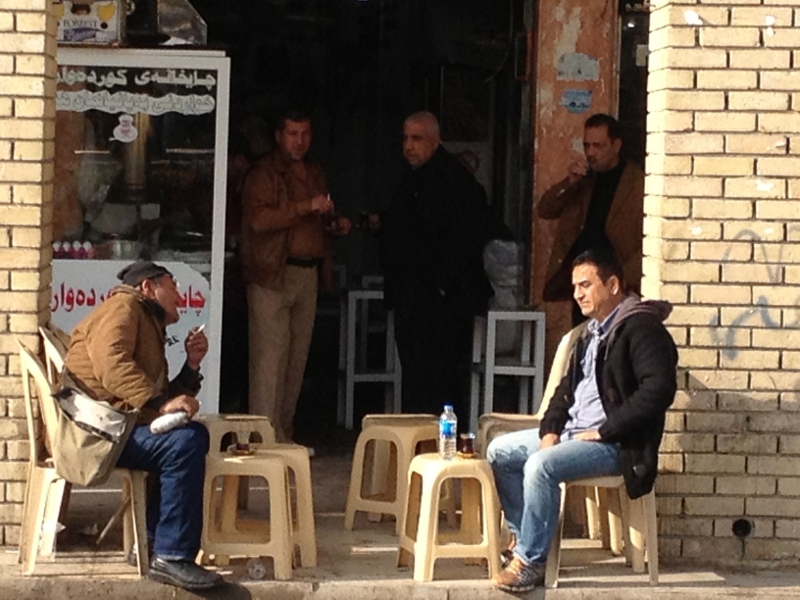 Since the Syrian conflict began in 2011, almost 150,000 people have lost their lives and two and a half million people have sought refuge outside the country. Of that number, close to 225,000 Syrians have fled to neighboring Iraqi Kurdistan. The Kurdistan regional government has set up several refugee camps across the region but the UNHCR estimates that 60 percent of refugees prefer to live in the cities where they can look for work. The local community initially welcomed their neighbors with open arms, but three years on, tensions are emerging. Hermione Gee reports from Erbil.

Construction is booming in Erbil, the capital of the autonomous Iraqi Kurdistan region – a safe haven amidst the violence engulfing the rest of the country and the Middle East’s latest success story.

But for many locals, the economic upswing does not mean more work or better wages. explains Sardar Mohammed, a site manager at a big construction project on the outskirts of the city.

“Since the problems began in Syria, we have a lot of Syrian workers,” says Sardar Mohammed, a site manager at a big construction project on the outskirts of the city. He estimates about half of his workers are from Syria.

Syrians will work for lower wages, and that’s forced pay rates down for everyone. Day laborers used to get around 40 dollars a day but now they only earn about 20.

Despite the adverse effect on wages, Mohammed says Iraq’s Kurds are happy to help the refugees. “As a Kurdish nation we have been oppressed everywhere – here, in Turkey, in Syria,” he explains. “It’s true that we’re losing money but we have to help them because we’re all Kurdish.”

While many people in the region share this sentiment, some refugees feel that local employers are taking advantage of their desperate situation.

“For us, when we look for job in Kurdistan, that’s big problem for us,” says 21-year-old Yalmaz Hanan, who came to Kurdistan a year ago to earn money to support his family back in Aleppo. “You’ve got half salary and more hour for work. And, maybe your abilities is better than your work; maybe you work in restaurant, or building, but maybe you doctor.” Before leaving Syria Hanan was at university, studying translation. He now works in a coffee shop in Erbil.

Local workers aren’t happy either. “I haven’t worked for one month,” says Omar Mohammed, a tiler and bricklayer from Erbil. “Since the Syrians are here, the situation has changed for us. What we do, they do for half price.”

Mohammed comes to a small tea house on the edge of the city’s main bazaar to find work. He and his fellow construction workers pass the time drinking tea and talking as they wait for a job. Traditionally, site managers visit the tea house to hire workers for their projects, but Mohammed says the Syrians are now directly approaching the managers.

The change in the workforce is affecting everyone. “I sell cigarettes here at the bazaar,” says Anuwar Ali, who’s also at the teahouse today. “Before, we were only two cigarette sellers on this street. Now there are ten. My life was very good and I could pay my rent and my bills and even save some money; but now I can’t manage and I’m in debt. They’ve made chaos for us everywhere; they’ve mixed everything up.”

“People are open-hearted and they want to help but the government shouldn’t let the refugees out of the camps,” says Adnan Yousef, another man in the cafe. “They should build a fence and say you can’t cross this, just stay in the camp.”

But, explains Khider Domle, a journalist and minority-rights activist, the Kurdistan Regional Government, or KRG, is looking ahead to the day when the Syrians return home and are no longer refugees but neighbors and potential political allies ruling their own autonomous Kurdish region in Syria.

“The KRG, they looking for future – if they deal in a good way with those people, they will be a bridge with the Kurdish people in the north of Syria in the future,” says Domle. “I think the KRG should deal in a very careful way with this case. They should be very careful, they should train them, educate them, find a school, a workshop, a seminar and also educate the local society about the refugee rights and how those people are very important for us for the future.”

Shokr Yaseen, the head of Erbil’s Bureau for Migration and Displacement, recognizes that there are problems but says it’s important that the Iraqi Kurds treat the Syrians well while they’re here. “It’s true that our policy has not been 100% successful but we are looking at them as temporary residents here,” he explains. “We have respected them and we have given them freedom; when the situation improves we will respectfully let them go home.”

Back at the tea house, Anuwar Ali is philosophical. “If the situation in Syria changes and the refugees go home, it will be better for us,” he says. “But while they’re here, they also want a life and want to earn money, so it’s not possible to keep them in the camp. In Kurdish we say, if someone knocks at your door, you have to let them in. There’s no other option – they’re our guests.”

With no end to the conflict in sight, those guests are likely to remain in Kurdistan, welcome or otherwise, for many months – if not years – to come.