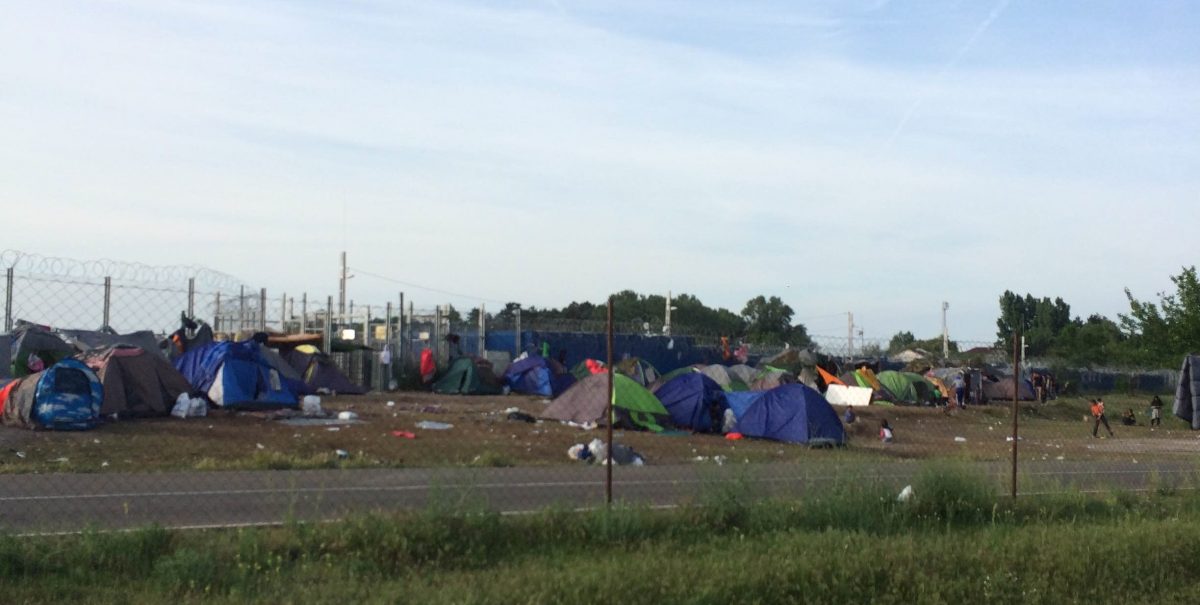 A tent camp on the Serbian side of the border with Hungary. (Photo credit: Andrew Connelly)

Hundreds are drowning off the coast of Italy on a weekly basis, Greek police are dismantling refugee settlements and smuggling routes into Hungary are skyrocketing. Europe’s refugee crisis hasn’t gone away, if anything it has become more complex and diffuse.  Andrew Connelly reports from Subotica, Serbia.

“Thus far, 2016 is proving to be particularly deadly. Some 2,510 lives have been lost so far,” said spokesman for the United Nations refugee agency William Spindler, speaking on Tuesday from Geneva. Europe’s Mediterranean Sea is a mass grave and in the last two weeks, the International Organization for Migration estimates that more than 1,000 people have perished trying to reach Italy from North Africa.

But who are they? A popular belief holds that the combination of border closures in Europe and the EU-Turkey deal has forced Middle Eastern refugees to take more dangerous routes from North Africa to Italy, but the statistics prove otherwise.

According to the United Nations refugee agency, the UNHCR, the top three nationalities crossing the Mediterranean from Libya are Nigerians, Somalis and Gambians, not Syrians, Iraqis and Afghans, who mainly used the route from Turkey to the Greek islands. The combination of new visa restrictions preventing Syrians flying to Libya and Algeria, and the presence of the Islamic State group in the region, is putting them off.

So, for now at least, their route has not changed, and the push factors remain, says UNHCR spokesperson William Spindler.

“Whether they want to come for economic reasons to Europe or whether they are fleeing war and persecution, there is no other legal alternative open to them,” Spindler explains. “This argument that more people will take the crossing in the hope that they will be saved. In our view it’s wrong. People are desperate, they will take to the sea whatever the risk. If we stop saving them, more people will die, that will be the only consequence.”

Last week, Greek authorities cleared and shut down Europe’s largest informal refugee settlement, near Idomeni on the Greek-Macedonian border. At its peak, the muddy field was home to more than 15,000 refugees who’d been living in a state of limbo ever since the closure of the Balkan route in March.

Under a mechanism agreed to by the EU, 160,000 refugees already in Greece and Italy are supposed to be safely relocated across the 28 member states. But in practice, the agreement has progressed at a glacial pace, so far moving barely more than 1,000 people in nine months.

So what happened to Idomeni’s former residents? That remains unclear, says Katy Athersuch of the medical NGO Médecins Sans Frontières, who was working at the camp. Idomeni was full of parents separated from their partners or children beyond the border, and Athersuch says the refugees weren’t given any information about where they were headed or what they would find there after the evacuation.

“And then, second of all, what has been really upsetting about the whole thing is that when these people have been moved, some of them we know have been moved to camps that are unacceptably poor in terms of their conditions, in terms of the water and sanitation provision and the hygiene, and that in itself is incredibly unacceptable,” Athersuch points out. “It didn’t need to happen that way. There was time to plan.”

Half of the remaining 8,000 at Idomeni just spread out to improvised campsites on the forecourts of nearby gas stations and hotels. Those with some money left found a way to slip through the cracks’ of Europe’s fortifications.

Just because European leaders say the Balkan Route is closed, does not make it so. Three hundred miles north of Idomeni, volunteers in the Serbian capital Belgrade are reporting between one and two hundred new refugees arrive each day, their passage facilitated by human smugglers through either Macedonia or Bulgaria. From Belgrade their journey continues north to the Hungarian border, where a small tent village has sprung up in the village of Kelebija, where Hungary permits a handful of families to enter each day, a process that may take weeks.

Single men are far less likely to be accepted by Hungary, so the quicker, and far more popular route for them, is to hire a smuggler who for around $150 will cut a hole somewhere along Hungary’s 110 miles barbed wire fence at night. However, this is far from risk-free. A growing collection of testimonies by refugees allege abusive treatment by the Hungarian police.
Ali is a twenty-five year old dentist from Afghanistan who, hoping to reach his parents in Germany, had tried to enter Hungary with a smuggler. Ali claims he and his friends were assaulted and sprayed with chemicals by the Hungarian border guards, who then pushed them back to Serbia through the hole in which they entered.

“We didn’t hear something like this before. The smugglers didn’t describe anything like that to us, they just said when you cross the fence, you should run for a hundred meters, but we ran for five miles, then we were pushed back to Serbian lands and hitting,” Ali recalls. “It was a very small hole we couldn’t see, they were pushing and kicking us and hitting with the batons.”

The Hungarian police claim to have apprehended more than 12,000 refugees who breached the fence so far this year. Once detained, some are put on trial or in detention, the lucky ones are taken to open camps from where, under the turned heads of the authorities, they can continue their journey through to neighboring Austria.

In many ways, the Serbian-Hungarian border has become a metaphor for the EU’s wider refugee policy failure. Faced with ever-diminishing safe and legal routes into Europe, the illegal and risky, clandestine options – by land or by sea – seem like the only hope for most people, even as the casualties and deaths continue to rise.