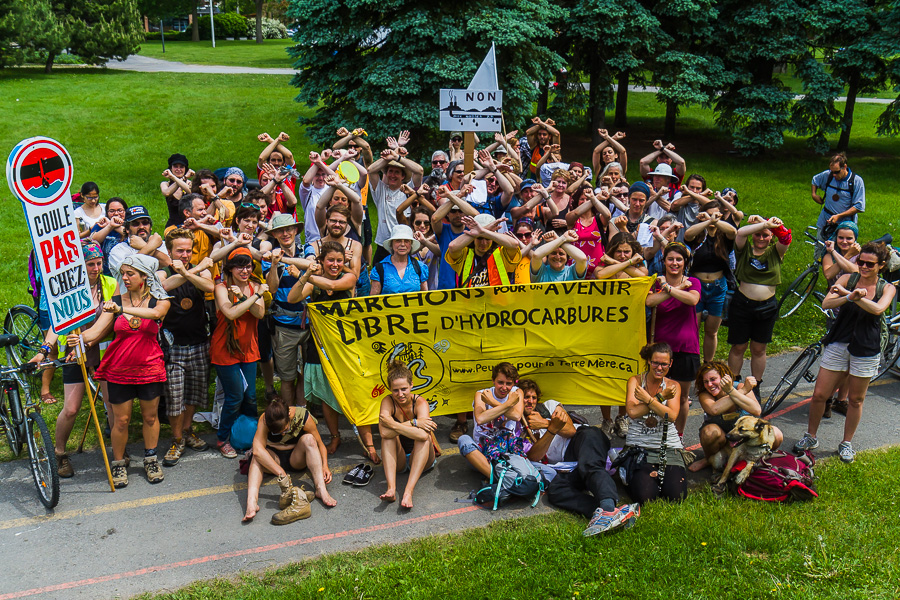 Group picture of the marchers in a park as they leave Montreal, on June 8th, 2014.

For the past month, a group of activists has been marching across Québec, protesting pipelines, tar sands extraction, and what they call “unsustainable development.” Two pipelines in particular have drawn their criticism: Energy East, a TransCanada project, and Enbridge’s Line 9B. Both would drive the expansion of tar sands projects in Alberta and prioritize the transportation of fossil fuels for export. FSRN’s Carla Green has more.

A couple dozen environmental activists are due to arrive at a Mohawk reserve near Montreal Friday afternoon after marching more than 430 miles on foot from Northern Quebec to protest the expansion of pipelines to transport tar sands oil.

The People’s March for Mother Earth, as it’s called, has been following the path of two controversial pipelines.

The first, TransCanada’s Energy East pipeline proposal, involves the construction of nearly 1,000 miles of new pipeline to transport close to 1,000,000 barrels of crude oil a day. The project also calls for building an export terminal at Cacouna, where the march began.

The second, Line 9B, currently carries foreign, imported oil west. Enbridge, which owns the pipeline, has proposed reversing the flow in order to carry Albertan oil east for export.

“If we’re able to block all major pipelines that are wanting to export this oil,” says march organizer Alyssa Symons-Bélanger , “then you’re also blocking the expansion of the tar sands.”

The march passed through thirty three towns –  one each night – all in the path of proposed pipeline construction.  Kanehsatake – the Mohawk reserve where the march ends – was chosen as the final destination in recognition of the leadership role Canada’s First Nations have played in the fight against resource extraction.

Melissa Mollen Dupuis is an Innu activist who has been a driving force behind Idle No More Québec. She says controversial resource extraction projects are often characterized by environmental racism.

Marchers performed “petition duty” along the route of their walk – talking to passersby about the pipeline projects and asking them to sign a petition. Sometimes they ran into opposing viewpoints.

“If I sign this, there won’t be a pipeline coming from Alberta, but it’ll come from somewhere else. No,” responds  Laval resident Sabrina Belkacem. “That’s what’s causing all the wars in the Middle East and in Africa. That’s why I won’t sign.”

Belkacem ended up signing the petition after marchers pointed out the pipelines are to transport oil for export, not domestic consumption. They thanked each other, and went their separate ways.

The energy of the marchers is undeniable, but their success seems unlikely. Canada’s National Energy Board has already approved the reversal of Enbridge’s Line 9B and many expect the same for Energy East. But activist Symons-Bélanger said it’s important to voice opposition in numbers.

After the marchers reach Kanehsatake, a smaller contingent will keep going to Ottawa – another week’s walk.

Although extracting oil from Alberta’s tar sands is controversial due to the amount of pollution it produces, the oil boom it’s fueled shows no immediate sign of slowing. Canada is now the top supplier of crude oil to the U.S. market.
View a slide show of photographs taken of the march in Montreal (Photo Credit: Robin Dianoux)
————————————————————————-