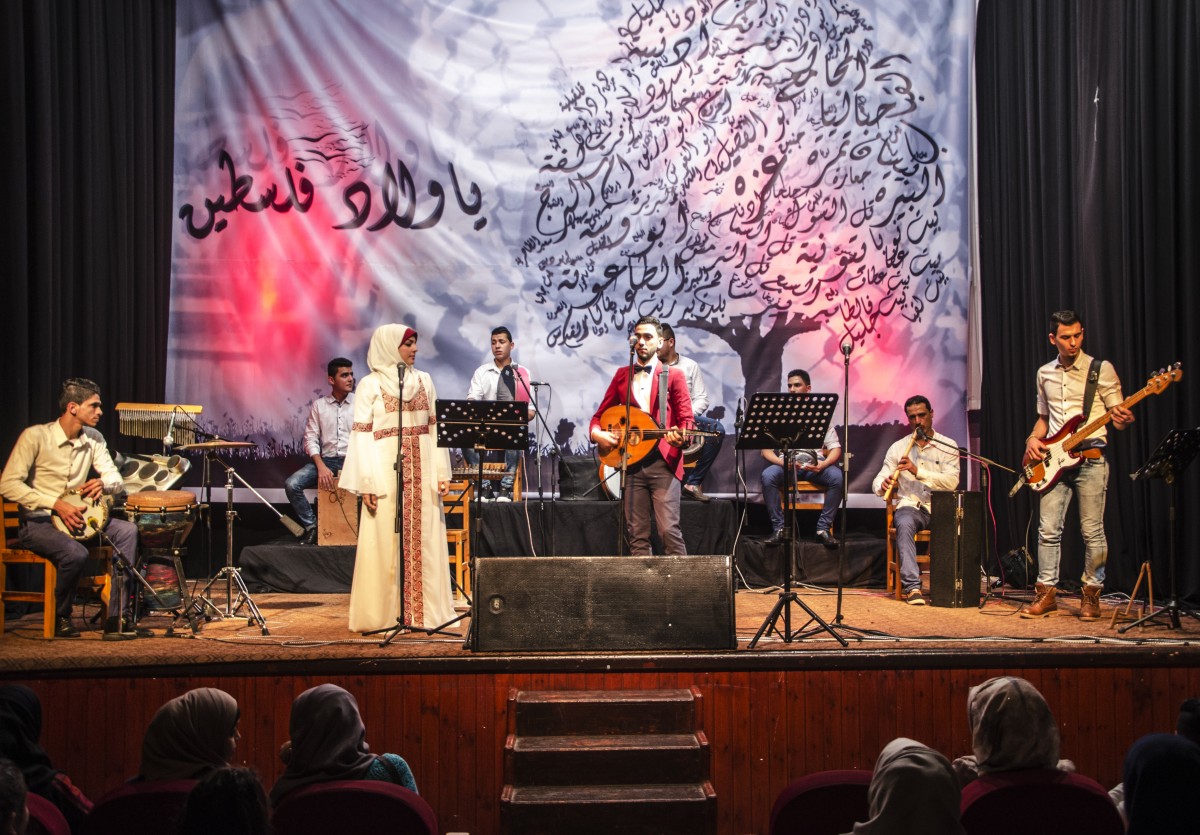 It’s been a decade since Western powers placed economic sanctions on the Gaza Strip after a Hamas in Palestinian parliamentary elections. Shortly after Hamas took power in March of 2006, the U.S., EU and Canada cut aid to the Palestinian Authority causing a deep factional rift between Palestinian parties Hamas and Fatah. Israel followed suit in 2007 with a total blockade of the territory.

The isolation has infused every aspect of life in the Gaza Strip, including its music scene. But a new band has started performing across the region, aiming to keep traditional Palestinian music alive. FSRN’s Rami Almeghari reports from Gaza.

Inside Gaza City’s landmark Al-Mes-hal theater, 24-year-old Rewan Okasha rehearses a traditional rural Palestinian love song titled “I Wish You Were My Soulmate.” The folk song is one of many the band called Dawaween has updated with modern elements since it began performing about four months ago.

Okasha says she’s been singing since she was three, but never in public until her performances with Dawaween. Preserving Palestinian musical traditions runs in her family. Her father is a famous Gaza musician and two of her brothers are well-known local singers.

“Palestine can be happy and Palestine’s cultural heritage is filled with joy that could be shared with the outside world,” Okasha says.

Ten musicians and two other singers, both male, make up the 13-member band, including 23-year-old Abdelraouf Albelbeisy.

“As local musicians, we often hold wedding parties as a part of our culture,” says Albelbeisy. “But these parties don’t necessarily involve the traditional Palestinian songs that we perform.”

The experienced lute player and singer explains why it’s important to him to keep these traditional songs alive: “I am a Palestinian who has been raised in a folk culture context that includes, for example, eating a traditional fire stove bread. I’m drawn to these traditional Palestinian songs that refer to our cultural items.”

The band’s Egyptian-Palestinian manager, Adel Abdelrahman, says Dawaween is a volunteer effort and receives limited financial support from an Egyptian cultural association. They have gotten sponsorship offers, but turn them down in order to remain independent of any politically-affiliated groups.

“We have received offers of huge financial support, by various partisan groups,” Abdelrahman points out. “We have rejected them all, even though we’re broke.”

Years of border blockades and heavy restrictions on travel and trade to and from Gaza have affected nearly every aspect of life here, and that includes even simple cultural activities taken for granted in other parts of the world.

The thirst for live music was evident at the band’s most recent concert. Gaza City resident Majdy Abu Amer attended the performance, along with two of his friends.

“This music projects a real message from Gaza, that Gaza is not only a place of bombing and destruction. We, the people of Gaza, are as normal as many others in the world,” Amer explains. “We listen to music, we love and watch movies.”

Live music performances like Dawaween’s concert are rare occurrences in the Gaza Strip, ever since the 2007 start of the Israeli blockade of the coastal territory. Three major Israeli military offensives targeting Gaza since then have only increased the hardships that are now part of everyday life here.

For theater director Jamal Abuelqumsan, keeping Palestinian music and culture alive is vital for the nearly 2 million people here who are largely isolated from the rest of the world.

“Music in itself is considered a different form of resistance,” says Abuelqumsan. “I think that music helps people be more patient and tolerant towards life and it enables them to enjoy some time out.”

Dawaween is set to hold a concert once a month and looks forward to expanding its activity far and wide in the coastal territory. Tours overseas, however, seem unlikely given the travel restrictions that come with being a resident of the Gaza Strip.