U.S. high court convenes for Fall term – a look at the docket 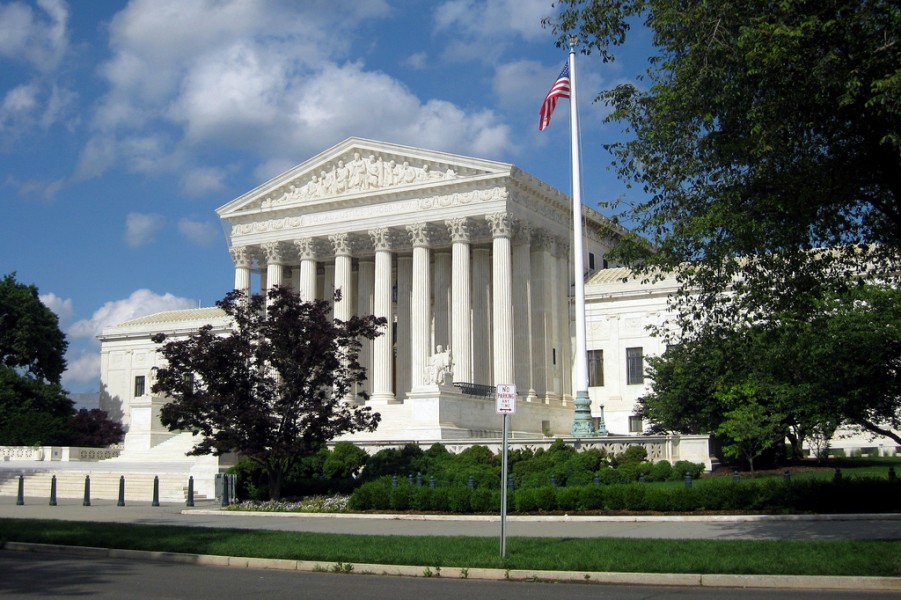 The U.S. Supreme Court begins its next session on October 6. While no “blockbuster” cases like last session’s Burwell v. Hobby Lobby are expected, decisions involving free speech, exercise of religion and the 14th Amendment are on the court’s docket.  Ashley Westerman reports from Washington, DC.

With hot-button issues like marriage equality and health insurance subsidies under the Affordable Care Act on the horizon — but not on the high court docket just yet –legal analysts are projecting a lackluster Supreme Court session this fall.

“A preliminary comment on this term, as you look at the granted cases, I’m sure you’re aware there are some interesting cases but nothing of earth-shattering importance,” Gorgetown University law professor Irv Gornstein said at the school’s Supreme Court briefing Tuesday.

But that doesn’t mean the justices won’t still be weighing in on some important and far-reaching issues.

For example, Facebook posts are the center of this fall’s biggest First Amendment case, which seeks to answer the question: should violent statements made on social media be considered real threats?

A Pennsylvania man convicted of threatening his ex-wife and a police officer via violent Facebook posts, argues he was just exercising free speech to emotionally vent – like rap stars writing lyrics. Elonis v. United States asks what the government must prove to convict someone of making a threat – actual intent, or reasonable expectation of perceived intent?

Georgetown professor Martin Lederman says the issue of free speech on internet in this case should give the justices pause.

“About how should Facebook postings, how do they, how are they perceived by their audience or audiences?” posits Lederman. “Right, there’s many different audiences. I’m not sure the court wants to create a jurisprudence of Facebook yet, so I’m sure they’ll be very cautious.”

Another First Amendment case due this term deals with the Religious Land Use and Institutionalized Persons Act, which gives inmates religious rights. The law is much the same as the Religious Freedom Restoration Act, which Hobby Lobby cited last session to justify opting out of covering their employees’ birth control under the Affordable Care Act.

Hobbs v. Holt involves a Muslim man in an Arkansas prison who is fighting to grow a half-inch beard as per his religion. But the prison maintains a strict beard ban. They argue beards can hide contraband and escaped inmates can shave them to change their appearance.

Panelist and attorney Hashim Mooppan says the prison wants the right to act preemptively, even with little proof their policies are plausible. Mooppan predicts the inmate will win this one but says how the high court explains exceptions to the beard ban will be key. He says exceptions were the basis of Hobby Lobby’s argument and the standard argument used by churches to build their cases against the Affordable Care Act’s requirement to cover contraceptives in their employer health insurance plans.

“Saying that, look, there are a whole host of exceptions to the contraception mandate so therefor you couldn’t possibly have a compelling interest in denying us one,” Mooppan points out. “So what the court says about things like that could have spillover effects in other cases.”

Another anticipated case that legal analysts say is still hard to predict, is Heien v. North Carolina. This case will determine if a police officer’s mistake of law fulfills the suspicion required by the Fourth Amendment to justify a traffic stop, and search and seizure.

The petitioner, Heien, was pulled over by an officer who mistakenly thought North Carolina law required two working brake lights. During the stop, cocaine was discovered in the car and Heien was charged with drug trafficking. He appealed his conviction, arguing that the discovery of the cocaine was the result of an unlawful stop.

Mooppan says it’s interesting the high court picked this case up, because a lot of people would assume Heien has a pretty strong case.

“But the government’s brief actually pulls out a lot of history from the founding era where there are a variety of different statutes that seem to, essentially, deem reasonable this sort of conduct in certain situations,” he explains. “And they’re trying to say those statutes shed light on the reasonableness for the Fourth Amendment.”

The Fall term will be another busy one at the court. Justices will also hear arguments on racial redistricting in Alabama, states’ rights to tax residents’ income and whether tossing red grouper overboard to avoid a federal conviction is comparable to Enron shredding documents.