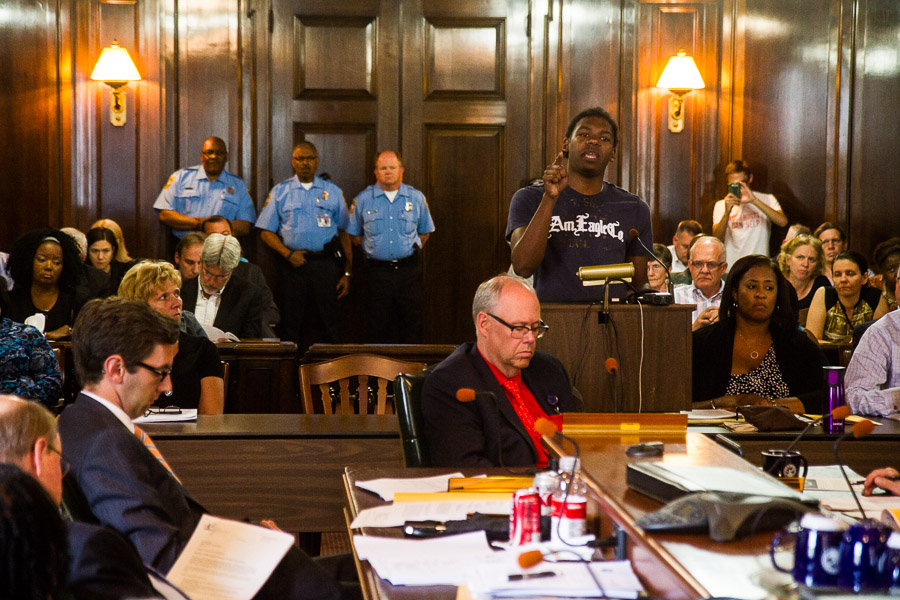 Demeeko Williams advocates a change of policy at the water board meeting.

The city of Detroit is cutting off water services to thousands of residents who are overdue on their bills. The move is just one of several austerity measures implemented in Detroit since an emergency manager took over the bankrupt city last year. An uproar over the issue has spread beyond Detroit, and some advocates say the shut-offs constitute a violation of human rights. Carla Green has more.

Photo Essay
The United Nations’ human rights office has expressed concern about widespread water shut-offs in the city of Detroit, stating that “disconnection of water services because of failure to pay due to lack of means constitutes a violation of the human right to water and other international human rights.”

The shut-offs are part of an attempt by the Detroit Water and Sewerage Department, or the DWSD, to collect an estimated 175 million dollars in unpaid water bills.

DWSD spokesperson Greg Eno disputes the idea that residents are unable to pay, saying the United Nations was “pulled into this, because it’s being portrayed as a violation of human rights, and activists are saying that water is a basic human right – I find it interesting that – if water’s so important – and it is, water is important, obviously, why are certain bills being paid and ours is not?”

Local media reports about half of Detroit’s population is behind on water bills, and the DWSD has been cutting water for up to 3,000 households per week since the program began this Spring. The plan targets any households with at least two months’ of unpaid water bills adding up to 150 dollars or more.

Some residents believe that this is a prelude to the privatization of the city’s water utility. Since last year’s appointment of Kevyn Orr as Detroit’s emergency manager, city services including garbage collection and public lighting have been sold off. Orr is considering the same course of action for the DWSD, says Eno, but not everyone at the department is on board with the offers on the table.

Detroit activists are fighting the shut-offs on several fronts. Aside from the UN appeal, they’ve also been organizing weekly gatherings – called ‘Freedom Fridays’ – in front of DWSD headquarters. A coalition called the Detroit Water Brigade is filing an injunction to stop the shut-offs, and plans for a class-action lawsuit are underway.

Roslyn Walker would be one of the main plaintiffs in the lawsuit. She owes almost 900 dollars to the DWSD, but has an income of about 600/month. Walker’s son has asthma and the nebulizer that could save his life in the event of an asthma attack needs water to work.

Walker says she had recently notified the DWSD of when to expect the next installment of her payment plan when they came to shut off her water. “So I told the man, I said, they knew that I was coming on Friday and today is Thursday. And I said I didn’t get a shut-off notice. He said ‘you don’t get a shut-off notice no more, if you haven’t paid your bill in two months, they come and shut it off.’ That’s wrong.”

The next day, she had to miss work to borrow the 300 dollars necessary to keep her water on.

The DWSD calls its shut-off plan a success, citing the sixty percent of people who pay their bill within 24 hours of disconnection. The department collects an additional fee for turning water back on. The DWSD has trumpeted several programs in existence to help people pay their water bills, including the payment plan that Walker was on, and a non-profit called WAVE.

At a DWSD public meeting Wednesday, activists and residents lined up to speak before department commissioners and the crowd, some on the verge of tears as they denounced the shut-offs.

When Detroit activist Ann Rall stood up, she disputed the very availability of such programs. “I was told, two weeks ago, by an employee of DWSD, that there was no money in the WAVE program,” said Rall. “There is no money to help people. You have been cutting people off since April, and you are just now getting around to raising money for the WAVE program.”

Although Detroit is one of the poorest cities in the US, average water bills there are almost double the national average. The average bill in Detroit will come in at over 70 dollars a month after a recent 8 percent hike, compared to about 40 dollars/month elsewhere in the US.

Demeeko Williams is a member of the Detroit Water Brigade. He says that the DWSD should go after corporations for the money they owe, not individuals. “Big businessmen such as Mike Ilitch; he’s one of our local billionaires here in Detroit. The VA hospital owes so much money. The bad debt that’s from the corporations is being levied on the people here. The innocent Detroiters should not have to have their water shut off because of whatever situations they’re going through.”

But Eno claimed that the two issues couldn’t be compared, that the corporations were disputing the bills – and that in any case, they weren’t about to cut off their water. “The dispute isn’t about water usage, it’s about storm water run-off and it’s not the same thing,” says Eno. “If they were – it’s not the same thing. That’s what it boils down to. We can’t cut water off based on storm water disputes. It doesn’t make any sense.”

So for now, it seems that only those who owe the DWSD hundreds – and not thousands – of dollars will suffer shut offs of their water services.

The UN statement didn’t specify whether it would be taking any formal action to curb or put a stop to the shut-offs for residents who can’t afford to pay their bills. The Detroit Water Brigade is expected to file its injunction sometime next week.