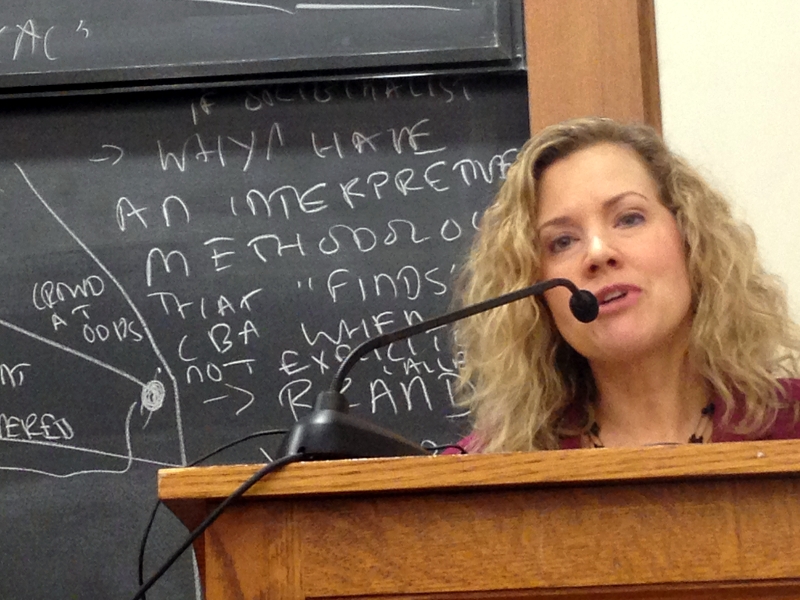 Members of the Senate Intelligence Committee voted this afternoon to declassify parts of a report on CIA interrogation techniques. Even before the vote, the CIA torture report made headlines after revelations that the agency had accessed a restricted network used by Senate staffers to prepare and store the document. Senators who were otherwise tepid in response to revelations of widespread government spying and suspicionless surveillance of the U.S. general public reacted strongly to the invasion of the Senate staff network.

While some hope that alleged spying on Senators will provide an impetus for review and reform of the surveillance powers granted by Congress to the nation’s intelligence agencies, others are looking to the next generation of top lawyers to take on the matter. Earlier this week, the Yale Law School hosted a forum featuring prominent critics of the surveillance program and of government overreach. Melinda Tuhus reports from New Haven

Perhaps one of the biggest revelations to come to widespread public attention as a result of the massive document leak by former NSA contractor Edward Snowden is the extent to which lawmakers have approved measures to make suspicionless surveillance lawful.

Much of the surveillance apparatus has been built up and empowered in secret. Former presidential candidate and long-time public advocacy attorney Ralph Nader says President Barack Obama has continued to wield special executive powers – behavior which became a hallmark of the George W. Bush administration.

Some of the legal decisions upholding the government’s surveillance program are based on a classified interpretation of a section of the Patriot Act. Senate Intelligence Committee member Senator Ron Wyden has repeatedly said that Americans would be stunned to learn the full extent of surveillance powers authorized by this secret interpretation, but he cannot provide concrete details or examples without breaking the law.

Bruce Fein, a high-ranking Justice Department official during the Reagan administration, notes that intelligence officials have been able to get away with lying to Congress during public hearings. “And what about Congress? That’s not an impeachable offense, to lie under oath and mislead the American people?!” he asked, referring to testimony by Obama’s Director of National Intelligence, James Clapper. “No. He’s still serving. We have as our Director of National Intelligence, who’s entrusted with secrets about us, a known perjurer, remains in office, untarnished, public reputation there. Where’s all the newspapers calling for his resignation? Silence.”

Clapper confirmed in a letter sent last week to Senator Wyden that U.S. persons have been targeted by the surveillance program – something he had earlier and categorically denied.

Fein, who also worked under the acting attorney general in the early 1970s to write a paper outlining a rationale for impeachment of President Richard Nixon, says Obama is exercising a dangerous level of executive power without adequate checks. “This president has authority to kill anyone on the planet, to play prosecutor, judge, jury and executioner, if he decides, in secret, that the target of the Predator drone – could be another instrument of death, doesn’t have to be a Predator drone – is an imminent threat to U.S. national security.” Fein added the process “is not subject to review by Congress, it’s not subject to review by courts, it’s not subject to review by the American people. It is limitless.”

The Obama administration has also cracked down on whistleblowers like no other.

Jesselyn Radack leads the national security and human rights branch of the Government Accountability Project, founded in 1975 to protect whistleblowers. She previously worked in the Justice Department in the G.W. Bush administration, but resigned after working on the case of John Walker Lindh, the so-called “American Taliban.” She held a position that the War on Terror could not be used to justify the denial of basic rights – like access to legal counsel – to US citizens. Her superiors disagreed. She also found her emails documenting her position had been mysteriously purged.

“I managed to resurrect more than a dozen emails, including the one documenting the FBI’s ethical misconduct in its interrogation of John Walker Lindh,” said Radack. “I wrote a memo to my boss, and I attached the emails, and made a copy for myself in case they disappeared again, and I gave her the memo, and I resigned. I said I don’t fully what’s going on here but I am not going to be a part of this.” As the audience of future lawyers applauded, she added that her decision was based in following the rule of law without bending them in politically convenient circumstances.

The experience made her a whistleblower, but Radack is adamant that “leaking is not a crime in this country. You have a First Amendment right to go to the press, and what I gave the press was completely unclassified.”

Radack was put on the no-fly list and couldn’t get a job in her field for several years. But she said the experience made her realize she wanted to spend the rest of her life defending whistleblowers. She now serves as legal counsel for Edward Snowden, who is living in Russia under temporary asylum. “It says a lot about democracy that a whistleblower now has to leave the country – that is the safest way to make a disclosure without getting caught up in the legal system – is to leave the country to do so. What does that say about us?”

She said the Snowden case is part of a wider war on information going on in the country, against whistleblowers, journalists, hactivists and others who dissent from the government party line.

The speakers at the Yale Law School forum said they hope to encourage law students to question authority and defend those who stand up for the law in the U.S., even when the highest officials flout it.