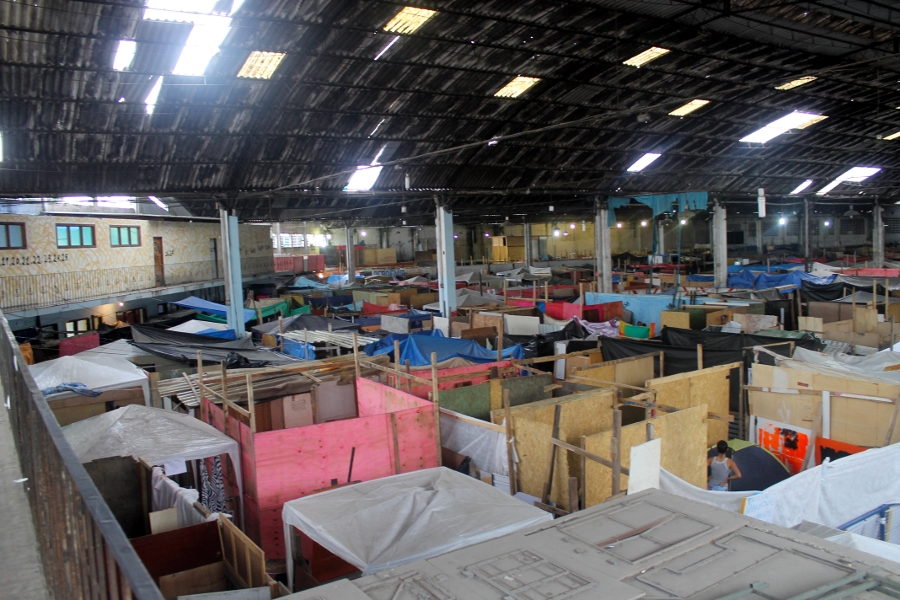 Faced with increasing rents, some favela residents take to squatting. Here in Rio's Northern Zone, around 1500 families have occupied an abandoned factory. The vast majority came after being priced out of the nearby Complexo do Alemão favela.

The 2014 FIFA World Cup kicks off this Thursday in Brazil. However, not all Brazilians will be celebrating. Across the 12 host cities, large numbers of people have been evicted from their homes or priced out due to increased real estate speculation. From Rio de Janeiro, Sam Cowie reports.

Around 170,000 Brazilians will lose their homes due to eviction or real estate speculation related to the World Cup and Olympic Games. Fifty thousand are expected to be displaced in Rio alone. That’s according to the Popular Committee for the World Cup and Olympic Games, an independent body that monitors developments and human rights abuses connected to the international sporting events.

Giselle Tanaka of the Rio Popular Committee says many of the World Cup projects and refurbishment works are unnecessary and primarily benefit large construction businesses connected to the city’s political class.

The Demolition of Favela Metro-Mangueira

Favela Metro-Mangueira was once a bustling, vibrant community. Its proximity to Rio’s downtown meant that residents enjoyed short commutes to work. Just up the road is the world famous Mangueira Samba School. Today, what was once a 700-family strong community lies in ruins.

In late 2010, workers from Rio’s City Hall arrived and began demolishing the neighborhood, house by house. The city government relocated the first 100 displaced residents in units more than 40 miles away.

As human rights groups and the international media caught wind of what was happening, the demolitions slowed. Those that managed to resist eviction were able to claim the better compensation, and obtained housing within city limits.

In 2012, FSRN spoke with longtime Metro resident Eomar Fretais on the porch of his house, which was also marked for demolition. At the time, Fretais was one of three people left on his street. Around him were the half demolished shells of his neighbors’ houses.

“This was a great community; everyone knew everyone, everyone got on well,” said Fretais. “We used to have a community party at the end of the year. Since the demolition started, there’s been nothing like that. Now, I’m forced to stay at home, because if I don’t they might knock it down while I’m away.

The walkways were filled with trash, rubble and twisted metal. He told these conditions brought rats and mosquitos carrying dengue fever. He said that at night, the half demolished shells of his neighbours houses were occupied by crack addicts. He compared the situation to living in Libya or Iraq.

Eomar Freitas was eventually relocated in a public housing block, situated about a mile away.

The stated reasons for the demolition of Metro-Mangueira have changed several times over the years. First, it was going to be a parking lot. Then a parking lot and cultural center. Now, authorities are saying it will become a parking lot and a complex of auto shops. One thing remains sure however: the prime location and value of the land.

Metro-Mangueira sits opposite the Maracana stadium, which will host the World Cup final.

Evandro Makko used to live in a housing complex for indigenous Brazilians based in Rio’s former Indian museum. The building is also very close to Rio’s Maracana stadium.

In March last year, following a long eviction battle, armed police removed Makko and around 30 others from the building and later fired tear gas and stun grenades into a crowd of protesters.

Officials say that they now plan to develop the area as shopping center and parking lot. Makko is now living on Rio’s periphery, about 35 miles from downtown.

“It’s sad, because we love football,” says Makko. “Really, Brazil is considered the country of football. But here, the people don’t want the World Cup, because the Cup is being used as a vehicle by FIFA and the big businesses, to take the people out of their homes, and us indigenous, from our lands and from our ancestry.” He describes the Brazilian World Cup as the ‘cup of exclusion.’”

Rio de Janeiro, is also hosting the 2016 Olympic Games. Another favela community, Vila Autodromo, is currently resisting removals. The community is located next to where the Olympic park will be.

Other favelas that have survived the push for demolition and development in Rio have been occupied by special ‘pacifying’ police units. While drug trade related crimes – particularly homicides – have fallen in these areas, property values have shot up, pricing poor renters out of the market.

This in turn has led to an increase in squatted buildings across Rio.