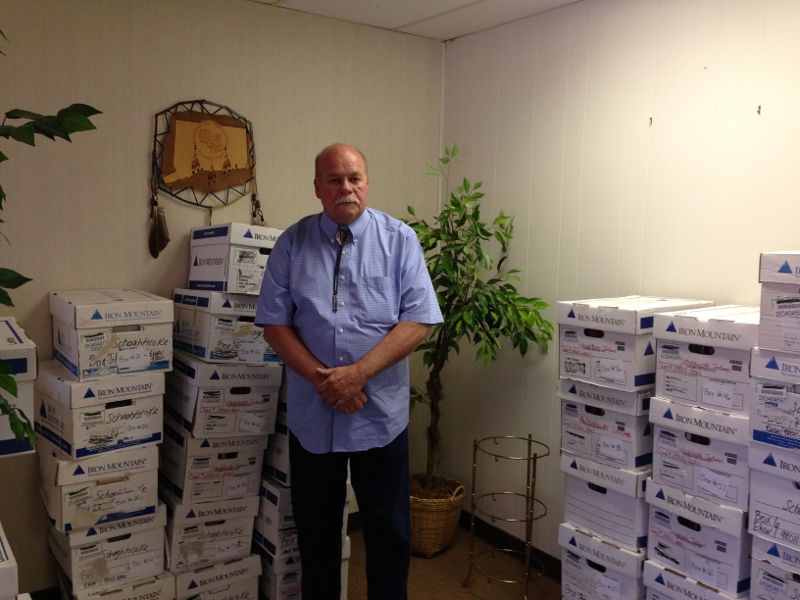 The Bureau of Indian Affairs in Washington, DC, has issued a draft proposal that would make it significantly easier for tribes to win federal recognition — and all the benefits that go along with that. But Connecticut Governor Dannel Malloy wrote to President Barack Obama requesting that three state-recognized tribes that have already lost their bids for federal recognition not be allowed to automatically qualify under the new rules, and the latest draft of the new regulations includes a provision that would give the state veto power over any application that is made by these tribes. The three tribes have cried political interference — again — and an expert on Indian law says they have a good case. Melinda Tuhus reports from New Haven.

The Schaghticoke Tribal Nation has 278 members and a 400-acre reservation in the northwest corner of Connecticut in the upscale town of Kent. Their ancestral lands comprised hundreds of square miles between the Hudson River in New York and the Housatonic River in Connecticut, featuring dense forests, waterfalls, and abundant wildlife.

Chief Richard Velky says the tribe began its quest for federal recognition in 1981 and has hundreds of thousands of pages of documentation to show for its initially successful application. He says designation would give the Schaghticokes more autonomy than they currently have, along with other benefits like “housing for our elders, health care for our tribal members, educational programs.” Velky adds that a casino could also be an option, but that wasn’t the motivation for pursuing recognition.

The new regulations, proposed by Assistant Secretary of the Interior for Indian Affairs Kevin Washburn after broad consultation, call for a tribe to show “community and political influence and authority from 1934 to the present” instead of since 1789. The proposed rules also eliminate the requirement that an external entity identify the group as Indian from 1900 to the present.

Governor Malloy’s office said he was unavailable for an on-the-record statement. In his letter to President Obama, Governor Malloy claims that three state-recognized tribes – the Schaghticokes, the Eastern Pequots and the Golden Hill Paugussetts – did not meet the existing criteria but that the Schaghticokes and Eastern Pequots were initially granted federal recognition a decade ago “because Connecticut’s maintenance of reservations implied that the State recognized the group as a political tribal entity.” The state appealed both rulings and won and federal recognition was withdrawn.

State-recognized tribes have the power to determine tribal membership, leadership and residency on reservation land, and the tribal form of government, and to regulate trade and commerce on their reservations. But Velky says state authorities have acted in recent years much more against the tribes’ interests than in support of them.

Malloy said federal recognition could be “devastating,” allowing the tribes to pursue land claims in several towns around the state. He asked President Obama to eliminate state recognition as the basis for granting expedited approval, and to eliminate the provision allowing groups that have previously been denied recognition, after appeals, to apply for expedited approval. In response to Malloy’s letter, the final draft wording requires tribes whose bids for federal recognition have been rejected to get approval from any third parties who previously opposed their recognition.

Chief Velky maintains the Schaghticokes fulfilled all the requirements and it was only intense — and inappropriate — pressure from Connecticut officials that caused the tribe to lose its federal recognition.  And now it’s happening again.

State officials — and local officials in the towns where the tribes are based — also oppose any more Indian casinos in the state, beyond the two big ones that two federally recognized tribes currently operate. Bruce K. Adams is the first selectman, the top elected official, of Kent, a town of 3,000 which includes the Schaghticoke reservation.

“My concerns for the Town of Kent, if these new regulations become law, is the fact that we would have a sovereign nation within the boundaries of our town and most anything could be done within those borders and the Town of Kent would have no say, no input over that,” said Adams.

Adams added that he was gratified that Connecticut’s top officials have formed a united front to prevent that from happening. He acknowledged that native peoples had “been wronged way back when,” but said he questioned all the rights that federal recognition now bestows on native groups that can qualify for it.

Eugene Fidell is an expert on Indian law at Yale Law School in New Haven. He says that while he has great respect for Governor Malloy, he doesn’t think his approach is the right one.

“I must say I am uncomfortable with the idea that the state — or any other third party — might have a veto over what really is supposed to be an executive decision by the federal government,” Fidell said. “If the state has an objection to the quality of the evidence that any state-recognized tribe is able to muster, then let the state come forward with its evidence. Let the state raise questions. But the idea of having the state have its finger on a veto switch, I think is very difficult to justify.”

A non-Native with aspirations to invest in a future casino with the Schaghticokes has already shelled out $20 million to finance their bid for federal recognition. Chief Velky says while a casino is not a priority, given the state’s fierce opposition to his nation’s quest and high cost of the bureaucratic battle, this funding is their only option.