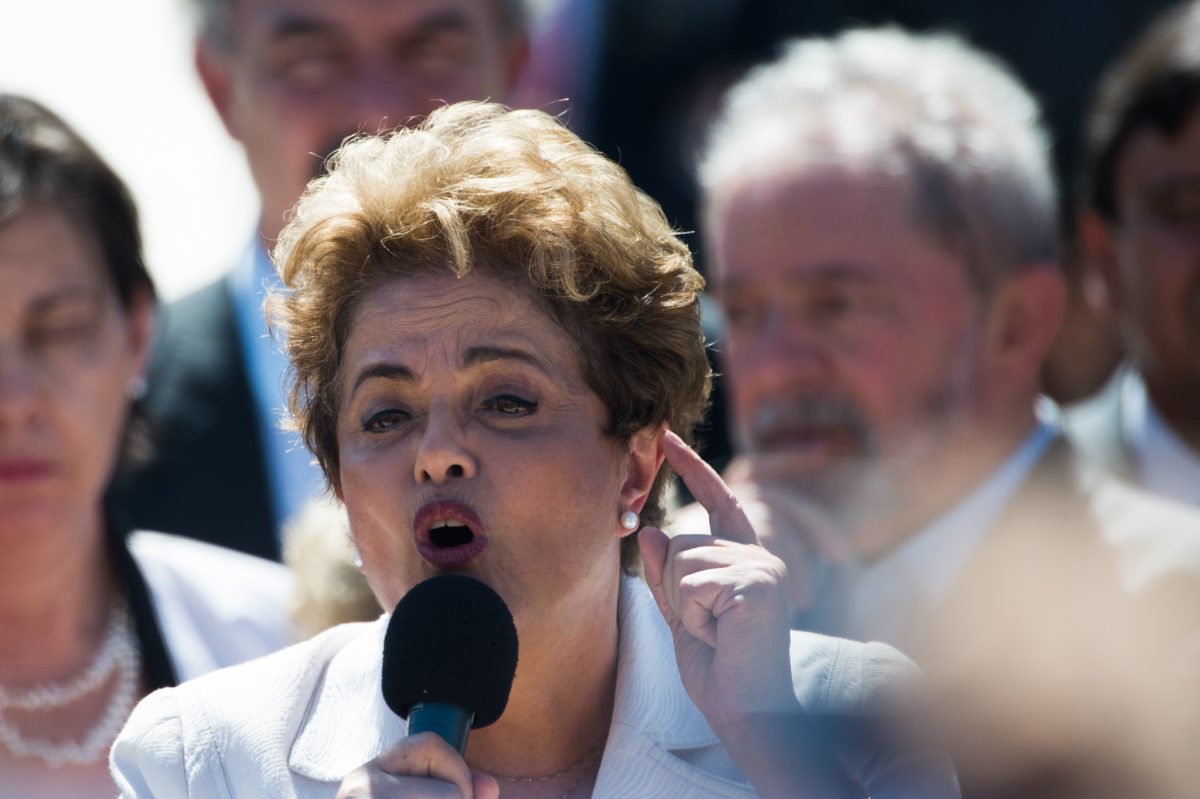 Dilma Rousseff speaks to supporters at a rally following the news of her impeachment as Brazil's president. (Photo credit: José Cruz/Agência Brasil via Flickr / Creative Commons)

Brazil’s Senate voted to impeach President Dilma Rousseff Thursday, thereby suspending the leader’s term in office while she faces trial on charges of fiscal mismanagement. The vote forced Rousseff to stand down immediately for at least 180 while her vice president takes over with a new cabinet. From São Paulo, Sam Cowie reports.

Brazil’s president Dilma Rousseff addressed the press and public Thursday morning, as she prepared to leave office for 180 days. She once again called the impeachment baseless and a coup, which was met with applause by supporters. She went on to blame the opposition, who she said never accepted her victory in the 2014 elections.

Rousseff lamented to the crowd that social welfare programs implemented during her leftist Workers Party’s 13 years in office may now be at risk. These thoughts were echoed by a few hundred anti-impeachment protesters on Paulista Avenue, São Paulo’s main thoroughfare, as the Senate began its all night marathon session ahead of the vote.

Public school biology teacher Francisco Gomes Luz says that he is against impeachment because Rousseff was democratically elected by 54 million Brazilians.

“What has happened is a huge set back. In the last 13 years of Brazil, we have seen great advances in terms of workers’ rights, education, new federal universities and colleges,” Luz told FSRN. “We have seen a lower class rise up and start going to university. All this brought about a huge improvement for Brazil, especially in the North East, where I am from.”

Hours after the Senate vote, Rousseff’s Vice President Michel Temer was sworn in as interim president. He then named an all-new cabinet, consisting entirely of older white men — a first in more than 30 years.

Brazil’s multiparty system sometimes requires ruling parties to form coalitions with other parties in order to secure enough votes to govern smoothly. That’s how Temer, of the Brazilian Democratic Movement Party, rose to the rank of vice president.

The professional relationship between Temer and Rousseff soured publicly months ago and many suspect Temer played a key role to ensure his predecessor’s ouster. Campaign finance violations prevent Temer from running for president and polls show he is even more unpopular among the Brazilian electorate than Rousseff.

Temer is, however, very popular with international investors and is expected to announce an austerity program, ostensibly to get Brazil’s flailing economy under control. The country is passing through its worst recession in 25 years and has been downgraded by all three of the top ratings agencies.

In the days building up to the impeachment vote, several protests were held and highways blocked. Anti-impeachment protests are planned for the next few days and should extend beyond.

Rousseff now has 180 days to prepare her defense ahead of her Senate trial, where a two-thirds majority is needed to oust her permanently.