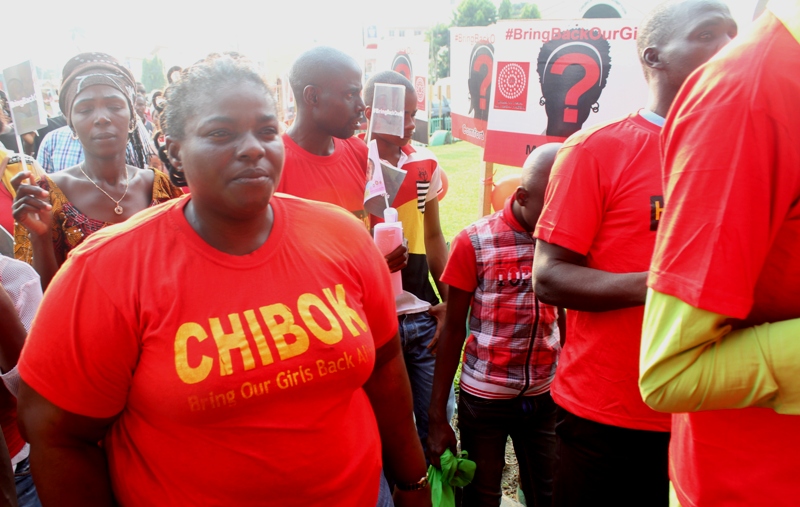 Nigerians and members of various rights groups took to the streets to mark 100 days of abduction of more than two hundred school girls by Boko Haram terrorists. They are also raising concern over the worsening security situation in Chibok where the girls were kidnapped 3 months ago. They want the Nigerian authorities to bring back the girls and ensure the safety of the members of vulnerable communities. FSRN’s Samuel Okocha reports.

Three months ago,  members of the terrorist sect Boko Haram forced their way into school dormitories in the northern Nigerian town of Chibok and abducted almost 300 girls. According to a presidential committee, 57 escaped while 219 remain missing.

The school girls’ abduction inspired street protests along with a global online campaign, forcing the government to accept help from foreign countries to find and free the girls.

“It’s now a hundred days that these girls are yet to be rescued. Let the whole world know that we are still anxiously waiting for all that are involved in the rescue mission to ensure that the girls are being rescued,” says Yahaya Chiwa. Three of his nieces were among the girls kidnapped.

At a rally Tuesday in Lagos, rights advocates groups raised concerns about deteriorating security since the girls kidnapping. Doris Yaro runs the group Gabasawa, and said people hardly live in their houses because of fear of terrorist attacks.

“You see people sleeping in the bush,” described Yaro. “Once it’s 5:00 p.m., those whose houses are still standing will go to the bush and sleep in order to avoid being attacked.”

Kaka Ibrahim lives in Chibok, and says children there are increasingly orphaned.

“In some houses, you only see the children; they don’t know what happened,” explains Ibrahim. “They cry, calling their mothers and fathers, but they are not there. They have been killed. Chibok area now is the most vulnerable place now. Everybody, day and night, are sleeping in the bush.”

“We need shelter for this people, so they can be settled in places, like Adamawa, that’s a bit safe,” says Chiwa. “They can create a camp there so that these people can be moved and taken to that place. Government can now come in, bring in medical facilities, and bring in people that can talk to those who are traumatized, the parents of these girls particularly. Some are very sick. They need medical attention. Medical people cannot go into the villages. They can’t, because the place is so risky.”

As Nigerians marked 100 days since the girls’ abduction, two explosions ripped through the northern Nigerian city of Kaduna, leaving dozens of  people dead. The first targeted moderate Islamic cleric Dahiru Bauchi, while the second was aimed at senior opposition leader Muhammadu Buhari. Both however escaped unhurt.

Boko Haram, an extremist group fighting for an Islamic state, has carried out a wave of bombings and assassinations in Nigeria since it launched a brutal insurgency in 2009.
(Photo Credit: Samuel Okocha)