Nigerians flee to Cameroon despite cross-border attacks by Boko Haram 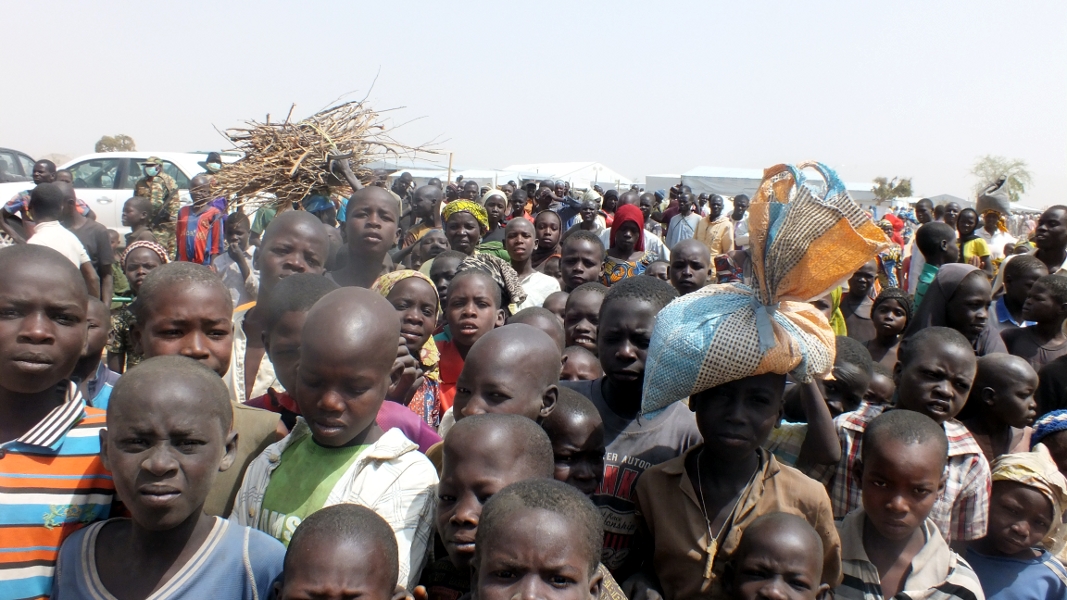 At least 36,000 Nigerians have fled across the border to the Minawao Refugee Camp in Cameroon.

The United States and France are urging other UN Security Council members to support a proposal to create and deploy a multinational counterinsurgency force to fight Boko Haram in West Africa. The proposal comes after the Nigeria-based militants reportedly pledged allegiance to the so-called Islamic State, a force which has taken over large areas of Iraq and Syria.

The New York Times reports hundreds of South African mercenaries are already operating within Nigerian territory. Nigeria claims to have taken back 36 towns from the insurgents.

Boko Haram has scaled up attacks in neighboring countries in recent months, despite troop deployments. The militants have been carrying out cross-border raids on Cameroon, slaughtering citizens, stealing food and torching whole neighborhoods. This has led to a worsening refugee crisis in the region. FSRN’s Ngala Killian Chimtom visited some of the conflict zones in the country’s Far North Region and files this report.

Cameroonian soldiers stationed in the Far North Region sing a war ballad about atrocities committed by Boko Haram and the soldiers’ intent to annihilate the insurgents.

“They cannot defeat us, because we are ready at any moment, any time, to defeat the Boko Haram,” says staff Sergeant Ayafac Basil is one of about 6000 Cameroonian soldiers deployed to the border region to fight Boko Haram. “We are waiting for them, to see what they will do. The government is behind us, they give us everything that we want, we are ready and prepared to face the Boko Haram, and we will defeat them.”

The insurgents have in the past two years intensified attacks here, slaughtering civilians, stealing cattle and food as well as torching whole villages.

One of the most murderous Boko Haram raids on Cameroon occurred in early February in Fotokol. The militants killed dozens of people and torched the entire village, including a mosque.

Oumarou Mustapha was in the Fotokol Central Mosque at the time of the attack: “We started prayers in this mosque at 5:30. They attacked at exactly 5:40. We heard their gunshots and they were saying “Alah Akbar, Allah Akbar”.The moment we heard that, we stopped prayers at 5:45 and I left the mosque. The terrorists they surrounded the mosque, opened it by force, and started killing our brothers. About 37 people were killed and eight others injured.”

The El-Beid Bridge separates Fotokol from the Nigerian Boko Haram stronghold of Gambarou. The once bustling town, like other villages along Cameroon’s porous border with Nigeria, is now deserted.

A few miles away is Kolofata, home to the regional military base. Cpt. Serge Njankouo is the man in charge here. “The frequency of attacks is not too high, but when they decide to come and attack Kolofata, they will gather all their means; all their tanks, all their machine guns and come because they know it’s the headquarters,” he told FSRN. “They always surprise when they come to attack Kolofata.”

The Boko Haram offensives throughout northeastern Nigeria and northern Cameroon have forced tens of thousands from their homes. While Cameroon grapples with the problem of internally displaced persons, the country faces a crisis when it comes to the influx of refugees from Nigeria.

The Minawao Refugee Camp for instance is now home to some 36,000 refugees; all of them from Nigeria.

“We are fourteen in number in our family,” says 41 year-old Mohamadou Ousman, recounting the bitter circumstances of his departure from his homeland. “I am the first born. They killed all my brothers. Boko Haram, they will come and attack you, and ‘can you join us?’ When you say no, they will kill you. My mother advised me to go away. I asked her ‘when I go, who will give you food?’ She said no, I should go.”

It took him three days walking through the forest without food to reach the relative safety of Cameroon. Ousman doesn’t know where his mother is, or if she is still alive.

The urge to go back home is strong among the refugees here. But Ousman says he won’t go back to Nigeria, if the violence doesn’t stop. Yet his stay in Cameroon is tinged with fear – the fear that Boko Haram might strike, even here.