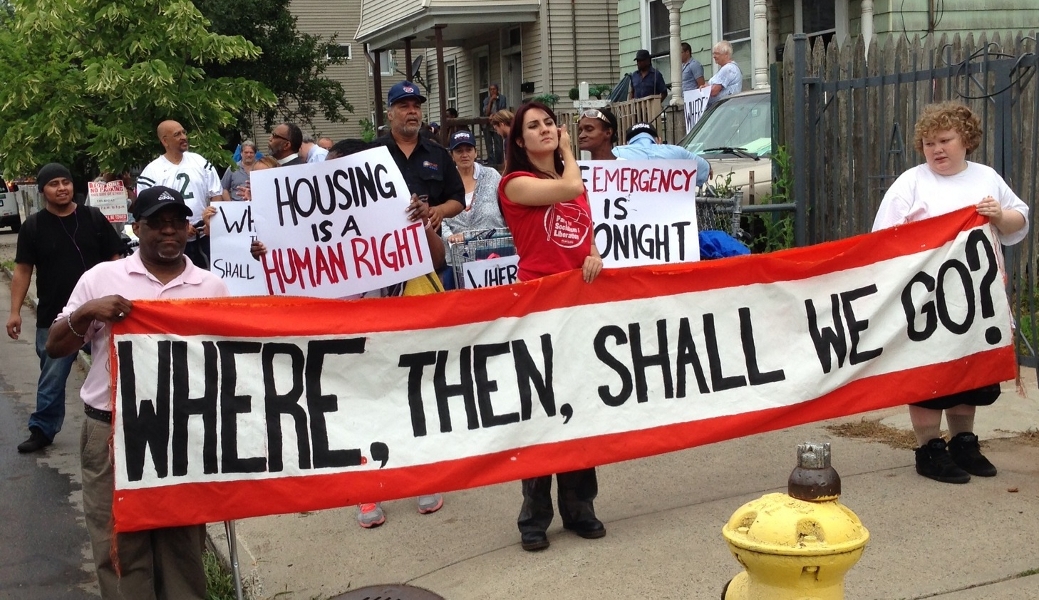 Three dozen people — homeless residents of New Haven, Connecticut and their supporters — marched ten blocks from a Catholic Worker house of hospitality to an empty city lot in a low-income neighborhood to set up a tent encampment Thursday. It’s the second such encampment erected on city property in the past two months. They are hoping to pressure the city into providing more public housing, and to stop criminalizing those who try to sleep outdoors. New Haven is among many cities nationwide that have laws on the books aimed at the homeless population.  Some states go so far as to make it illegal to simply  sit or lie down in certain public places. Melinda Tuhus reports.

Carrying signs that read, “It’s not a crime to be homeless,” and “The emergency starts tonight,” more than 30 people gathered for some inspiration before heading off towards an empty lot in New Haven’s Hill neighborhood.

Floyd “Rico” Jones, who identifies as homeless, said violence is one of the risks frequently faced by the homeless population. “The idea of this here is to sit back and give someone a place to go without having a problem from the police or anyone else,” he told rally participants. “To make sure someone has someplace safe to live, so they can sit back and have a clean atmosphere, a safe place for their stuff to be, and a safe place for them to sit back and live without fear of somebody else hurting them.”

On its way to the vacant lot, the march passed a building providing elderly housing. A resident first asked what was going on and then expressed support: “I think it’s a good idea because I have took in several homeless people myself. But I got in trouble for having people living here that wasn’t on my lease, so they had to leave. But I try to help as much as I can, cuz I feel sorry. I have friends that’s homeless. I used to be homeless myself, so I know how it feels to be out.”

Marchers arrived at a fenced in empty lot between two triple-decker houses. There was no gate, so people streamed in, one pushing a lawn mower to cut the grass while others trimmed back the bushes. They carried out an old couch and a living room chair. Then they set up tents and held a community meeting.

A mile away, at City Hall, mayoral spokesman Laurence Grotheer said Mayor Toni Harp would announce on Friday the progress the city has made toward housing New Haven’s long-term homeless population, and also a new program to help house homeless veterans. He then addressed what the people camping on the city-owned lot could expect, saying it is “a non-conforming use of city property and so I would expect appropriate city departments to respond as necessary. There are issues about liability. There are issues about health code violations.”

Martha Okafor is the city’s community services administrator and the point person on homeless issues. She said New Haven budgets more than a million dollars a year on services for the homeless – more than any other city in the state and over and above the budgets of direct service organizations. She disagrees that the ban on sleeping outside on public property criminalizes homelessness. “We at City Hall do not believe in criminalization of people who are homeless,” Okafor told FSRN. “That is the reason why we have partnership addressing the issue around homelessness. The people that are staying outside, the question is, really, how many of them are truly homeless?”

Okafor says only three people accepted an offer of beds at homeless shelters after a similar protest in May. Some homeless people prefer to avoid shelters because of the rules in place at many of them or the fear of living in unsupportive close quarters.

Thursday afternoon, protest leaders said they were meeting with the neighbors, some of whom were upset at the pop-up neighborhood in their midst. But the newcomers shared their lunch and passed out free vegetables, and said the mood was mellowing.