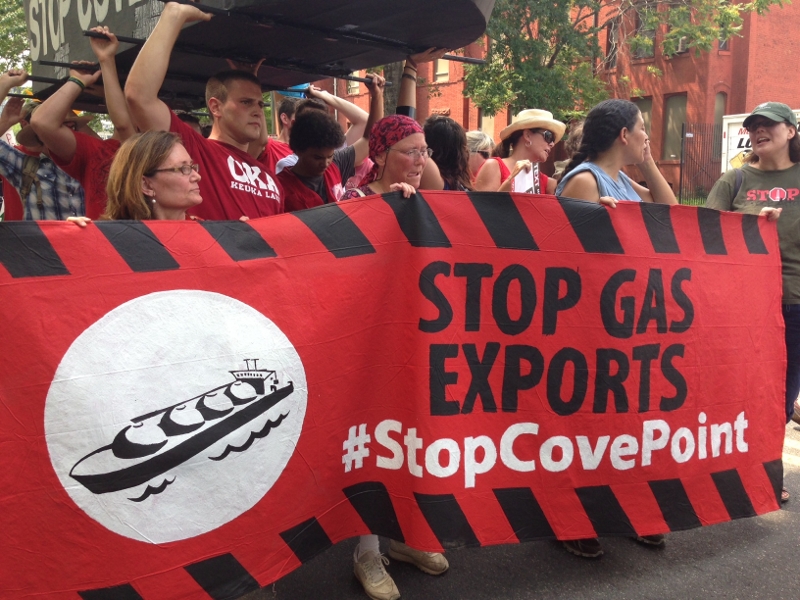 On Sunday afternoon, about 2,000 people marched in the heat of mid-summer Washington,D.C., from a rally on the national mall to the Federal Energy Regulatory Commission; the first-ever demonstration at FERC. They were protesting what they called FERC’s rubber stamp approval process for an export facility for liquified natural gas, or LNG, in a heavily populated area of southern Maryland called Cove Point. It’s one of 14 such proposed facilities around the country. Much of the natural gas slated for export would be extracted through the process of fracking, which is already happening in the Marcellus Shale formation located in parts of New York, Pennsylvania, West Virginia and Ohio. That’s leading anti-fracking groups to form an alliance with opponent of LNG export terminals. Melinda Tuhus reports from D.C.

Busloads of Cove Pointers arrived in red t-shirts for the rally on the Mall in Washington DC.

Claire Zepko was there with her children, ages two and six. “We’re extremely frightened,” she said. “We’re worried about the long-term effects from the emissions of all the nasty chemicals that are going to be dissipating into the atmosphere. Dominion’s bought pollution credits from Frederick,Maryland, but that does absolutely nothing for our air quality down on Cove Point.”

Residents and advocates like the Chesapeake Climate Action Network – CCAN – which organized the rally, want FERC to require Dominion, the owner of the liquefied natural gas terminal, to do an Environmental Impact Statement or EIS, in addition to the less comprehensive Environmental Assessment it conducted. A FERC spokesperson said she couldn’t comment spcifically on Cove Point, but that if a full study was done when the site was developed several years ago as an LNG import, not export, facility, another one would not be required since the new proposal does not exceed the footprint of the existing facility.

Mike Tidwell, founder and executive director of CCAN, said the export plans involve “completely different industrial machines, totally different process, much bigger, much more dangerous, and FERC doesn’t think there should be an Environmental Impact Statement. They think the EIS from 2006 for a $700 million facility is enough to cover, in 2014, a $3.8 billion facility. It’s ridiculous.” Tidwell said this is the only LNG proposal in the country that’s planned for a populated area.

Local resident Claire Zepko calls Dominion’s plans to expand the facility incompatible with the reality of a neighborhood in which children bike up and down the street and play in a park directly in front of the plant. “They’re going to add a liquifaction train that’s like, two football fields long and a hundred feet high and it’s going to be running 24/7. They’re adding a 130-megawatt power plant to the site that they’re going to run off natural gas turbines.”

She said Dominion ignored industry guidelines that such facilities should be built only in remote areas, adding that the county actually waived the zoning requirements so they could turn it into an industrial area.

One of the speakers at the rally was Sandra Steingraber, a biologist, author and a leader of the anti-fracking movement in New York. She said their destinies are intertwined, because LNG exports would lead to an increase in fracking. She noted the success of a movement to ban liquified natural gas production in New York State following an explosion in Staten Island in 1973 that killed 40 people. She said the safety concerns remain, but what has changed is that in 1973 people didn’t know yet about climate change and had never heard of fracking. So the stakes are even higher today.

Mike Tidwell of CCAN said FERC does more to facilitate the production of natural gas than to regulate it. “They facilitate fossil fuel projects. They’ve never denied a major electrical or gas project ever presented to them – ever. So they’re an isolated, non-responsive commission that does not take into account public safety or health and instead all they do is try to further the profits of the fossil fuel industry.”

Plans to increase the nation’s natural gas export infrastructure come as Europe’s largest gas supplier – Russia – is locked in a dispute with Ukraine, where key pipelines carrying Russian gas to Central and Western Europe are located. Are export facilities like the one in Cove Point meant to step in to fill a need at a moment of political crisis?

In a phone interview before Sunday’s rally, Tyson Slocum, director of Public Citizen’s Energy Program, explained how the business works: “All the trade from LNG exports are going to be typically structured as 20-year, locked in deals, where nearly all of the export capacity is already slated for specific customers. Not a single bit of this is slated to go to Ukraine or anything like that. These are not national determinations; these are private marketplace determinations, depending upon who negotiates the supply agreements.”

FERC’s decision is expected in the next several months. The Maryland Public Service Commission must also given an opinion on whether the proposed LNG export facility is in the public’s interest.

Monday morning, opponents of the Cove Point LNG export terminal escalated their tactics when 24 people were arrested for blocking the FERC entrances. They were cited, fined and released.