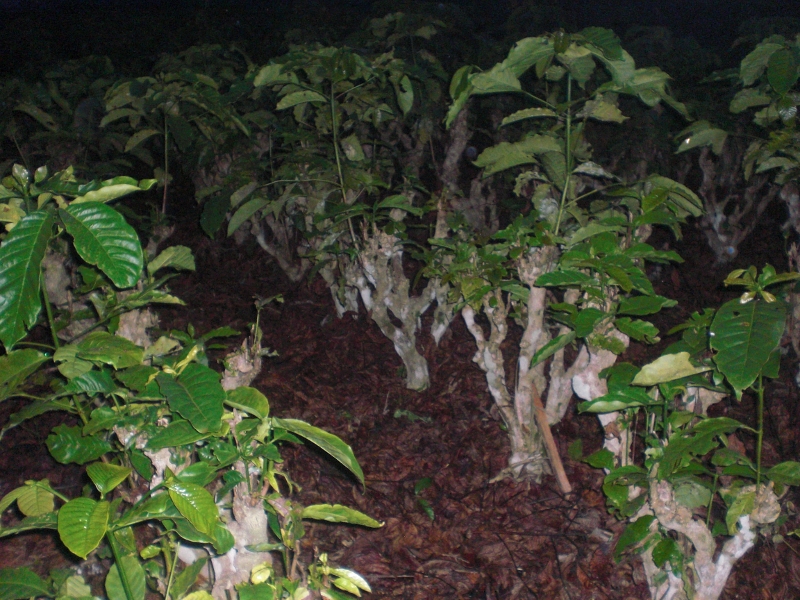 The government of Cameroon has launched a wide-ranging program to rehabilitate old coffee plantations and open up new ones in an attempt to revive its once-flourishing coffee sector. The central African nation used to be one of the world’s largest coffee exporters, but structural adjustment programs implemented in the wake of a financial crisis more than 20 years ago forced the government to end price guarantees and trade protections for coffee producers. FSRN’s Ngala Killian Chimtom traveled to Cameroon’s coffee producing region and files this report.

It is 5:30 PM in Nguelemendouka,a rural community in Cameroon’s Eastern Region. 55-year old Ebane Sol Blaise Lebon is still working on his seven and a half acre coffee plantation. It is a tedious exercise that involves manual weeding and pest control. He works daily, from dawn to dusk, in the hope of reviving the yield.

Twenty years ago, Ebane could harvest up to a hundred bags – or 13 thousand pounds – of coffee from the land. But not anymore. “These plantations don’t yield anything now because we don’t have fertilizers,” says Ebane. “We have been given herbicides, but we do not know how to use them, and they instead seem to harm the farms. Per-hectare productivity is falling. So I can cultivate three hectares of land and not harvest up to twenty bags of coffee in a year.”

The government suspended subsidies to the coffee sector more than two decades ago in the wake of an economic crisis. As a result, many farmers abandoned their coffee plantations, which suffered from neglect.

According to the Coffee and Cocoa Inter-Professional Council, Coffee production in the Central African country has plummeted by 56% over the past three years. Maledy says when the government eliminated subsidies and trade protections for the sector in the 1990s,the costs of inputs -like fertilizers– spiked. The increased costs of production, coupled with low market prices at the time discouraged farmers, many of whom turned to food crop cultivation instead.

Memories of better days are often part of discussions among villagers here. The absence of government subsidies and lack of regulations which fix minimum prices have allowed middlemen to take advantage of small-scale producers.

Coffee farmer Laurentine Mengue says she is often unable to cover the cost of production, much less profit from her labor. “Middlemen come here and with just twenty dollars, they get a bag of coffee, and we know they can resell it for at least 50 dollars,” she told FSRN. “I think the state needs to fix prices for coffee. We find it hard selling our product, especially with fluctuating prices.”

The government of Cameroon has launched an initiative to dramatically increase coffee production by 2020. To do this, the National Cocoa and Coffee Inter-Professional Council developed an emergency program to fast-track production.

Its Executive Secretary, Omer Gaetan Maledy says the program involves working with farmer cooperatives in the country’s main production basins. “We have a program in the CICC named New Generation,” he explains. “New Generation is a program for youths. In this program, we introduce 200 young people every year, and we give them support over three years. From next year, we will be having 600 young people every year. That gives me hope that we will re-launch this sector.”

The Cameroon Minister of Agriculture and Rural Development, Essimi Menye has said the government will once again subsidize the sector to help farmers get inputs like fertilizers and insecticides.

Even if Cameroon were to meet its production targets, better marketing strategies are necessary. Marti Foncha of the African Coffee Trading Group says only 5% of Cameroon’s coffee is processed locally. But his group has developed approaches that would allow domestic producers to charge a higher price for their coffee.

“The coffee that we pulp, we don’t wash,” says Foncha. “We take a lot of care to dry it very, very quickly, so it doesn’t get moldy. When that coffee is dry, we’ve developed a new market for roasting…We roast it completely in its parchment, we don’t shell it. We preserve the sugars and the flavours that comes from the sugary muselage, when somebody roasts it and grinds it and makes a cup of coffee, it becomes a very different drink; it doesn’t taste harsh like coffee, it’s like a nice herbal drink with a coffee background.”

Figures from the National Institute of Statistics indicate that over six million Cameroonians depend on coffee for their livelihood. And with prospects that the crop will continue to grow in importance globally, Maledy believes boosting production is critical to the revival of Cameroon’s economy.