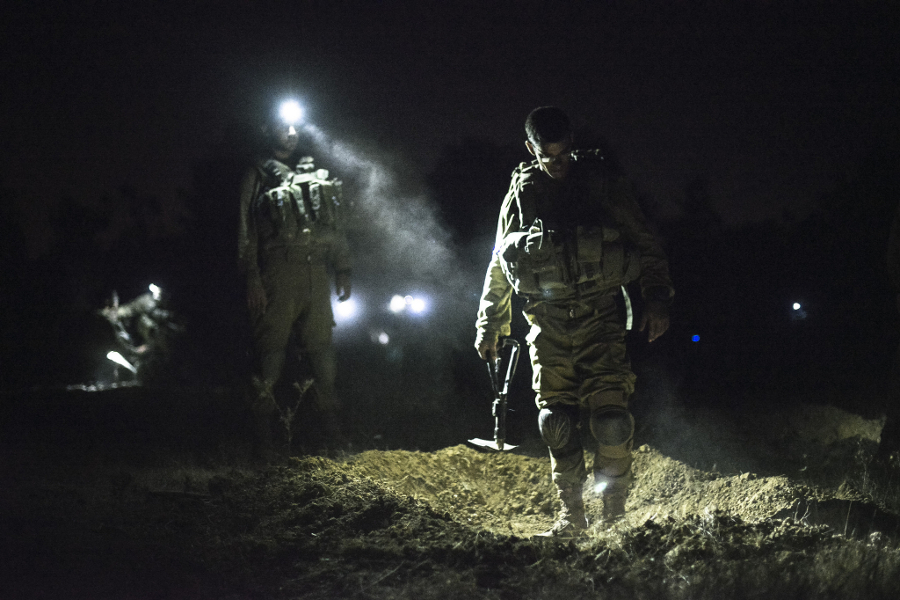 The death toll in Gaza is on the rise as Israeli tanks moved into to the territory Thursday. Medical sources say more than 260 Palestinians have been killed, and according to the United Nations the vast majority were civilians. One Israeli soldier died on the first day of the ground invasion, the second Israeli fatality within the context of Operation Protective Edge. According to the Palestinian Health Ministry, at least another 20 people died before dawn Friday.

The ground invasion has prompted thousands of Palestinians to flee their homes in the northern Gaza Strip. On Friday, the United Nations Relief Works Agency – or UNRWA – estimated at least 40 thousand residents of northern and southern Gaza have sought shelter in other parts of the Gaza Strip.

UNRWA spokesperson Chris Gunness: We are basically doing emergency food, emergency water, providing hygiene because they are taking refuge mainly in UNRWA schools which are built for a thousand kids to come and get an education in, not for thousands of people to come to for days and days of permanent accommodations.

Shannon Young: What’s the biggest challenge the agency is currently facing on the ground in Gaza?

Chris Gunness: Security. Security, security, security. We are very concerned that as in Operation Cast Lead in 2008 and 2009, UNRWA facilities may receive direct hits, as they did then, most worryingly in those days by white phosphorus. And we hope that that sort of incident will not occur again; when the Israeli Army hit us with white phosphorus, but we only have to pray that all parties and we appeal to all warring parties to respect civilian life and the sanctity of UN property and of course, humanitarian workers.

Gaza’s only rehabilitation hospital for paralyzed and disabled patients was severely damaged  by Israeli shelling Thursday. The El-Wafa hospital had sustained other attacks in the past week, including a missile strike Wednesday which hit a wing for elderly residents. The Israeli military claimed rockets had been fired from the area.

Joe Catron is an International Solidarity Movement activist who volunteered at the El-Wafa hospital. He says he neither saw nor heard evidence of what he could identify as rocket fire from the vicinity of the hospital.

Joe Catron: There were any number of military sounds in the area. We mostly stayed inside the building for reasons of safety. But the loudest by far were those coming from the Israeli side – tank shelling, air strikes and the constant drones overhead … certainly that was the military activity that was closest to the hospital. I never heard anything closer about which there could possible have been any doubt.

Sanitation services in the region have also been hard hit. Only about half of the region’s sewage treatment facilities are operational and UN health officials are concerned about an outbreak of waterborne disease.

The Gaza Strip lacks underground bomb shelters. With no designated safe place to wait out the airstrikes, many residents of the Gaza Strip have been staying indoors out of fear. FSRN’s Rami Almeghari has more from Gaza.

In the Maghazi refugee camp in the central Gaza Strip, the Altall’a family just finished their breakfast or Iftar meal, following a prolonged fasting day during Ramadan. Like thousands of families here, the Altall’a household has been living under a cloud of stress in the past days due to the continuous Israeli army shelling in the area.

Abu Yazeed Altall’a is the head of the eight-member family. “We are not just numbers, and it appears we have turned into merely numbers in the eyes of the world,” he said. “How can these countries remain patient towards the wholesale killing of us? Where is their humanity?”

The Altall’a family lives in a modest home in an alleyway of the Maghazi refugee camp. Abu Yazeed Altalla’s wife, Um Yazeed fears for the well-being of their six children. “Sometimes, my son wants to go to grocery store to buy a yogurt or something. I then start to worry that he may not return back home safe,” she told FSRN. “A while ago, my son and daughter were too scared to go outside to fill up the gas canister. I know this fear will impact them in the future.”

Power outages in Gaza now last up to ten hours a day due to massive damage to electrical infrastructure. On Thursday, the Israeli cabinet announced the military campaign will continue for more than a week, now with a ground invasion.

Only a tiny minority of Gaza residents with foreign passports have been able to flee the enclave. Most of the civilian population – including the eight-member Altall’a family – have nowhere to run… and nothing to do but hope for the best.